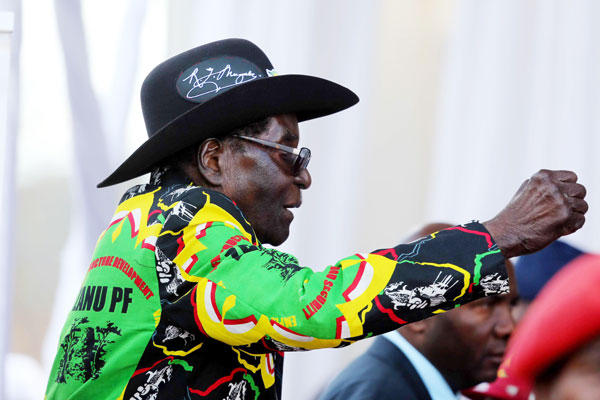 Picture the scene: throngs of people gathering as the night descends. They are looking up at the building across the way—patiently, expectantly. There is a low-hum of voices. Gradually, the voices converge and they begin singing the same song…

Finally, the bespectacled 93-year-old Robert Gabriel Mugabe steps out on to a veranda of his residence, known as Blue Roof. He lifts his arms, the crowd hushes, and he begins to sing a torch song which captures the emotional heft of his fellow Zimbabwean patriots and inspires people in the crowd to hug each other and think that there was someone who was one of them in a position of power.

This musical extravaganza will never be produced on Broadway, and Robert Mugabe will never get the Evita treatment—and not just because Mugabe’s mansion in the Borrowdale neighbourhood of Harare and the roads leading up to it are famously closed off to visitors. Rather than being his own Casa Rosado, Mugabe’s Blue Roof is now essentially his prison. When the military ousted him from power in November, they placed him under house arrest. Since his resignation on 22 November, Mugabe has presumably been spending his time in his house along with his wife, Grace.

Yes, some friends and I would joke about writing a Mugabe musical when we were studying in Zimbabwe. In case you think this sounds crazy, one of my dear friends and I also survived our methodology courses in grad school at Iowa by creating an Ice Capades-style musical called Regression! On Ice!

These ideas came back to mind over the past month as I watched the political turmoil in Zimbabwe. After 37 years in power, Robert Mugabe is out—and almost no one saw it coming. He bested political rivals. He survived a number of reported health scares. He made a strategic alliance with the military and the war veterans to keep himself in power…until they turned on him. Mugabe wasn’t forced out by popular protests or public uprising; his ouster and the inauguration of his former vice president, Emmerson Mnangagwa, was an inter-party struggle played out on an international stage.

In many ways, Mugabe’s life mirrors a four-act musical (with a two-album original cast recording!)—and those four acts tell us a lot both about how Mugabe managed to survive for so long and how his political luck finally ran out.

Mugabe establishes himself as the leader of the African nationalist and anticolonial movement in what was then Southern Rhodesia. He presents himself as a Marxist and calls for a socialist revolution in the country. In 1980, when Zimbabwe holds its first independent multiracial elections, Mugabe’s Zimbabwe African National Union wins the largest number of seats, and Mugabe becomes Zimbabwe’s first prime minister. This is his “Don’t Cry for Me Argentina” moment.

Despite his Marxist rhetoric, Mugabe establishes a reputation as a pragmatist who can work with the West and sets about improving living standards. While the public image is one of happiness, there is turmoil behind the scenes. Mugabe oversees the Gukurahundi, a terror campaign directed against supposed political rivals by a North Korean-trained military brigade. He supports the military and provides generous benefits for the veterans of the Second Chimurenga, and they return the favour by pledging their support. All seems well. Cue “You Will Be Found” from Dear Evan Hansen.

Poor harvests and economic problems are leading to popular discontent in the late 1990s. An opposition movement—the Movement for Democratic Change—emerges, presenting Mugabe with his first genuine electoral challenge. Mugabe draws on his support from the military and war veterans to attack and kill opposition supporters. This helps him win elections, but he is subject to increasing domestic and international criticism. He becomes more delusional, saying that he will rule until he dies. Colleagues jockey to position themselves as next-in-line to rule, but he undercuts anyone who gets too powerful. Eventually, he faces a stark choice—should he support his vice president, Mnangagwa, or his wife Grace? The military has publicly proclaimed that they will not support a leader who did not fight in the guerrilla war, putting themselves firmly behind Mnangagwa and in opposition to Grace. As the music swells toward the end of the act (I’m thinking something like “The Last Supper” in Jesus Christ Superstar), Mugabe fires Mnangagwa. He’s going with Grace.

The military fights back. Tanks appear around Harare, and members of the military take over the state broadcaster. They announce that they are in charge and that Mugabe is under house arrest. This sort-of coup leads to confusion, but also inspires public outcries that Mugabe needs to resign. His political party kicks him out. The parliament begins impeachment proceedings—but they are interrupted by the announcement that Mugabe is resigning. It’s seemingly a moment of triumph (like “For Now” from Avenue Q or “Tomorrow Is a Latter Day” from Book of Mormon), but the removal of the guy who has been the heart of Zimbabwean politics (for good or evil) actually introduces uncertainty (think “Who Lives, Who Dies, Who Tells Your Story” from Hamilton).

What does any of this tell us?  First, it shows us that the same military that kept Mugabe in power for so long brought about his demise. Rather than mindlessly supporting Mugabe, the military was looking out for its own interests—and it was willing to get rid of Mugabe when he no longer served their interests. Second, Mugabe’s legacy as a leader of the independence movement gave him a lot of domestic and international credibility. He traded on his liberation credentials, and many deferred to him even when he was carrying out nasty attacks against perceived enemies. Third, these movements within Zimbabwean politics really are confined to a small number of people. This is not a popular movement—yet. Mugabe has found ways to thwart the political opposition in the past, but we now get to see what happens to the opposition and whether it can organize itself in Mugabe’s absence.

And finally, it proves once and for all that the world—and international relations—needs more musicals.

Philosophy of Law and the Decline of War

Look What You Made Me Do