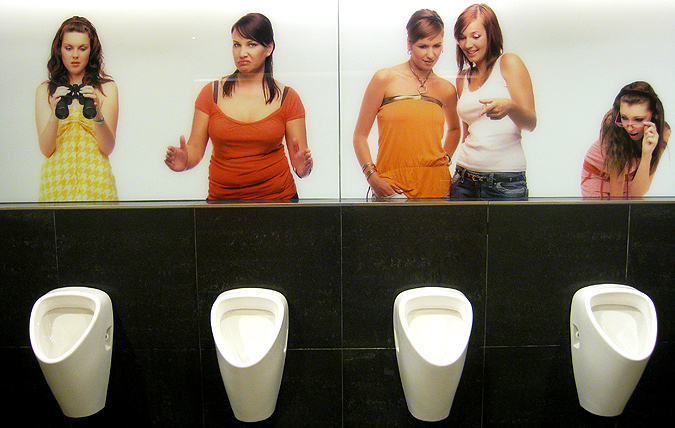 Any woman would tell you that. What matters is what you do with it and whether you know how to use it. Whatever Brobdingnagian thing you’ve got going on there, it’s way more important to have a game plan and understand the sweet spots you need to target. Otherwise, both parties may come away less than satisfied from the encounter.

I am talking, of course, about the nuclear arsenal size and the ever-lasting dick-measuring contest that is international politics. After the ridiculous Trump tweet that Kim John Un’s nuclear button is smaller and less powerful than that of #45, IR Twitter was quick to point out Carol Cohn’s seminal “Sex and Death in the Rational World of Defense Intellectuals” article that discussed exactly that. That the world of arms race is essentially a world of phallic worship and missile envy, replete with “penetration aids”, “thrust capabilities” and “vertical erector launchers”.  Who knew that a presidential candidate who mentions the size of his penis during a primary debate would actually bring it up during an international nuclear stand-off?!

Another piece that comes to (my) mind is the book by Stephen Ducat “The Wimp Factor: Gender Gaps, Holy Wars, and the Politics of Anxious Masculinity”. As he observed, the ‘wimp factor’, i.e., the possibility of coming off as too feminine in politics is a major fear in many cultures, spanning from ancient Greece to modern United States. In a culture with a generalized ethos that equates penetration with domination, political hierarchy is often built along the same lines that glorifies ‘real men’ ‘with balls’ hence denigrating femininity and non-cis-gendered males and females. The wimp factor is especially relevant for global politics built on notions of hierarchy, and is often expressed in terms of gender, which favors the male, dominant position.

Don’t worry, Americans, you are not alone! Russians do that too! Albeit, the Russian President doesn’t really do penis jokes, just occasional quips about parasitic worms pulling a Steve Bannon. The electorate, however, is often less subtle. When sanctions against Russia at the height of Ukraine crisis in 2014 were introduced, there was a flash mob ‘Fashion response – no to sanctions’ [Modnyi otvet – sankciyam net], where a fashion designer Anastasia Zadorina distributed T-shirts with ‘patriotic messages’. The ‘patriotic messages’ included images of Russian rocket launchers ‘Topol’ (SS-27 Sickle B) and ‘Iskander’ (SS-26 Stone) that would ‘laugh’ at the sanctions. See for yourself of you can spot anything phallic in the design: 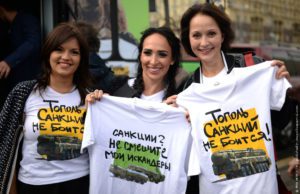 Given that Ms. Zadorina has become the official Russian Olympic uniform designer, the “fashion response” was deemed at some point both patriotic and appropriate. Of course, if you go deep in the underbelly of Russian social networks, you will find virtual saber-rattling that also feminizes Russia’s geopolitical opponents – bigly. Some social network users suggested ‘to stick sanction in your own Europe’, playing on the similarity of the Russian word for behind and Europe, and at the same time denigrating Europe as a feminized entity on the receiving end of a homosexual act. I am not even mentioning the comparisons of Ukraine with a loose woman, who sells herself to the ‘Atlantic syndicate of thieves’ and ‘international community of perverts’. Russia is then represented as Ukraine’s older brother, who is tired of ‘the organization of a brothel’ in his apartment [Post-Soviet space]. Well, after Russia grabbed Ukraine by the Crimea, online jingoists seemed to have satisfied their missile envy. I just hope that it wouldn’t take a thermonuclear war for the toddler-in-chief to satisfy his.