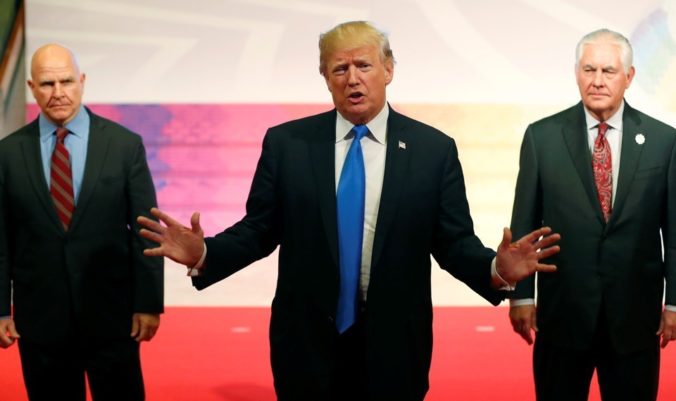 What a time to be alive. By some accounts, we are witnessing a power transition between the United States and China, with the United States voluntarily relinquishing its claim of global leadership despite having a sizable advantage in hard power over all of its rivals.

Evan Osnos, who spent many years in China writing for the New Yorker, has a provocative piece that sums up his view of Trump’s foreign policy one year in, “Making China Great Again.”

The Chinese, he writes, have a clear-eyed assessment of what the Trump administration has become:

After the summit, the Pangoal Institution, a Beijing think tank, published an analysis of the Trump Administration, describing it as a den of warring “cliques,” the most influential of which was the “Trump family clan.” The Trump clan appears to “directly influence final decisions” on business and diplomacy in a way that “has rarely been seen in the political history of the United States,” the analyst wrote. He summed it up using an obscure phrase from feudal China: jiatianxia—“to treat the state as your possession.”

The Trump administration’s withdrawal from the Trans-Pacific Partnership gives China an opportunity to define trade rules in the Asia Pacific. The intended withdrawal from the Paris climate agreement allows China to reap diplomatic kudos by staying in. These moves among others are gifting China an opening to exercise greater influence than ever before.

It may be too soon to make that pronouncement of a power transition, let alone a peaceful one. The Trump administration seems determined to keep us guessing on whether it will go to war with Iran or North Korea first. I for one am not looking forward to attempted “bloody nose strikes” on North Korea.

On that score, The Atlantic has a new piece by Uri Friedman in what I call McMasterology. The author profiles the thinking of Trump’s national security advisor, H.R. McMaster, by taking some of his select quotes alongside some of the academics he has praised. McMaster apparently does not believe conventional deterrence can work with North Korea. Why? Too many states with nukes appears to be one reason but other reasons seem to derive from McMaster’s view of how the international system in changing.

Among McMaster’s sources of inspiration is a piece by Grygiel and Mitchell in The American Interest. They write about how we are witnessing the return of geopolitics with attempts by China and Russia to test the limits of America’s international commitments by proxy probing efforts in their near abroad. While I think this is an important observation (that is captured in the new national security strategy), I don’t think this has anything to do with North Korea’s nuclear program, where trying to deter regime change seems to be the most obvious and likely explanation.

I am not sure if we have much of an idea what’s really going on in the thinking of the Trump administration on foreign policy and national security, on North Korea specifically or more broadly. It seems like a fractious contested space, where the direction is still up for grabs. I still do not have a feel for how much direct control the president himself exercises over policy and how much he has delegated to others.

Perhaps the adults are in charge, but moves on the Trans-Pacific Partnership, the Iran Deal, North Korea, NAFTA, NATO, immigration, Jerusalem, climate change, suggest major deviations from both the Obama administration and conventional internationalist foreign policy, both Republican and Democrat.

The net result was to give the United States a reputation for parochialism and unreliability, something inconsistent with its role as an ally and its hard-earned reputation for global leadership.

U.S. abdication doesn’t obviously redound to China’s benefit, but may just contribute to widening disorder in the international system or “disarray” as Haass calls it in his most recent book. For her part, Elizabeth Economy doubts that China will be able to seize this moment to their advantage. They are as bad at currying international goodwill as the Trump administration and are limited in a number of other respects. She writes:

Let me offer an alternative argument: We suck, but China does too. The truth is that neither the United States nor China is currently up to the job of forging the type of consensus that addresses global challenges and advances the international system writ large. The only difference is that the United States now has a leader who makes clear that he simply doesn’t care about the rest of the world while China has a leader that at least pretends to care.

If Economy is right, we are perhaps more likely entering in to the disarray Haass described, what Ian Bremer called G-Zero, or Kupchan’s No One’s World. All of that is bad news for peace and stability in the international system.

The Return of Geopolitics