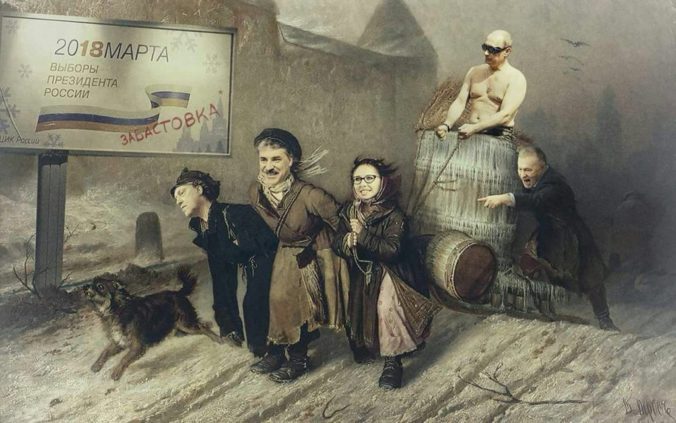 One of the most predictable elections is just around the corner: even Google has already proclaimed Putin the winner of the presidential race of March 18th 2018 in Russia. The only marginal hiccup for the authorities might be a low turnout, but a couple of viral videos are already scaring the bejesus out of the electorate: if they don’t show up and vote for you-know-who, somebody else will be elected and they will make each family house a gay man in pink pajamas in their apartment!

Surprisingly enough, Putin will have a wee bit of competition on the ballot after all. Pavel Grudinin [I am very tempted to translate his name as ‘boobilicious’], a candidate from the Communist Party, has managed to gain an unexpected amount of support – around 10%. With other candidates polling between a margin of error and about 5%, Grudinin’s rating seems unexpected. The head of the company “Lenin’s Sovkhoz” is popular not just with Russia’s pre-baby-boomers, but also with millennials! And if the Kremlin wants to blame somebody for this, they should be kicking themselves for Grudinin’s success. Millennials like the communist candidate because of governmental idealization of the Soviet past.

Young people who never lived in Soviet times seem to experience nostalgia after the days that were depicted in ever popular Soviet movies. Popular Russian bloggers who post something critical on Soviet realities usually get hit back with large number of comments that accuse them of being unpatriotic. “Unpatriotic” is supposed to mean that consumerist delights such as a large variety of cheeses or smartphones are put above the great power ambition. This also resonates with the Soviet notion of the so-called “sausage immigration” when people who were leaving Soviet Union or Russia were seen as chasing economic prosperity as opposed to patriotically sticking it out in the Motherland. Still, millennials primarily associate Soviet era with the notion of economic stability where education and medicine were free and most people were guaranteed a working place after getting a degree – seemingly what Grudinin is offering in his “Fairness. Motherland. People” campaign. Here are a couple of reactions to Soviet Union bashing on social networks:

“it was way more predictable, there was more security. There was a difference between the income of the rich and the poor. There were fewer paupers. Food was of better quality than now. Good and free medical care. Cities and villages were kept cleaner. Basic needs of people were met more systematically”.

“people lived in a superpower. You can moan a lot about the queues in the late 1980s, but it was not always like that in the history of the USSR. Well, there were achievements in science and technology. And there were a lot of them”

“all of you Motherland traitors are the same. You are ready to sell yourself for some tomatoes. Defective people”

Economic anxietyTM  in Russia translates into yearning for the Soviet virtual reality.  And Grudinin seems to embody the idea of “superpower with fresh tomatoes and smartphones” for some millennials – IF they show up to vote. But Putin needn’t worry. Elections scheduled on a “Crimea Re-Unificiation Day” are not going to disappoint him.

Trauma in Common: US Gun Violence and Violence in Armed Conflict