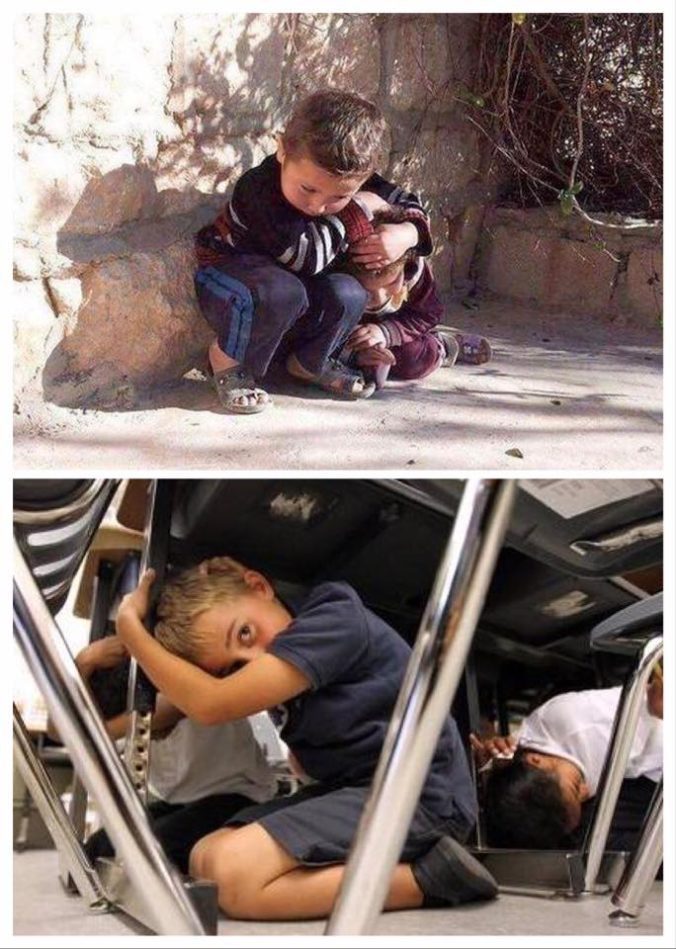 Trauma in Common: US Gun Violence and Violence in Armed Conflict

This is a guest post by Betcy Jose, Assistant Professor of Political Science at University of Colorado-Denver

“This is a really good school, and now it’s like a war zone.” This is how one parent reacted when picking up his son from Marjory Stoneman Douglas High School in Parkland, FL after a shooter murdered 17 students and staff. It is a description often used in the aftermath of mass shootings. At first blush, it seems a remarkable comparison to make, especially given that the United States is not embroiled in anything resembling a traditional armed conflict within its borders. The International Committee for the Red Cross, the international community’s expert on war and war law, states only two types of armed conflicts exist in international law. One is an international armed conflict that includes “all cases of declared war or of any other armed conflict which may arise between two or more of the High Contracting Parties, even if the state of war is not recognized by one of them.” The other is a non-international armed conflict, one that involves, “protracted armed confrontations [reaching a minimal level of intensity]… between governmental armed forces and the forces of one or more [minimally organized] armed groups, or between such groups arising on the territory of a State…” Even with tragically high rates of mass shootings in the United States, the kind of violence it experiences domestically would not legally qualify as a state of war.

But what about from the point of view of the victims of gun violence? Do their experiences, particularly those of victims of mass shootings, resemble in any way the experiences of civilians in legally recognized war zones? Here, the answer may be surprising if we focus on at least two issues related to gun-violence victims and war-affected civilians: the violence and harms they experience and their efforts to protect themselves from those harms and violence.

In some ways, gun violence in the United States does in fact approximate what civilians in war zones experience. First, most of the time, shooters in the United States intentionally target civilians. This is increasingly becoming a pattern in warfare as well. For instance, in Syria, intentional civilian targeting has become so common that Panos Moutmtzis, the United Nations’ regional humanitarian coordinator, lamented, “We are running out of words, to be honest, to describe it.” Second, civilian casualties rates from gun violence in the United States are on par with gun-casualty rates in conflict zones. In fact, NPR reports casualty rates due to gun violence in the United States are actually worse than those in many of the conflicts in the Middle East, including Syria’s, even with conflict-related casualties factored out. Third, similar weapons terrorize U.S. victims and war victims: the AK-47 and the AR-15. These were designed for soldiers to use in combat and are ubiquitous in today’s wars. The New York Times finds that “[t]oday the Kalashnikov [AK-47] and AR-15 variants remain the most commonly seen weapons on modern battlefields; their use is central to almost every war.” Their civilian versions seem also to be the weapons of choice among U.S. mass shooters. Variants of these weapons were used in some of the United States’ deadliest mass shootings: Aurora, Sandy Hook, Orlando, San Bernardino, Las Vegas, and Parkland.

Unsurprisingly, war victims and gun violence victims also share similarities in the harms they experience. The injuries sustained in a mass shooting resemble those of war victims’. According to Dr. Jeff Davidson, who helped treat some of the victims from the 2017 Las Vegas mass shooting, the injured “had wounds [I] doesn’t normally treat. They were bleeding out from high velocity gunshot wounds typically only seen in war zones.” The effects on victims’ mental health are also similar to victims of other types of mass violence. In a study published in September 2017, the Substance Abuse and Mental Health Services Administration determined that, “[m]ass violence [which includes school shootings] can result in a wide range of consequences including anxiety, depression, reduced sense of safety, stress or posttraumatic stress disorder (PTSD), sleep problems, feelings of guilt and shame, and increased risk of smoking and misuse of alcohol and other substances.”

These types of events also impact far more people than those most directly affected, increasing the number of those harmed from their occurrence. The National Center for Posttraumatic Stress Disorder observes that, “the impacts of mass shootings extend far beyond the primary victims to encom­pass the community, whether that is a workplace, neighbor­hood, school, or campus.” And with school shootings occurring more frequently, children have a heightened sense of vulnerability and loss of control, not knowing whether they might be the next victim in much the same way civilians in war feel. As one 15 year old told the Washington Post, “’It makes me feel really concerned. It feels so much more common now… You don’t know where it’s going to happen next. It could happen at our school. There’s no way to tell.’”

Connections also exist between victims of U.S. gun violence, especially violence from mass shootings, and civilians in war in terms of how they respond to this violence. Peace Medie and I have studied civilian self-protection in war and have found various ways in which civilians try to shield themselves from conflict-related harms. These strategies bear striking similarities to how U.S. civilians are trying to self-protect. They have used social media in savvy ways to demand the violence end similarly to how Syrians have powerfully used Twitter for the same purposes. U.S. civilians have also engaged in proactive measures to protect themselves from future mass shootings, relying on their communities rather than their governments, as have civilians in war zones around the world whose governments are unwilling or unable to protect them. NPR discovered that “[s]ince the Columbine massacre in 1999, schools have changed the way they respond to both potential threats and actual attacks. And they’ve done so even without coordinated federal oversight or much in the way of dedicated resources, either for training, safety or broader prevention.”

However, our research on wartime civilian self-protection has found that such strategies have limited effectiveness. More effective efforts to protect civilians, either from war crimes or gun violence, require the kinds of resources and authority that larger entities like governments have at their disposal. But governments need to have the will to employ them. In the case of a war-affected country like Syria, it’s clear the government is uninterested in protecting its civilians, prioritizing its political interests instead. From the perspective of some of the victims of gun violence in the United States, it seems the same could be said of their government. Perhaps by appreciating that its gun violence victims experientially share more with civilians in war than one might expect, the United States will find the motivation to follow the path of comparable peacetime and wealthy governments in safeguarding its civilians’ welfare rather than acting with the disdain of those like Syria’s caught up in war.

Broken IR? It is worse than Walt lets on