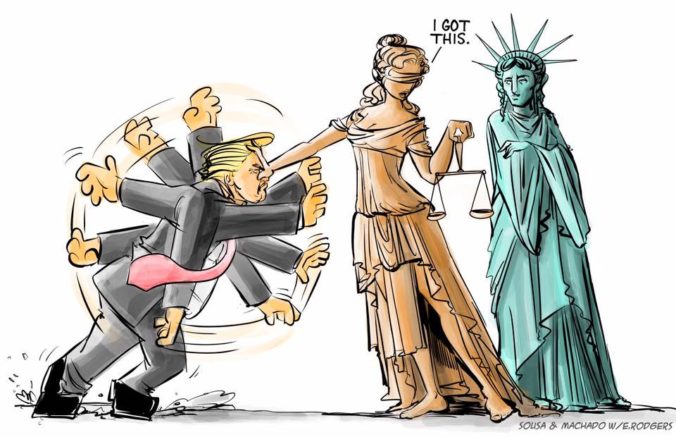 This is a guest post by Lucas Dolan, a PhD Student at American University’s School of International Service. His research deals with the transnational coalition-building of right-wing populist movements. For further information, see his website, or find him on Twitter (@mrldolan).

Steven Levitsky and Daniel Ziblatt (L&Z) have accomplished something impressive. Their new book How Democracies Die (HDD) is a relatively condensed volume that—while clearly written for a popular audience—is also likely to become required reading for scholars interested in authoritarianism and democratic backsliding.  Indeed, my institution’s chapter of the 24 university “Democratic Erosion” consortium assigned the book even before it was released. It is a rare scholarly work that has generated substantial discussion in both the scholarly and policymaking communities immediately upon publication. The book draws from the authors’ extensive research on de-democratization in Latin America and Eastern Europe (as well as some instructive episodes of American history) to identify processes of democratic erosion and derive lessons for resisting such processes. These historical and comparative chapters are then used as benchmarks for evaluating the threat to democracy posed by President Donald Trump. Puzzlingly, the book omits a meaningful discussion of the role of populism in democratic erosion—despite one of the author’s influential work on that topic. In this review, I attempt to reconstruct how deeper engagement with populism might have fit with the book’s core contentions. I conclude that Levitsky’s own mobilization approach to populism lacks cohesion with HDD and that Jan-Werner Müller’s ideational understanding of populism interfaces more naturally with the mechanisms of democratic decline proposed by L&Z.

The book’s central argument can be boiled down to a relatively simple formula: particular types of leaders pose a threat to democracy, and we can identify these leaders prior to their taking power based on four characteristics (pp.23-4): 1) “rejection of (or weak commitment to) democratic rules of the game,” 2) “denial of the legitimacy of political opponents,” 3) “toleration or encouragement of violence,” and 4) “readiness to curtail civil liberties of opponents, including media”.

When leaders bearing these characteristics emerge and seriously contend for office, the parties they are affiliated with or ideologically proximate to often face an existential dilemma: whether to form unlikely coalitions with their traditional ideological opponents to defeat the would-be authoritarians, or to put party and ideology before country and acquiesce to the strongman. When these parties put democracy first and form broad coalitions, authoritarians are almost always defeated, and democracy saved (albeit with some damage inflicted); on the other hand the acquiescence of these parties often puts countries on the path to competitive authoritarianism.

Once in office, would-be authoritarians tend to follow a fairly standard playbook. I use the term “playbook” intentionally, because L&Z use a sports metaphor to flesh out these processes. To consolidate power, would-be authoritarians attempt to capture the referees (by coopting independent institutions such as the media, intelligence agencies, law enforcement, and the judiciary), sideline the opposition (by eliminating competitors through a variety of means), and tilt the playing field (by formally changing laws to consolidate and prolong their hold on power). Importantly, a well-designed constitution is not a sufficient protection against these processes, successfully resisting them requires healthy democratic norms, particularly the norms of mutual toleration and institutional forbearance.

The book’s conceptual reference point of authoritarianism is appropriate, but I found the lack of attention to the intersection of populism and authoritarianism to be a noteworthy omission—particularly as “populism” has occupied such a prominent place as a media buzzword in the context of recent threats to democracy. Nevertheless, L&Z only mention populism three times in the book—each in passing. The first instance refers to an assertion that populist outsiders are the types of candidates who tend to meet the four warning criteria for would-be authoritarians discussed above. The second points to a description of George Wallace midway through the book attributing his political success to a blend of populism and white nationalism.  A third, mention refers to Hugo Chávez’s “populist discourse” and how it scared the Venezuelan opposition into overreacting, assuring its eventual demise. Importantly, these are all offered without an accompanying definition.

This truncated treatment of populism leaves several important questions unanswered: why are populists the type of leaders who tend to display authoritarian red flags? How might a populist mobilization strategy or ideology interact with the authoritarian strategies outlined throughout the book? How are democratic norms (what L&Z call the “guardrails of democracy”) impacted by populism?

Was meager attention to populism an oversight, or an intentional restriction of the book’s scope? In this context, there are two potentially compelling reasons to intentionally forego engagement with populism. First, a book which aspires to a broad, generally educated audience may not be the appropriate venue to delve into a thorny debate surrounding a concept leading scholars acknowledge as “essentially contested.” Second, populism is often conflated with adjacent systems of ideas and practices, including nativism, authoritarianism, and nationalism. Whether or not the book was the appropriate setting for the discussion, thinking about the relationship between populism and democratic erosion is incumbent upon scholars working in this subfield, both to produce better theories of democracy and authoritarianism and to successfully confront a significant contemporary political challenge.

The puzzling nature of populism’s absence in HDD is amplified by the fact that Levitsky has dealt with it extensively in previous research. Most useful here is a 2013 article by Levitsky and James Loxton. This article provides two features lacking in the book: a clear definition of populism, and an examination of the mechanisms by which populism leads to competitive authoritarianism. Drawing on the work of Robert Barr, Levitsky and Loxton identify populism with three characteristics: anti-establishment appeals, the presence of outsider leaders, and attempts at direct, unmediated communion between those leaders and the people they purport to embody.

The mechanisms by which populism can lead to competitive authoritarianism derive directly from the logic of these three characteristics. First, the status of populists as outsiders means that they are more likely to lack the skill and patience to work within regular institutions. They are also likely to hold less respect for and commitment to these institutions on a normative level. Second, because “the core message of populist campaigns is that the established elite is corrupt and exclusionary and that existing regime institutions are therefore not really democratic,” successful populists essentially “earn a mandate to bury the existing political system (Levitsky and Loxton 2013, 111). Third, as outsiders lacking in strong party organizations, populists will end up facing “hostile institutions of horizontal accountability,” typically under the control of the very elites they have spent their campaigns vilifying (ibid).

Attention to these mechanisms is certainly one positive extension of the framework presented in HDD—academic readers interested in this fuller picture are best served by reading the book and 2013 article in tandem. Nevertheless, these mechanisms do not exhaust the possibilities for fruitful consideration of the intersection between populism and authoritarianism. Indeed, Levitsky and Loxton’s explanation of the pathways from populism to competitive authoritarianism is limited in two major ways. First, the definition of populism they employ, which focuses on mobilization strategies and the communicative techniques of outsider leaders, is simply one of several conceptualizations of populism, each of which leads to diverging implications for its connection to authoritarianism. If populists need not be outsiders, then the first mechanism (lack of skill, patience, and commitment to institutions leading to their undermining) would not apply to all populists.

Second, as Levitsky readily admits in a recent paper delivered to Stanford’s “Global Populisms as a Threat to Democracy” conference, the United States and European countries differ fairly dramatically from Latin America with regard to institutional strength, socioeconomic status, and the degree of inclusion offered by populists. Primarily, this makes a difference because exclusionary populists facing robust, consolidated institutions in rich countries may find it harder to generate the popularity to circumvent these institutions through plebiscitary measures. As just one example, Donald Trump cannot hope to match the support of seventy or eighty percent of the population that Latin American populists occasionally attracted; indeed, his approval ratings have been closer to the mirror image of those numbers throughout his entire presidency. We now see that both the particular conception of populism, and the characteristics of the particular political economy being investigated make a difference. So, with two of the mechanisms connecting populism to competitive authoritarianism revealed to be contextual, what is left of the connection?

We can gain some leverage here by an alternative conceptualization of populism less in debt to the peculiarities of Latin American cases. It is useful to consider the HDD framework in light of the ideational conception of populism developed by Jan-Werner Müller. While Müller’s populism contains characteristic speech-acts, ideas, and government strategies, I classify it as ideational because, according to Müller, the wide-ranging, seemingly contradictory patterns of populist behavior can all be traced back to the internal logic of a sparse package of beliefs. Müller sees populism as combining anti-elitism and anti-pluralism. According to him:

Populism is not just any mobilization strategy that appeals to “the people”; it employs a very specific kind of language. Populists do not just criticize elites; they also claim that they and only they represent the true people (2016, 40).

While this dispensation with mobilization strategies would severely hamper the connections between populism and competitive authoritarianism under Levitsky and Loxton’s model, Müller provides the tools to connect these solely through the internal logic of populism.

Müller sees populists in power as engaging in three strategies of governance—these happen to bear a striking resemblance to the sports-inspired strategies outlined in HDD:

While these strategies do not directly overlap, it is fair to say that both categorizations are aimed at the same overarching bundle of practices—L&Z and Müller have merely sorted them into different bins. Significantly, Müller acknowledges that the three strategies he outlines are not unique to populists. What is unique to populists, and what I want to suggest provides the key to understanding the pathway from populism to competitive authoritarianism independent of mobilization strategies, is the of “the people” and “the elite.” Positioning anti-democratic moves in this language, populists are able, as I recently observed in a slightly different context, to employ authoritarian strategies “openly, seemingly with a clear conscience, and without significant political cost.”

The anti-pluralism inherent in Müller’s conception of populism also helps us to understand how populist discourse directly undermines the normative guardrails of mutual toleration and institutional forbearance, which L&Z see as essential in resisting moves toward authoritarianism. One need not be a Schmittian to acknowledge that people will be more willing to tolerate authoritarian behavior when it is couched as a corrective against an enemy that is subverting true democracy on behalf of groups that do not even belong in the polity.

While readers unfamiliar with Levitsky’s early work might assume the lack of engagement with populism to be attributable to insufficient reflection on the topic, the exact opposite proves to be true. Situated theoretically in the mobilization tradition, and regionally in Latin America, Levitsky’s work on populism ill-fits the task of HDD of dealing with democratic erosion in countries with strong parties and institutions. This mismatch provides one explanation for the lack of meaningful engagement with populism in HDD. Instead, Müller’s view of populism as a pars pro toto argument—that only some of the people belong to “the people”—turns out to be essential for understanding this context. Thus, it is an examination of the conditions of possibility set by populist discourse, rather than mobilization strategies, that provides the critical connection between populism and competitive authoritarianism. The substantial contribution of L&Z can be complemented by further research examining this particular avenue in connecting populism and competitive authoritarianism.