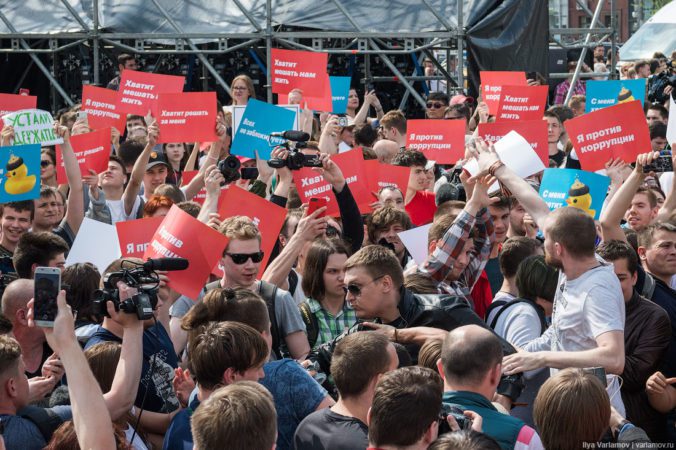 Today is President Putin’s inauguration day and even Avengers couldn’t stop it, as evidenced by the arrested raccoon in the center of Moscow on Saturday during the unsanctioned rally ““He’s No Tsar to Us.” For Russia watchers, the Saturday protests probably created a sense of déjà vu of May 2012 when much larger protests erupted in Moscow and around Russia. They displayed a high degree of social mobilization around the fair elections narrative, but the protesters paid a high price for it: over 30 were criminally charged and 17 were sentenced to several years in prison, some fled the country.

The scale of the protest in May 2012 was so large that a new legislation on rallies was enacted on 9 June 2012. It increased the fines for the violation of public rallies law to up to a million rubles. One of the authors of the rally law – ‘Just Russia’ member Sidyakin – at first stated that the law was supposed to prevent the ‘Ukrainian scenario’ in Russia . Communist Party and Liberal Democratic party members warned President Putin about the ‘orange plague’ and that nobody ‘wants to go back to the 90s’ and the President should not let an ‘orange revolution’ take place in Russia.

Right after that, on 13 July 2012 ‘amendments to the law on non-commercial organizations’ obliged organizations to register as ‘foreign agents’ in case they were involved in ‘political activity’ (even through funding) and received funding from abroad. As one of the defenders of the law stated on prime-time television:

The purpose of the law is to reduce the influence of foreign countries on the policy. Thus, our law is much softer than the one in the US […]. And at the same time if you engage in politics, that means fighting for power, you must inform the Russian citizens. Those who oppose this law, do this for two reasons: the first – or they want to seize power in Russia in the interests of foreign states and against the interests of Russia, and the second – they get Western money and want to steal it

The infamous if existent “State Department cookies” didn’t help: protests died out within a year, partly due to the unusually harsh penalties for the protesters, partly due to the internal squabbles in the protest movement that couldn’t decide on a platform or whether they were comfortable with entering a temporary alliance with nationalist groups. Then, the jingoistic orgasm of Winter Olympic Games and the Crimea annexation got in the way of not loving Putin.

Governmental TV obviously did not report on the Saturday protest – the airtime was taken by reports of the anti-Macron rally in Paris and a Neo-Nazi concert and get together in Kyiv. But the people in Russia came out against the “Putin’s coronation”, corruption and Internet censorship – in a quest to block a rebellious messenger Telegram, that refused to hand over encryption keys, Russian media regulator Roskomnadzor has caused millions of damage to Russian economy by blocking over 20 million IP addresses.

If in 2012 there were clashes between protesters and police, on Saturday the protesters were whipped (!) and beaten up by pro-Kremlin groups and several Cossack regiments, some of them seemingly from Crimea. The protests featured far less participants than in 2012 “march of the millions”: only 1607 people were arrested all over Russia, around half of them in Moscow. Oppositional leader Navalny who called for the protest in the first place was literally carried away from the street into a prison truck.

In case you were wondering, the police let the raccoon go.

Seven Reasons We Use Annotation for Transparent Inquiry (ATI)