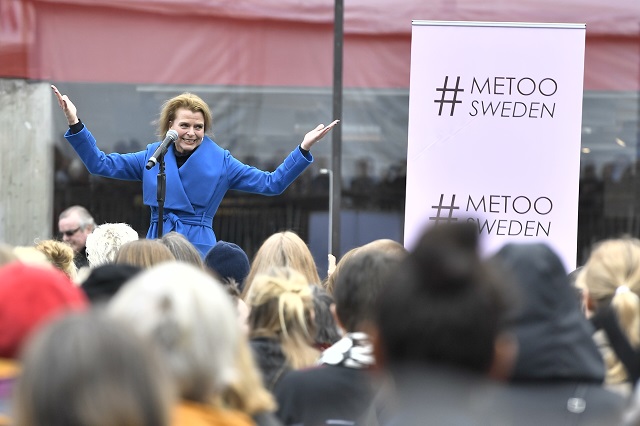 This is the sixth post in the series on #metooacademia

An Australian newspaper described #MeToo in Sweden as “the biggest Swedish women’s movement since women secured the right to vote almost a hundred years ago”. Here I offer my impression on events in Sweden during 2017 and examine: What is distinct about the #MeToo movement from previous movements for women’s rights and/or against gender-based violence? I identify three interrelated themes in the #MeToo debate: from rights to justice; from victims to perpetrators; and from gender equality to feminism as understanding logics of power. Together, these themes offer an opportunity to re-situate feminism as a key tool to expose power. However, I end on how #MeToo has also uncovered an increasingly stronger anti-feminism backlash that we must take very seriously.

From rights to justice

On 22 October 2017, there were #MeToo demonstrations in 14 cities and towns all over Sweden. I participated in Malmö and the one in Stockholm was broadcast live on mainstream TV. Since then, for months, there was almost on a daily basis a new profession-themed hashtag in the news. By December, there had been over 50 different #MeToo-related petitions, including separate ones for lawyers, actresses, singers, journalists, police personnel, military personnel, firemen, construction workers, medical doctors and nurses, academics, comedians, even circus workers.

To start with, #MeToo is distinct because it goes beyond asking for women’s equal rights (to men). Women (and their allies) have asked for this for a very long time but we haven’t seen sufficient actual change within our institutions, workplaces, and in our everyday lives – whether in cultural or economic terms. And we are fed up. And so, the power of speaking up – in sharing experiences, in refusing to be silent, in refusing to be victims – has provided a sense of justice, similarly to Laura Bates’ ‘Everyday Sexism’ project, even though it is not justice in a legal sense.

From victims to perpetrators

Secondly, #MeToo, at least in Sweden, offered a way to move beyond thinking about women as victims: it focused on patriarchal structures, including recognition of the fact that it is predominantly men who are perpetrators of violence more generally. This shift is significant for two reasons: because it includes men and children as victims of patriarchal violence and, as a result, it starts a conversation about masculinities, heteronormativity, and sexuality. In their first televised political debate (held a few weeks after #MeToo erupted), both the Swedish Prime Minister – who calls himself a feminist and has been active in UN Women’s #HeforShe campaign – and the newly elected (male) Leader of the Conservative opposition Party talked about #MeToo as a ‘crisis of masculinity’.

Thus, the shift from victims to perpetrators also highlighted a shift from the individual to structures of patriarchal power more broadly. As Sofia Helin – the actress playing Saga Norén in the globally successful Scandi-noir TV series ‘The Bridge’ and one of the many Swedish actresses involved in various #MeToo related actions – put it: “It is all about ‘structures’ that have to be changed, not about demonizing individuals like Harvey Weinstein and Kevin Spacey […] Creating a monster absolves us of responsibility” (See this).

In other words, this shift away from individuals to structures of power, also means that it is not enough to focus on those who are directly involved as perpetrators. We must also focus on enabling as a practice, both directly and indirectly: enablers of sexism, sexual harassment and patriarchal violence. This shift calls for self-reflection and means that we all have a responsibility to think through how we are complicit in such broader structures of patriarchal violence, and, ultimately, for stopping it.

From gender equality to feminism as understanding logics of power

Black feminism has challenged second-wave/liberal/’white’ feminism’s insistence on ‘gender equality’ for decades by asking ‘what men do you want to be equal to?’; postcolonial feminists have challenged Western feminism for being complicit in global structures of domination; queer theorists and poststructuralist scholars have challenged the binary notion of ‘woman/man’ as the unit for analysis.

However, the third aspect of what makes #MeToo distinct is the wider acknowledgment, beyond feminist circles, that sexual violence – as revealed by the many personal accounts in relation to #MeToo – is only the top of the iceberg. It is a symptom of our patriarchal societies that on so many levels value women less than men. The realization that this is not exceptional violence, but normal in the everyday; that wide-spread gender-based violence is not something that only happens in other countries, but is an ingrained part of our society, meant that Sweden’s self-image as a country doing well on ‘gender equality’ took a hit.

As a global phenomenon, #MeToo demonstrated that feminism is needed to expose the logic of power, of domination, and of silencing much more broadly. This is because it is such a logic – what bell hooks calls “the imperialist white supremacist capitalist patriarchy” – that we must challenge, big and small, internationally and domestically, in policy and in everyday practice.

The MeToo movement in Sweden started calling for more self-reflection on how power is gendered and how gendered norms create and reinforce inequality. In an op-ed in one of Sweden’s biggest daily newspapers, Björn Ulvaeus of ABBA asked himself why he had not realized the scale of the problem before. He thanked the MeToo movement for the fact, as he put it: “we’re taking the first steps into the post patriarchal era and there is no turning back.”

Personally, I think it may be a bit too soon to talk about a post-patriarchal era, not least because there is a huge backlash against feminism worldwide. Anti-feminism movements are mobilising, partly because far-right and populist movements are on the rise globally, but also, I think, because #MeToo made the particular logic of patriarchal power more difficult to ignore.

While on research leave in Sweden in the autumn of 2017, I found myself close to the eye of an anti-feminist shit storm. It all started with an internal conflict over teaching practice in the department where I was based – more specifically about how one member of staff made his grievance with a departmental policy of gender representation in module reading lists public. The conflict and subsequent media attention was framed as a tension between gender mainstreaming policies on the one hand and ‘academic freedom’ on the other. The conflict was quickly picked up by journalist at one of Sweden’s biggest national newspapers, who published a six-part series on the topic of ‘State Feminism’, and ‘successfully’ turned it into a national debate (that also got significant international coverage): on how, supposedly, ‘Gender Studies is taking over Swedish universities’. (For more, see this.)

Feminist and Gender Studies scholars in Sweden found themselves and their expertise under attack, and this coincided with #MeToo. Five current or past prominent Professors and researchers on the Swedish Gender Research Council published a defense: ‘Vi genusforskare hotas till tystnad: Antidemokratiska rörelser attackerar oss systematiskt’, in English: ‘We, gender researchers, are threatened to silence: Anti-democratic movements are attacking us systematically’. They explain how gender research is being attacked by right-wing forces and what they call anti-gender movements on a global scale and how scholars around the world are silenced, quitting for their own personal safety. They conclude with the following (my translation):

“We share the concern that academic freedom is under threat, but it is not Gender Studies that is to blame for this threat. We should pay attention to anti-democratic movements and the harassment of researchers that such movements breed.”

Depressingly, as usual, the comments on social media to this article only prove the authors’ point: with threats, attempts at ridiculing gender research, and a lot of noise about feminism being ideology, thus, not ‘proper’ science.

There is a global war on feminism: Whether through claims about academic freedom, or freedom of speech, or political correctness, noise about how both feminism and anti-racism have ‘gone too far’ is getting increasingly louder. (Surprise, surprise, the journalist with the anti-feminist agenda has recently published a book about how anti-racism in Sweden has ‘gone too far’.)

And so, to conclude, #MeToo and the backlash against feminism worldwide means that feminism can no longer be left to the margins, as an add-on. Instead, feminism is a practice. In different ways, both feminism and anti-racism movements are challenging privilege. This is why the strategies employed to silence anyone who challenges it operates on a similar logic: the logic of the insistence of privilege. This is why we must focus our analytical attention to the insistence on privilege; to how patriarchy is sustainable; and to the violent workings of misogyny and anti-feminism that has declared war on feminism. This is personal, and this is political, and we need allies. Please be a feminist ally.