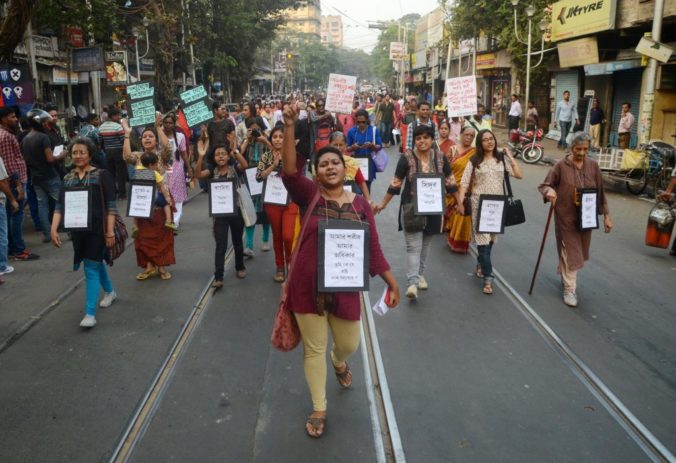 This is a guest post from Swati Parashar, an Associate Professor in Peace and Development at the School of Global Studies, Gothenburg University, Sweden. She tweets @swatipash

This is the fifth post in the series on #metooacademia

#Metoo started as a twitter hashtag, but has no doubt become one of the most effective, visible and also controversial feminist strategies across time and space. While it has been embraced widely for its ‘impact’ factor, it has also revealed the faultlines and dilemmas in feminist strategies and activism. In this short piece, I want to draw attention to the significance of #metoo in the context of postcolonial India and the challenges it has presented to the feminist movement there.

In several Western contexts, #metoo seems to have been more successful and has created its own strong vocabulary and visibility, almost making its appeal exceptional. In several other non-Western contexts, however, #metoo is part of a continuing trend of everyday resistance against gendered violence experienced by women and the impunity enjoyed by perpetrators. #Metoo has emerged out of these local and global campaigns and also contributed to and strengthened them. At the global level, the #metoo campaign must be seen in continuity with the One Billion Rising which is one of the biggest transnational movements addressing violence against women. This movement originated in 2012 and argues that everyday domestic and sexual violence, which is experienced by at least one third of women globally in their lifetime, needs to be addressed as a pressing matter.

Indian women have engaged in feminist politics from different vantage points inspired by the rights and social reform movements and by transnational activist networks. Several feminist networks have taken a regional view of issues, organizing beyond borders and challenging the hegemonic thinking around new and evolving nation states (see for example, the work of Sangat). In recent times, Occupy Wall Street and the Arab Spring, both inspired massive campaigns and public discourses against sexual violence and the culture of victim blaming. Other campaigns such as the 2003 Blank Noise Project against ‘eve-teasing’, the 2009 Pink Chaddi (underwear) movement against moral policing, 2011 SlutWalk protest against victim-blaming, 2011 Why Loiter project on women’s right to public spaces, the 2015 Pinjra Tod (Break the Cage) movement against sexist curfew rules in hostels and the 2017 Bekhauf Azadi (Freedom without Fear) protests also made impact beyond big cities, galvanizing women in small towns and rural areas. #Metoo has to be seen in the context of these protests, marches and movements that have gone beyond the online space to ask real questions of society and the normalization of patriarchal values.

One could argue that #metoo is still restricted to the online space and is yet to make as big an impact as the 2012 Delhi gang rape protests, which galvanized the youth of India (men and women) against male entitlements and patriarchal culture. It was the biggest ever protest against sexual violence that occurred in an ‘everyday’ non-conflict/war setting and asked probing questions of why certain kinds of violent male behavior had been normalized and why women were held responsible for the violence against them. #Metoo, cannot, therefore be exceptionalized and presented as a movement that originated in the American elite circles and adopted as a global movement. #Metoo has emerged precisely because of these many local, national and global initiatives.

The most important impact of all these recent campaigns against sexual violence including #metoo has been to recognize everyday forms of sexual harassment and violence that occurs in relatively peaceful and non-exceptional settings, outside conflict areas. In the context of India, this is both, a challenge to the feminist movement which has in some measures failed to look beyond exceptional forms of sexual violence in conflict or war situations (such as Kashmir or the North East) and a reminder that war and peace exist in a continuum. This was especially evident with the brutal rape and murder of an eight-year-old child in Jammu earlier this year, which occurred in a traditional conflict geography (the Indian state of Jammu and Kashmir) but the guilty were neither the security forces nor militants, but ordinary civilians.

Interestingly, Indian feminists have found it easier to mobilise around issues of dowry/marital violence, female feticide and infanticide, and sexual violence against marginalized and vulnerable women from dalit (“untouchable”), tribal, or minority communities. In contrast, domestic and sexual violence prevalent among the urban dwelling middle and upper classes has rarely been included in activist protests. This violence has been normalized to a large extent highlighting the tensions within feminism, where middle class feminists can talk about violence faced by ‘vulnerable’ women ‘out there’ but not within their own families and social contexts. #Metoo exposes that hypocrisy and anxiety to a large extent raising questions about the everyday, supposedly harmless and largely normalized practices of sexual harassment and molestation that affect women in public spaces and within families, across class, caste and religion.

#Metoo and related campaigns have provided a much needed vocabulary and context to recognize everyday violence and to call out the men who especially champion liberal causes and women’s rights but are otherwise sexual predators whose behavior and actions have been overlooked for far too long. Growing up in a liberalized India of the 90s, I remember how hard it was to speak out against sexual abuse and predators who lurked around in families, in public spaces and at work places. That scenario has changed in the last decade with women not afraid to name and shame their abusers. #Metoo has definitely had a positive impact on the empowerment and sense of freedom women are able to experience. These new feminist movements against everyday harassment and violence also reject the language of policing and protection, demanding freedom and bodily integrity at all times and in all spaces. The most powerful impact of these new age feminist activisms has been a drastic reconsideration of archaic laws and arduous paths to justice. #Metoo has in fact enabled investigations of many ‘respectable’ societal figures and in many cases their guilt has been established.

#Metoo is also a victim of its own success and easily the most controversial feminist strategy to address everyday sexual violence and harassment. Feminists are deeply divided over its methods and especially public naming and shaming campaigns. US based activist, Raya Sarkar’s list on social media containing names of well-known and famous but sexually abusive Indian academics has been decried by the older generation of feminists for not following due process and for what they argue amounts to a form of mob lynching practice that relies on little evidence. On the other hand, Raya Sarkar and other #metoo feminists continue to question due processes which have failed women for far too long. They argue that naming and shaming men in social media spaces has resulted in instant impact, with complaints being brought against them and public pressure on them to explain their behaviour. This is not just an inter-generational feminist conflict but also highlights the anxieties about the social media whose uses and abuses are interlinked.

While the feminist community is divided over this issue, patriarchal dividends have not been lost completely. Several feminists have sided with guilty men or offered feeble defense of their actions, whenever the men have shared their ideologies and identity politics. Left, liberal and ‘progressive’ upper caste and class men have especially benefitted from this divide in the feminist circles; their entitlements remain unquestioned and public memory remains short lived. It is a well-known fact that if women talk about sexual harassment, their life and career choices are in the dock, while the men hardly ever face serious consequences for their actions. Bangladeshi author in exile, Taslima Nasreen brought this to light in her most recent write up on #metoo in the Indian subcontinent.

A roadmap for the future

We should not lose sight of the fact that #metoo in countries like India, remains restricted in the online domain, where only women with one or more kinds of privilege (caste, class, politics, technology) have been able to mobilise on the ground. Calling out men for their misdeeds and violent actions and harassment remains a privilege for the few who work in safe spaces and at safe distances. My research and travels in small towns and rural areas reveal that women have always been subjected to horrendous forms of abuse and harassment and are often forced into silence due to patriarchal norms. Most encouragingly, these non-elite, small town and rural spaces also produce the most remarkable and controversial forms of resistance against sexual violence and harassment. Women in Pink Saris (Gulabi Gang) campaign or right wing women’s vigilante groups are excellent examples of such forms of local resistance.

#Metoo is neither exceptional nor the most effective in some contexts; however its transnational character and its immediate impact on discourse (if not on practice) cannot be denied. #Metoo is also a reminder that without intersectional understanding of gender, any feminist movement will find it difficult to reach the grassroots. We have a task ahead to make this movement genuinely intersectional and inclusive.