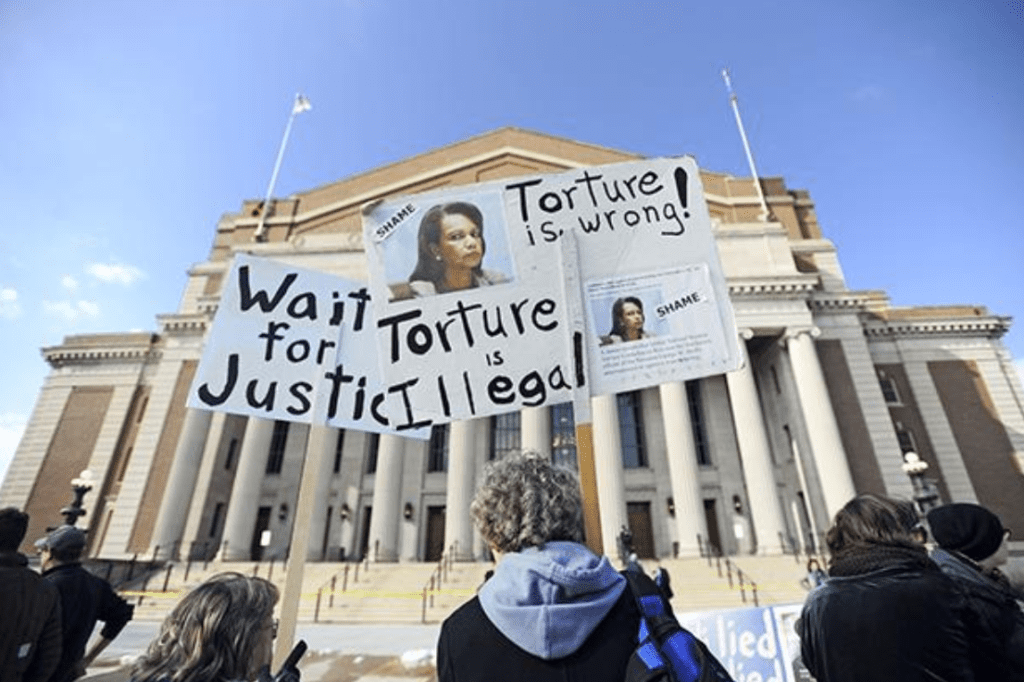 In the run-up to the American Political Science Association Conference in Boston this week, some political scientists are protesting the award of the Hubert Humphrey prize to former National Security Advisor Condoleeza Rice. The award, which includes a cash prize of $1,000, is given each year “in recognition of notable public service by a political scientist.”

Rice earned her PhD in political science from University of Denver and  served in the diplomatic corps and national security establishment under Presidents Carter, Bush Sr. and Bush Jr. – notably, as National Security Advisor during George W. Bush’s first term and Secretary of State during his second. A press release from APSA published on PSNow states that “Dr. Rice’s career exemplifies the contributions that political scientists can make to public as well as academic life.”

The choice of Rice for this award is controversial because of her association with the Bush Administration’s human rights violations in the early war on terror. As National Security Advisor after 9/11,  Rice helped shape and justify Bush-era policies currently under investigation by the International Criminal Court, including the torture program detailed in the Senate Intelligence Committee’s 2012 Detention and Interrogation Program Report.  Human Rights Watch has detailed the Bush-era torture policy in the report Getting Away With Torture and has specifically called for the investigation of Rice for conspiracy to torture.  Rice has previously been the target of protests when invited to speak at universities or receiving awards in other academic fora.

Some APSA members are mobilizing in opposition to the Humphrey Award Committee’s choice of Rice for a Humphrey Award. According to a report on Polisci Rumors at least one panel has been canceled in protest. The following statement has been prepared and disseminated by Professor Thomas Dumm, a political theorist based at Amherst College, and Professor Jodi Dean, a political theorist at Hobart and Smith College.

By giving the 2018 Hubert H. Humphrey Award to Condeleeza Rice the APSA has honored a person who actively participated in creating a rationale for the illegal invasion of Iraq, participated in and defended the creation of policies of rendition and torture against foreign nationals, supported the creation of a concentration camp at Guantanamo Bay, and aided and abetted the deliberate and systematic lies that were told to the American public to encourage their support for the invasion of Iraq, which, from its inception and to this day, has had catastrophic consequences for the world.

The committee members who recommended Rice for the award have responded to our inquiry concerning their reasoning with a statement that argues that while Rice indeed participated in the disastrous foreign policy of the Bush years, her action and that of her fellow members of the administration was taken in the heat of war, with incomplete information, and with urgent responses needed. They also argue that this record is overmatched by her other services to the country, especially noting the reunification of Germany while serving in the first Bush administration and her promotion of policies of development aid under the second. Finally, they point to the person for whom the award is named, and in an act of “what-about-ism” so popular these days, suggest that politics at the highest levels involves inevitable decisions that can, in retrospect, be seen as mistaken.

As political scientists we will long argue about decisions concerning war and peace, power and its limits, and questions concerning the difficult questions of when to act and how. But we are protesting this award because we believe that no one who actively supported and defended policies of deception that led to the death of well over a million people, that created ecological danger still not fully assessed, and that resulted in the torture of other human beings should be given an award.

The committee decided to weigh Rice’s other services against this huge and disastrous failure. But it is not a matter of weight here. Given her record, she should not have been considered for an award.Participation in the governmental administration of torture should be disqualifying. For the APSA to provide cover for officials pursuing such actions violates our professional responsibilities regarding public service.

We urge the APSA to establish an oversight committee that reviews the credentials and records of those who are nominated for public service awards, so as to screen out those who have participated in policies that have had the consequence of the systematic violation of the human rights of others. We also ask that the council rescind this year’s Humphrey Award to Professor Rice, given her record of support for torture and rendition.

The statement will be presented by Professors Dumm and Dean at the APSA Business Meeting. They have asked APSA members to contact Jodi Dean if they would like to add their name to the statement – at jdean@hws.edu.

Members of the Humphrey Award Committee include William Galston of Brookings, who can be reached at wgalston@brookings.edu; Peter Feaver of Duke University (pfeaver@duke.edu); and Barbara Romzek of American University (bromzek@american.edu).