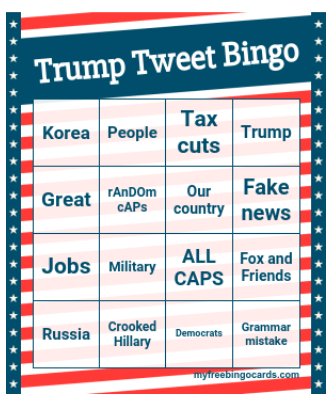 Following the Trump administration is really tiring. And I’m not talking about the last two years — it’s a challenge to survive single weeks of their news cycle. Hell, a Friday afternoon is already taxing. That is why over here in Europe we’re very careful about checking headlines and Twitter Friday night. The outrage at the next fecal storm would keep you up better than a crying baby/ thoughts on the upcoming semester/deadline [insert your trigger]. The White House scandal diapering, however, is extremely predictable. No collusion, Hillary, fake news, Fox and friends, random capitalization and an abundance of grammatical mistakes, which are the typical ingredients making up the diarrhea stream, which flows unabated from the presidential Twitter account. Back in April, Morning Joe even came up with the presidential Twitter bingo but they didn’t do so well. So here is the ultimate Trump tweet bingo card that is based on his last 3000 tweets, which – from his regal, gold-plated porcelain throne – he unceremoniously defecated onto the global public space.

I already noted (and numerous people have made fun of it) that Trump has a very limited vocabulary. The word “tremendous” is probably one of the few polysyllabic words that have been associated with a knee-jerk cringe reflex since about 2015 for many, but it does not even crack the top 10. Number one is by far, of course, “great”. Apart from making America “great” again, there are “great successes”, “great companies”, “great meeting with Putin” and, of course, the “great” president himself. Complicated words don’t have a lot of place in the mass, so other most popular adjectives are fake and big. I am sure Freud would have had a picnic with this selection.

Speaking of Freud, other most popular words in the sample are related to the president himself. “Trump”, “president”, retweeting stuff about @realdonaldtrump – those occupy a significant portion of the manure as well. Could be either subconscious self-branding or unconscious narcissism, although one cannot help but wonder at the presence of a conscience at all.

In a true populist fashion, “people” are everywhere too. When my students did a discourse analysis of the Trump’s inauguration speech, they were amazed how textbook populist it was: corrupt elites in DC, righteous people, power transfer. Trump seemed to have learned some lessons from Steve Bannon, because fake news is the enemy of “the people”, while “Crooked Hillary” and the Democrats get in the way of making America … you know.

And to put a cherry on the pile of this Tweet excrement, there are several linguistic idiosyncrasies that make it so easy to parody the account. Steven Colbert loves reading out the “…” from the tweets that are supposed to be threaded. It also seems like the Donald can’t spell the word “counsel” for the life of him – but spelling in general is not a piece of chocolate cake with two scoops of ice cream. The Twitter account of the Merriam-Webster Dictionary has been expertly throwing shade – just look at the explanation for a “comb over”. But the rules of CapiTAlization are the ones that elude the morning and weekend dumps the most. As we all know, the best way to appear “hinged” is to tweet in all caps about a witch hunt.

I have to go and change my 6-month old now, but I have a feeling the contents of his diaper are much less offensive than the Twitter Feed of the President of the United States

No reading list is perfectly inclusive. Here’s one small step I’ve learned to address that.

What Makes a Good Book Review: Some Editorial Advice