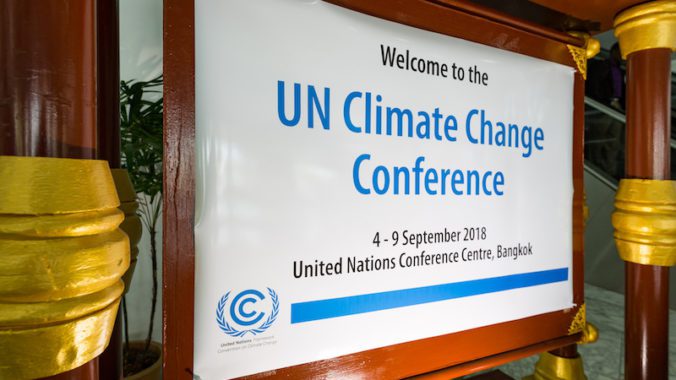 This is a guest post by Nicholas Chan, a lecturer at the School of Arts and Social Sciences, Monash University Malaysia. Follow him on Twitter at @nickdotchan

Three years after the Paris Agreement (PA) was agreed, 2018 has been termed the year where “it’s time to figure out the fine print.” The ‘Paris Agreement Work Programme’, due to be finalized at December’s COP24 climate change conference in Katowice, Poland, requires that a range of guidance and procedures (otherwise known as the ‘rulebook’) be agreed on how the Paris Agreement will be operationalized – especially on how states will report on the content and progress of their national contributions, as well as the financial support provided for developing countries to implement their contributions.

It is an important moment in the life of the PA because the ‘nationally-determined’ character of contributions –that is, each country determining for itself what actions it will take to reduce pollution — means that transparency about these contributions is vital to being able to assess progress towards meeting the goal to limit warming to below 2 degrees Celsius, let alone the aspirational 1.5 degree Celsius one.

The Paris Agreement’s rulebook is not being developed in a vacuum. This may seem like a fairly obvious statement of fact, but one that often seems neglected in thinking about how the processes needed to support the Agreement will be designed. Instead, the task that the climate negotiations face in the three remaining weeks of negotiating time in 2018 – beginning with this week’s negotiating session in Bangkok – is one that is conditioned by the path of the longer history of the process that has developed around the 1992 UN Framework Convention on Climate Change (UNFCCC), and specifically, where a contest between the older top-down and newer bottom-up logics of the intergovernmental climate architecture is being played out. Predicting how these will be resolved is not the purpose of this post, but more modestly, to simply illustrate these dynamics of institutional continuity and change in the UNFCCC architecture.

The Paris Agreement, with its emphasis on national determination ‘in light of national circumstances’, expresses this bottom-up logic. The institutions and processes necessary to operationalize it, however, are being designed and developed in a context where progressively increasing layers of existing institutions and processes have been based on around the ‘Berlin firewall’ of North-South differentiation that generated different obligations and responsibilities between advanced industrialized countries and developing countries.

The decisions due to be agreed at COP24 are principally about how to address this contrast, and how to transition the UNFCCC’s processes and structures from all that has developed since 1992 and the adoption of the Framework Convention on Climate Change, to the new demands of the Paris Agreement: what part of the existing structures are to be retained, what are to be modified, and what are to be discarded altogether and built anew? How can, will, and should a set of structures predicated on North-South differentiation move into a world of universal commitments by all countries?

The Paris Agreement’s adoption was the watershed moment of a critical juncture in the UNFCCC’s architecture that arguably began at the 2011 Durban summit that mandated negotiations on a new agreement; that juncture closes with the elaboration of technical rules on implementing the agreement in Katowice.

Much of the discussion on the transparency procedures of the Paris Agreement has therefore not been solely about ideal types to meet the needs of progressing towards the temperature target, but the question of how to build upon (and transition from) the history of existing differentiated layers of reporting and accountability that the regime has developed over the past three decades: developed countries submit ‘biennial reports’ while developing countries submit ‘biennial update reports’; developed countries are subject to ‘international assessment and review’; developing countries instead go through a process of ‘international consultation and analysis’.

Such processes effectively reproduced themselves over time, generating increasing returns as countries grew more comfortable with them – and also generating a resistance to change that complicates the transition to the newer architectural logic of the Paris Agreement. Orfeo Fioretos wrote in a major introduction to historical institutionalism in IR (2011) that ‘historical inefficiency is central to path dependence’. The Paris Agreement’s rulebook is also likely to be inefficient in this way, through how it aims to improve transparency in order to realize the long-term goal of the Paris Agreement, but in a context of and path dependent resistance to radical changes in the historical reporting framework.

One of the key structural elements being debated in discussions on the transparency framework has therefore been about whether these existing reporting formats should be retained and extended, or superseded with a new structure altogether, and how this will take place. This is a question that is partly about transition costs in moving from one reporting structure to another, but also a political one about developed-developing country differentiation. The latest draft compilation of this transparency framework, prepared prior to the September 2018 Bangkok negotiating meeting, was prefaced by a comment about this structural impasse:

Another transitional question, one of the more visible ones at last year’s COP23 conference, was over the Adaptation Fund (AF). The AF was established to fund climate adaptation projects, with income generated through a levy on carbon credits generated through the Kyoto Protocol’s Clean Development Mechanism (CDM). The low price of these credits over much of the past decade, however, also dried up proceeds to the fund – meaning that it had to be frequently replenished and topped-up through direct contributions from developed countries. With the effective end of the Kyoto Protocol – and with it, the CDM – in 2020, the future of the AF has also been uncertain.=. The Paris Agreement’s enabling decision noted that the AF ‘may’ serve the Agreement; resolving this ‘may’ will be a contentious subject for .

For many developing countries, the prevailing expectation has been that the AF would transition in its existing form to serve the Paris Agreement (to retain the advantages of the AF for developing countries, chiefly in its focus on adaptation and its financing from developed countries); for developed countries, however, further discussion over the governance and (re-)design of the AF would be necessary, including over new potential linkages to carbon markets and other sources of financing. COP23 addressed this uneasily, agreeing that the Adaptation Fund ‘shall’ serve the Agreement, but subject to decisions to be taken in Katowice – in essence, leaving the kind of transition that the AF will undertake still ambiguous.

Other elements of the items to be agreed at COP24 face the same challenge in determining the degree of institutional change that existing processes will face. These include measuring progress in flows of climate finance (and particularly whether developed countries will face increased accountability over obligations to do so); the establishment of new market mechanisms to link different carbon markets (and the future of the Clean Development Mechanism); or on how the negative impacts of mitigation ‘response measures’ (as I have previously worked on), will be recognized and acted upon.

The challenge for COP24 is the question of how the path set forth by 25 years of an increasingly elaborate UNFCCC architecture responds to the new logic that the Paris Agreement sets out. This is also a unique moment in this history. Intergovernmental climate diplomacy has been energetic in proliferating and expanding institutions and processes at key moments (most notably with the Marrakesh Accords in 2001 and the Cancun Agreements in 2010). It has been less concerned with the question of abandoning or letting existing provisions languish, because it has never needed to In order to operationalize the Paris Agreement, however, it faces the task of consolidating one architectural logic into another, and reconciling the tensions of different institutional trajectories, one based on differentiation that is historically embedded into existing processes, and one that sets out a new compromise of national contributions applicable to all.