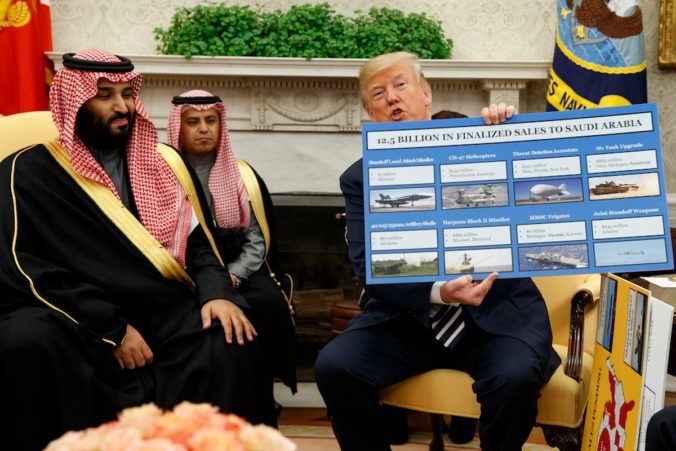 With Arms Sales, “It’s Not Just the Economy, Stupid”

This post comes from Jennifer Spindel, Assistant Professor in the Department of International and Area Studies at the University of Oklahoma and a 2018 participant in Bridging the Gap’s New Era Workshop.

The disappearance and suspected murder of Saudi journalist Jamal Khashoggi this month has led to calls for the US to suspend arms sales to Saudi Arabia. President Trump has ignored these calls, saying “it would not be acceptable to me” to cease arms sales to Saudi Arabia because doing so would hurt the US economy. Arms sales have been a remarkably consistent news topic, from discussions about US arms sales to Saudi Arabia, to the recent grounding of the F-35 fleet, to disputes with Turkey about its arms purchases. This is, on the one hand, unsurprising: the United States sold $55.6 billion in weapons in the 2018 fiscal year, a 33 percent jump from the previous year. Yet the way the Trump administration talks about arms sales in terms of their sheer market and economic value reveals a fundamental misunderstanding about the political stakes of arms sales.

The issues surrounding the F-35 are instructive. From potentially decapitating pilots to recognized hardware issues, the F-35 has become a favorite (if too easy) punching bag in the defense community. Despite issues with the F-35’s capabilities, the plane is still a sought-after weapon – and not just because states have already poured hundreds of millions of dollars into developing and producing it.

The recent fighting between the US and Turkey over Turkey’s F-35 procurement illustrates the political stakes of such deals. Turkish companies produce components for the F-35, and Turkey is supposed to receive at least 20 of the planes. But in December 2017 Turkey purchased the Russian-produced S-400 missile defense system and, in response, the US Senate wanted to prohibit Turkey from acquiring the F-35. There is some concern that the S-400 will be able to collect intelligence about the F-35’s capabilities – and send this information back to Russia.

Yet much of the debate concerns the broader political problems of Turkey buying the S-400. States treat arms transfers as signals of foreign policy alignment: Turkey’s deal with Russia drove home its deteriorating relationship with the US and European States.

This political salience is reflected in statements by US and other policy-makers about the arms sale. US Assistant Secretary of State Weiss Mitchell said, “We can’t be any clearer in saying, both privately and publicly: a decision on S-400s will qualitatively change the US-Turkish relationship in a way that would be very difficult to repair.” Similarly, US Senator James Lankford said, “Turkey has gone a long way from being a NATO ally and an important partner in working against terrorism, to the situation today.” US allies are taking Turkey’s purchase of the Russian S-400 as a symbol of rift between Turkey and the West, with the Australian Strategic Policy Institute calling it “meltdown in relations between Turkey and the US.” Israel has repeatedly expressed its concern about Turkey to the United States, arguing that allowing Turkey to get the F-35 would reward its bad behavior, and that Turkey should no longer be considered a “real” NATO member.

The political effects of the plane on the U.S.–Turkey relationship are independent of its military capabilities and will not change even though the entire F-35 fleet was grounded yesterday. The F-35 is, if nothing else, a status symbol that reflects the strength of political ties between states that have it.

As a signal of alignment, arms sales have wide-ranging consequences. Turkey’s simultaneous pursuit of the F-35 and the S-400 has emboldened other US friends to do the same. What was once unthinkable – US-friendly states actively courting Russian weapon systems – is becoming increasingly common. India, which was recently designated a Major Defense Partner by the United States, also signed a deal to get the S-400 and Saudi Arabia, a US ally, has hinted its interest in getting the S-400 as well.

Arms deals are much more than the transfer of military capability. Nor can they be thought of purely in economic terms. But – in responding to calls to suspend arms transfers to Saudi Arabia for its air campaigns in Yemen or, this week, for its supposed murder of Jamal Khashoggi – Trump has chosen to emphasize the economic consequences of halting arms transfers: “We have jobs, we have a lot of things happening in this country,” he said. “Part of that is what we’re doing with our defense systems and everybody’s wanting them. And frankly I think that that would be a very, very tough pill to swallow for our country.”

Even if Saudi Arabia proved the crucial market to keeping US production lines open, Trump is overlooking the foreign policy signal that the arms sales send. By continuing to supply Saudi Arabia with arms, the US is tacitly endorsing Saudi actions. Congress should, at the very least, suspend arms sales to Saudi Arabia. The State Department approved $1 billion worth of sales to the kingdom in March – delaying the transfer of TOW anti-tank missiles would be one clear way to signal US displeasure with Saudi Arabia. Otherwise, why should Saudi Arabia cooperate with investigations into the disappearance of Khashoggi, or modify its policy in Yemen? In the realm of international politics, talk is cheap; actions matter. Cutting off arms sales or switching suppliers is one way states can signal their dissatisfaction with partners, as Turkey so clearly did by purchasing the S-400. The political stakes of arms sales are high – and it is crucial that policymakers consider that political significance in their arms sales decision calculus along with economic and military considerations.