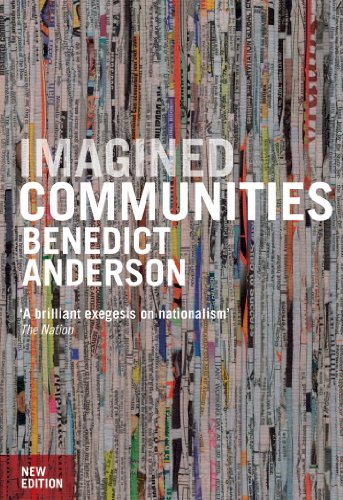 I’ve been watching the current debate over nationalism with some interest. Donald Trump identified himself as a nationalist in the run-up to the mid-term elections. He contrasted this with his foes, for whom he used the problematic term “globalist.” Many saw this as a concerning move, especially paired with Trump’s alarmist rhetoric over a caravan of Central American migrants. It also prompted a response from France’s President Macron, criticizing nationalism as a “betrayal of patriotism.” This got me thinking of my graduate studies, which involved a good amount of reading on nationalism (intended to help conceptualize religious contention). And it made me go back to one of my favorite books of all time, Benedict Anderson’s Imagined Communities.

Imagined Communities is one of those books that is referenced more often than read. I can’t count the number of times I’ve seen an article mention Anderson’s concept of imagined communities in passing without really engaging with it or even seeming to really understand. Anderson argued the nation is a modern concept, an “imagined political community..imagined as both inherently limited and sovereign.” He argued it emerged from cultural and social developments that undermined the hold of the “religious community” and “dynastic realm” over individuals’ identities. So (a quick aside) no, it is not just an “imagined community,” it is a particular type of community with a particular conception of its place in time and space.

While many reference this idea–presented in the first few chapters–few (at least in international relations) grapple with the rest of his book. He discusses how the national idea was transported to different contexts, and the unique form post-colonial nationalism took. And, relevant to the debate over Trump’s embrace of the “nationalist” label, he discusses “official nationalism.”

Anderson argues that the spread of nationalism in the 1800s threatened dominant European dynastic states. The people developed a consciousness as a people, calling on governments to represent them. As as a result, he says, if

Kaiser Wilhelm II cast himself as “No. 1 German,” he implicitly conceded he was one among many of the same kind as himself, that he had a representative function, and therefore could, in principle, be a traitor to his fellow-Germans.

In response, many states developed “official nationalism.” Anderson does not clearly define it, but it is a process in which oligarchs encourage the spread of an exclusive national identity in a state, but one that is closely connected and dependent upon their control of the state. Specifically, it is an “anticipatory strategy adopted by dominant groups which are threatened with marginalization” by growing popular mobilization and consciousness. The official nationalism was therefore a way to “[consolidate] the oligarchy’s domestic position” and at times “took on an aggressive imperialist character.”

So Anderson (who passed away in 2015) would not be surprised at all by Trump’s nationalist rhetoric, or the spread of similar rhetoric around the world. As he said in the book’s introduction (written in the 80s), “the end of the era of nationalism, so long prophesied, is not remotely in sight.” But he would likely have more to say about the specific form it is taking, and the means to counter it.

Trump’s policies and rhetoric are nationalist, but specifically an example of “official nationalism.” This is not (just) the swelling of nationalist sentiment; his rhetoric connects this sentiment to him and his Administration. Moreover, it is a reaction by powerful groups who are feeling threatened. Demographic changes and the spread of cosmopolitan values are shifting the nature of American society and politics; the rise of Trump is a reaction to that. I don’t mean this in a conspiratorial sense; Trump and his supporters would likely echo this argument (with different language).

Anderson was talking about the spread of German consciousness threatening dynastic leaders, which is not completely equivalent to 21st century America. But the spread of a new sense of civic nationalism in the United States–bonded by values, not ethnicity–could fulfill a similar function. And we see similar dynamics in other countries experiencing rising authoritarian nationalism (which would have to be the subject of a different post).

The big question, though, is whether the nationalism underpinning Trump’s politics (and those of other leaders around the world) is inevitably bad. Macron suggests it is, with his contrast between nationalism and patriotism, and many American observers agree. But Anderson seemed to suggest a positive role for nationalism (which others have noted). He highlighted the tensions it produces between society and dynastic regime. And in another chapter, “Patriotism and Racism,” he argues “the dreams of racism actually have their origin in ideologies of class, rather than nation.” I’m honestly not sure how well this travels to the current context (and would love for scholars of nationalism or Anderson to weigh in). But reading Anderson suggests that nationalist sentiment could be reframed in a less nativist light by detaching it from the oligarchies that support “official nationalism.”