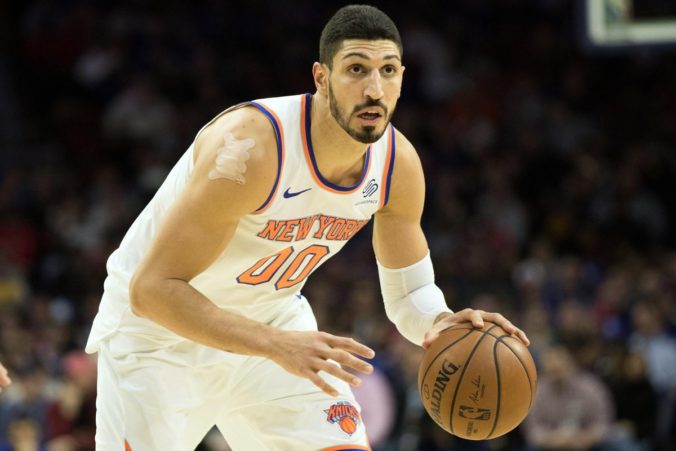 The NY Knicks will be travelling to London in a few weeks for a game against the Washington Wizards.  But center Enes Kanter has announced he won’t be joining them. Kanter, who is Turkish and a frequent critic of Turkey’s authoritarian President Recep Tayyip Erdogan, said he is worried about his safety if he leaves the United States. This may seem surprising, but it shouldn’t; Erdogan has launched a campaign of repression against his critics, both in Turkey and around the world. Kanter has every reason to be concerned.

At first, this decision may seem a bit dramatic, like something out of a spy novel. A basketball star travels to a foreign country and is kidnapped or killed by his repressive home government? Some may believe the Turkish government’s rebuttal that Kanter is really having visa issues (which Kanter denies).  Others, may see this as primarily a political statement, as the New York Times seemed to suggest:

It was a dramatic escalation of his longstanding criticism of Erdogan and a reflection of the way Kanter has been determined to use his fame as an athlete for political activism he considers crucial and dire.

But anyone who’s been following Turkish politics over the past few years  should believe a threat to Kanter’s safety is credible.

Despite initial promises of democratic reform, Erdogan–and his Justice and Development Party (AKP)–has been sliding into authoritarianism for years. This accelerated after the failed coup attempt against him in 2016, after which he launched a “purge” of government employees, journalists and academics he believed may be critical of him. His biggest target has been followers of Fethullah Gulen, a Turkish cleric who is living in exile in the United States (he fled in the 1990s, before the AKP came to power). While they started as allies, Gulen became critical of Erdogan; Erdogan, in return, became obsessed with the political threat Gulen poses and has targeted him and anyone connected to him.

Erdogan’s repression extends beyond Turkey, however. Turkish agents have abducted Gulen followers–accusing them of coup plotting–around the world, from Eastern Europe to Central Asia to sub-Saharan Africa. The Turkish government hasn’t been shy about these operations, boasting about the number of people it has kidnapped.  And this has become intertwined with intrigue surrounding the Trump Administration, as Turkey was working with former National Security Adviser Mike Flynn to secure Gulen’s extradition to Turkey; talks over the extradition have reportedly continued.

Some Gulen followers were likely working against Erdogan. And many in Turkey who are not fans of Erdogan are wary of the Gulen network as well due to its influence over Turkish society. There is some ambivalence in America about the movement too; certain people I’ve talked to suggest the movement may be a secret Islamist organization. But the Gulen network’s global presence is not all political. The network has started many schools, and runs various social and cultural organizations.

I’ll admit I have a personal connection to this. I went to Turkey for the first time through the Rumi Forum, a Gulen-tied interfaith dialogue organization in DC.  I’ve stayed in touch with many people there, as well as members of the Gulen network in Turkey, some of whom have fled or are in prison. So I’m not completely objective here, but regardless of your views on Gulen, this is a major, worldwide, human rights crisis.

That’s why I wasn’t surprised to see Kanter decline to join the Knicks in London. I don’t know that there have been any assassinations of Turkish dissidents (please correct if I’m wrong) but the threat of kidnapping is real.

Where Is Intro to IR When You Need It?