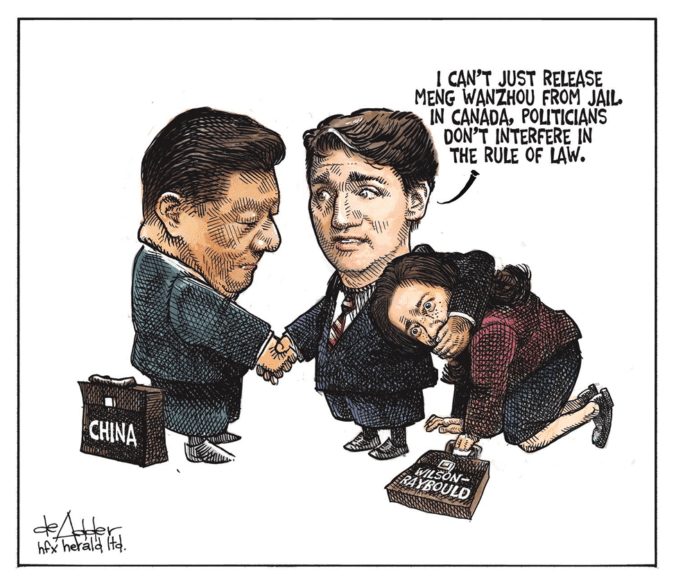 The Politics of Embarrassment: Brand Failure in Canadian Foreign Policy

This is a guest post from Eric Van Rythoven. Eric Van Rythoven recently finished his PhD at Carleton University studying emotion, world politics, and security. His work is published in Security Dialogue and European Journal of International Relations.

The Trudeau government is in crisis.  Yesterday morning Jody Wilson-Raybould, Canada’s former Attorney General recently demoted to Minister of Veterans Affairs, resigned from cabinet.  The resignation comes on the heels of a Globe and Mail report that someone in the Prime Minister’s Office allegedly attempted to influence Wilson-Raybould in her decision to prosecute SNC Lavalin.

A politically connected and influential engineering firm based in Quebec, SNC Lavalin is currently mired in charges of fraud and bribery in relation to its work in Libya.  As recently as Monday night Trudeau expressed “full confidence” in Wilson-Raybould, saying that her continuing presence in cabinet “should speak for itself”.

By itself the allegation of political interference in a criminal prosecution has the potential to be a major domestic scandal.  But this scandal could come with serious international repercussions, especially given Canada’s increasingly troubled relationship with China.  To understand why, we need to step back and think about the role of brand failure in the politics of embarrassment.

How states manage their public image is a longstanding concern of International Relations.  During the Cold War competitive behaviour was commonly attributed to a desire for status and prestige (Jervis, Gilpin).  Following 9/11 interest in ‘public diplomacy’ surged as Western countries sought to rehabilitate their public image in the Middle East through cultural outreach and savvy social media (Gilboa, Snow & Taylor).

This literature overlaps with a broader interest in ‘national branding’ and ‘brand command’ focused on how states manage their public image in an increasingly informationally-dense environment (Potter, Marland).  One could also add to this list the study of international activists using naming and shaming tactics to pressure governments on human rights (Hafner-Burton, Risse, Ropp, and Sikkink).

While these literatures are certainly useful, they can also lead to an overly optimistic view of image management.  What’s missing here are how attempts to craft a positive public image are often marred by struggle, ineptitude, and occasionally failure.  For Irving Goffman it’s precisely these situations when an actor presents conflicting public images that moments of embarrassment begin to emerge.  More than a hypocritical mismatch between words and deeds, or the shame of failing to abide by one’s moral ideals, embarrassment is most evident when an imagined competency is never delivered.

When embarrassment occurs, Goffman recognized that some audiences would be merciful and help the embarrassed party conceal their failures.  Others, however, would exploit cracks in a fractured public image for gain.  The latter would lead to a struggle to regain and maintain composure over self-image—what we can call the ‘politics of embarrassment’.  Embarrassed parties and their allies look repair or minimize the apparent damage; political opponents look to make the embarrassment all the more pronounced.

We can think of the dynamics of embarrassment as a play in three acts: the brand, the break, and the blame.  The ‘brand’ refers to a period of branding repertoires which projects a distinct image of competency.  The ‘break’ captures the period where a previous public image, and the competency it promises, comes into question through moments of off-brand behaviour.  The ‘blame’ comes when a break becomes apparent and actors formulate strategies to respond.  Here is when we can see various composure strategies, such as denial or deflection, are employed by the embarrassed subject and their allies to repair their public image.  By contrast, discrediting strategies, such as sensationalizing, are employed by political opponents and aim to widen and deepen the appearance of a break.  When taken together the brand, the break, and the blame capture how the politics of embarrassment represents a struggle to regain and maintain composure over self-image.

Why does this matter for Canada?  Because the Trudeau government has worked very hard to project a specific brand rooted in respecting the rule of law.  As Canada’s Foreign Affairs Minister Chrystia Freeland argued in her signature June 2017 foreign policy speech: “…our values include an unshakeable commitment to pluralism, human rights and the rule of law.”

Freeland is not alone in this branding exercise.  Trudeau himself regularly cites the rule of law whether in discussing the shared values of the Commonwealth, in speeches at the UN, and even in pipeline decisions.

Last December this messaging took on a new urgency as Canada became involved in a serious diplomatic dispute with China.  At the request of the United States government Canadian authorities arrested Meng Wanzhou, the CFO of Chinese flagship technology company Huawei, while she was traveling through Vancouver.  With the extradition of Wanzhou to the United States pending, the Chinese government has exerted immense diplomatic pressure and retaliated by arbitrarily detaining two Canadians and revising the criminal sentence for a third Canadian to the death penalty.  Throughout the dispute Trudeau has steadfastly maintained that Canada values an independent judiciary and the rule of law.  He even went so far as to criticize China for arbitrarily revising the third Canadian’s criminal sentence to the death penalty.

Yet now the Trudeau government’s rule-of-law brand appears to be suffering a decisive break.  The first signs of the break came when the Canadian Ambassador to China interfered in the Wanzhou case by suggesting Chinese-language media that she had a strong case against extradition.  Citing President Trump’s comments on using Wanzhou’s case as a bargaining chip in ongoing US-China trade negotiations, McCallum made the case that Trump may have unfairly politicized the process.  McCallum’s assessment about Trump may prove true, but it’s not the place for an Ambassador to weigh in on legal disputes unfolding in an independent judiciary.  McCallum was fired to protect the rule-of-law brand.

The break only deepened on news of allegations that someone from the Prime Minister’s Office allegedly attempted to influence Wilson-Raybould in her decision to prosecute SNC Lavalin.  And although the SNC Lavalin and Wanzhou cases are unrelated, they both signal moments of off-brand behaviour where the Trudeau government failed to deliver on its promised commitment to the rule of law.

What this leaves is the question of the blame.  We can already see composure strategies aimed at steadying the government’s image: McCallum’s firing sent a clear signal that he was off message, and Trudeau himself has denied his office directed the Attorney General in any prosecutorial decisions (though the clarity of this denial is in dispute).  These are complemented by a range of discrediting strategies ranging from modest proposals for an ethics investigation to the more sensationalist declarations of a “coverup” by the Trudeau government.  The efficacy of these strategies, including what they reveal and conceal, will determine the severity of the break in the government’s public image and how long it lasts.  Both of these are crucial questions given the looming Federal election in the Fall of 2019.

Finally, perhaps the most important lesson we can take from this moment of crisis is that political branding is never a risk-free proposition.  Off-brand behaviour at home can have effects on foreign relations abroad.  As one columnist recently noted, after the Jody Wilson-Raybould affair “China might be right to wonder if Canadian justice can be bought”.  When the fragile tethers of a public image begin to slip, other states may be right to question who we really are.

What’s a War Crime Gotta Do To Get Some Attention?