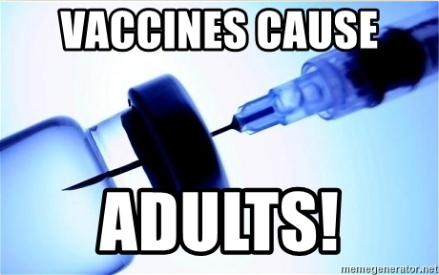 Being at home sick is a perfect moment to reflect on another area of obvious Russian-American collusion – the anti-vaccine movement. Yep, United States, slide over and make some room for your emerging anti-immunization post-Soviet friends. While Russian women might be coming from a different anti-vax background – just like in America it’s mostly women in Russia who make health care decisions for the offspring – they employ the same reasoning and sometimes even American anti-vax videos to justify their positions. Just like the organic kale chewing Karens of Washington, post-Soviet anti-vaxxers are often middle class and have a university degree. My own millennial classmate, a woman with an advanced law degree and several years of law practice foretold the gay (!) downfall of the vaccinated meat-eating Europe.

I am lumping Post-Soviet Russian-speakers together because most of them have been exposed to some degree to the Soviet practices and attitudes towards the shots. In the Soviet Union, immunization had really high rates and many childhood diseases were almost eradicated. In Russia, you also get an additional vaccine against tuberculosis – you can check whether your spouse is a Russian spy by looking at their left upper arm: a small scar from that vaccine is ubiquitous among the children of Soviet healthcare. Even though you could get a deferment for your child’s shots schedule, Soviet herd, in general, had a pretty good immunity. Enter the 90s: the era of post-glasnost and relative democracy allowed quack doctors to thrive on the minds of people suddenly exposed to a wide array of opinions apart from the party line. Some people might still remember Mr Kashpirovsky who “charged” water and healed through the TV screen. That’s when things like Herbalife made a killing in the Russian market – the American one had already been saturated with that baloney. Vaccines held firm, but these days you no longer need to go from door to door to sell stuff, you have social media to spread pro-death attitudes.
Here is a quick example of the post-Soviet anti-vax rhetoric. When the measles outbreak began in Ukraine, a woman from Kyiv posted a selfie on Facebook with a typical measles rash warning her friends of the dangers of the disease: her own daughter who was not old enough to get the vaccine contracted measles and spent weeks in the ICU. The mother turned out to be one of the 7% of the vaccinated folk that didn’t develop immunity despite having been immunized as a kid. Her post went viral among the Russian and Ukrainian speaking crowd and what kind of reaction did she get? Yes, the American kind. How much did big pharma pay you for that post? How stupid are you to recommend vaccines, they ruin the immune system! Is your daughter really in the ICU? Why didn’t you try homeopathic remedies? And, of course, the fan favourite: vaccines cause autism and cancer! Well, of course, the WHO and the health ministries of virtually every country in the world are wrong and a random FB user with no medical degree is right.
Now instead of Kashpirovsky on TV, you have anti-vaccine groups on Facebook and Vkonakte. A self-proclaimed “chief homeopath of the Kazakh ministry of health” (that the ministry itself vehemently denies) and peddler of “spirituality” Marina Targaeva (I told you, Post-Soviet) has over 10k followers in FB and over 10k subscribers on YouTube. I reported her page for misinformation as FB promised to crack down on it, but here she is, happily promoting the fact that vaccines ruin your immune system, and if a child is supposed to die, they will die, because God. To be honest, I am pretty sure God didn’t create underpants, but I have a feeling that unscientific crackpot still wears them…
Some paediatricians in Russia see the measles outbreak as an opportunity to raise public awareness about vaccines and increase falling immunization rates. But so far, kids are getting sick and dying because some parents are worried about “dangerous levels of mercury and lead” – something you might have heard at the Washington anti-vax march. I realize that being a parent is hard and anxiety ridden. Hell, I barely slept in my son’s first year because I was up at night listening to him breathe and worried about SIDS. Anti-vax is, in essence, a projection of anxiety that creates an illusion of control. And while I do have sympathy and understanding for parental concerns, it does not give you an excuse to deny centuries of scientific knowledge and instead put other children and grownups at risk. That’s the thing, vaccinating is not an individual choice, and if not your kids then others are going to pay the price for your anxiety.

I guess anti-vax is one of the few areas where I would like to see much less Russian-American cooperation.

How Not to Get Cited