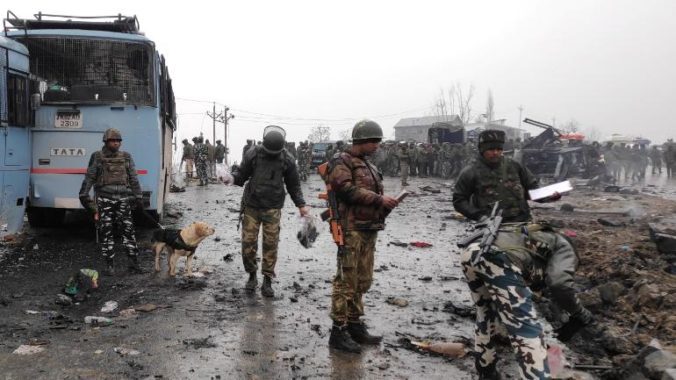 This is a guest post from Adnan Naseemullah from is Senior Lecturer in International Relations, King’s College London, and the author of Development after Statism (Cambridge University Press, 2017).

Indian airstrikes near Balakot inside the Pakistani province of Khyber Pakhtunkhwa on the 26th of February, and Pakistani airstrikes in response, have created anxiety because nuclear conflict lies at the end of a steep escalation ladder. India was retaliating against a Valentine’s Day suicide attack on a convoy of paramilitary forces in Pulwama, in Indian-administered Kashmir, in which 42 were killed.

Jaish-e-Muhammed (JeM), one of several Pakistan-based militant groups operating against the Indian state in Kashmir, claimed responsibility. Indian retaliation targeted a madrassa thought to affiliated to JeM in Pakistan. India’s position is that because groups like JeM are proxies of the Pakistani state, crossborder strikes are justified as a means of preemptive self-defense combatting terrorism.

This dynamic highlights both the uses and hazards of proxies as a tool of crossborder coercive statecraft. It follows a long and ignominious tradition of the use of proxies to weaken strategic competitors that has recent roots in Cold War competition, and has been used by both India and Pakistan. I argue that Pakistan’s use of proxies is becoming increasingly counterproductive as a tool for enhancing its own security by diminishing its neighbor’s, even as recent Indian policies toward Kashmir have created an environment hospitable for these proxies.

Proxy Conflict and the International System

The deployment of proxies was a common tool of pre-modern statecraft, using pirates or bandits to spread one’s authority and undermine opponents. The principle of sovereignty established an international norm against states intervening in the internal affairs of other states, including providing support for rebels. Yet this norm that has been frequently violated, such as with British sponsorship of the Arab revolt against the Ottoman Empire during World War I, or Nazi and Soviet involvement in the Spanish Civil War.

Proxy conflicts were particularly rife during the Cold War, as a means for the Soviet Union and the United States to compete while avoiding direct conflict. Soviet support behind communist and nationalist movements in Southeast Asia, from the Viet Minh and Viet Cong to the Khmer Rouge and Pathet Lao, undermined French colonial rule and US military efforts to prop up anticommunist regimes, while visiting horrific cruelty on civilian populations. In the 1980s, the US sponsorship of right-wing contras against the socialist Sandinista regime in Nicaragua was associated with widespread human rights abuses.

In South Asia, the use of proxies has been frequent and diverse. Indian intelligence armed and supplied a proxy rebel force called the mukti bahini to strike Pakistani military and government targets in East Pakistan, prior to the Pakistani military’s brutal repression there, India’s military intervention and Bangladesh’s independence. In the mid-1980s, India covertly provided arms, training and monetary support to the Tamil Tigers in order to contain separatism in India.

The most dramatic proxy conflict in South Asia followed the Soviet invasion in Afghanistan. The US and its allies funded and armed mujahidin militias, channeled and organized through Pakistani intelligence, to attack the communist government and Soviet military. Pakistan’s own proxies in Kashmir grew directly out of this operation: the largest Kashmiri militant group, Lashkar-e-Taiba (LeT), arose from the Markaz Dawa wal Irshad operating against Soviet forces in Kunar, Afghanistan in the 1980s.

The logic of the use of proxy armed actors is the inverse of balancing: instead of augmenting a state’s own security in relation to a competitor by mobilizing resources internally or seeking alliances, a state can instead weaken that competitor’s security by sponsoring its enemies internally. This is useful in contexts of structurally unequal power distribution, as in South Asia. While such activities straightforwardly violate norms of sovereignty, sponsoring states justify them with recourse to alternative norms, with varying levels of cynicism: that of self-determination, or resisting repression, or protecting dignity and human rights.

The use of proxies can be hazardous, however. First, terrorism has, in the post 9/11 era, become a taboo, and proxy groups using terrorist tactics, and sponsoring states, have been open to international sanction. Most contemporary proxies are those of great powers using irregular military tactics rather than terrorism in contexts of civil conflict, as with American-sponsored militias in Syria or Russia’s “little green men” in Ukraine. Kashmiri-based groups have conducted horrifying terrorist attacks on civilian targets, such as with the 2008 Mumbai strikes, that have rightly elicited international condemnation and attracted stigma. Thus this form of power projection can leads to increasing international audience costs and consequences.

Second, the use of proxies involves significant principal-agent problems; armed groups have their own agendas and can mobilize their own resources, often through organized crime. Sponsoring states have little choice but to continue their support despite these differing goals, or else lose a tool of coercion, or worse, face violent backlash. After all, Osama bin Laden was an American-funded proxy in Afghanistan before he became America’s greatest enemy.

The Rising Costs of Pakistan’s Proxies

Pakistan’s continued use of proxies in Kashmir is becoming increasingly costly, relative to uncertain benefits, for its own security and power projection for four reasons.

First, proxies are, once deployed, hard to direct, modulate or control; Kashmiri militant groups compete with one another in an ecosystem of violence, responding to incentives and opportunities for action that might not follow the interests of the Pakistani state. The Pulwama attack, for instance, occurred only days before a visit to Islamabad by the Crown Prince of Saudi Arabia, and a subsequent visit to Delhi. Pakistan, aiming to secure a large loan to address its macroeconomic difficulties, could have done without the embarrassment.

Second, proxies are most effective when deniability is at all plausible. Despite protestations and demands for proof, Pakistan’s associations with these groups, going back to the 1990s, is evident; JeM’s headquarters are in Bahawalpur, deep in Pakistan. As particular groups claim credit for attacks as a means of bolstering their strength, there is little difficulty in connecting Pakistan to acts of terrorism in India, either in Kashmir or further afield.

Third, shifts in broader Indian strategy have made the use of proxies more dangerous. As Srinath Raghavan notes, previous Indian governments sought to contain terrorism in Kashmir, avoiding escalation by denying terrorist groups capacity to operate counterinsurgent measures, while otherwise exercising strategic restraint and international pressure. Modi, however, is keen on not managing and defusing but rather exploiting the Kashmir issue, as a means of burnishing his reputation as a “strongman”. As the strikes near Balakot show, the Modi government are committed to expanding the zone of retaliation to Pakistani territory proper. The abandonment of strategic restraint complicates straightforward strategies of Indian containment by proxy warfare.

Fourth, India connects Pakistan’s use of proxies in Kashmir with continuing Pakistani relationships with the Taliban, raising suspicions that Pakistan is destabilizing Afghanistan for ideological purposes. While it is true that Pakistan sponsored the creation of both the Kashmiri militant groups and the Taliban in the 1990s, the latter are presently formidable governance actors operating a shadow state and controlling nearly half of Afghanistan, capable of operating independently of Pakistan. India’s overall strategy of turning Pakistan into an international pariah through the Kashmir-Afghanistan linkage is unlikely to succeed given the strength of Pakistan’s relationships with China and increasingly Russia. But India’s argument locating Pakistan as the central problem in Afghanistan chimes with some US policymakers, and can endanger the current peace talks necessary to forestall a bloody and destructive civil war following American withdrawal.

In response to Pulwama and but following the 2011 National Action Plan against terrorism, Pakistani authorities have cracked down on militant groups, confiscating assets and arresting 44 suspected militants, including relatives of JeM’s founder. There are powerful voices within government that argue that Pakistan cannot afford multilateral sanctions and exclusion from the financial system.

But these efforts might fail, for two reasons. First, arrests and detentions of high-level militant actors in the past have not been sustained, with deep state actors hedging between containing and preserving proxies. The judiciary has been reluctant to prosecute militants for fear of retaliation. Second, the domestic infrastructure of these organizations is deeply integrated into Pakistani society. JeM runs schools and hospitals in poverty-stricken southern Punjab, and thus enjoys significant popularity there. Sustained actions risks violent backlash against the state.

Unfortunately, even if Pakistan continues to take significant, permanent steps in demobilizing its proxies and dismantling its infrastructure, violence in Kashmir is likely to continue. Increasing conflict in Kashmir in the last five years has been spurred by the use of blunt coercion – including the use of shotgun pellets that has caused widespread blindness – against protestors demanding autonomy and recognition, leading to widespread human rights abuses. The state government has been suspended since June 2018. Adil Ahmad Dar, the suicide attacker in Pulwama, joined the militancy following a series of injuries and humiliations on the part of security forces. Former BJP Foreign Minister Yashwant Sinha has said that due to the brutal actions of the Modi government, “India has lost the people of the valley,” and is only holding it due to military force. The ongoing political and humanitarian crisis in Kashmir has created an environment particularly hospitable for militant organizations, whether they continue to be supported by Pakistan or not.

Proxies are a depressingly common tool of coercive power, and outrage against their use invites charges of hypocrisy. But at the same time, it is a tool of chaos, with inherently uncertain benefits but specific costs. Pakistan’s use of proxies has both a history and a logic, but it might not survive objective scrutiny in 2019.

Social Media/Engagement: Why Do It?