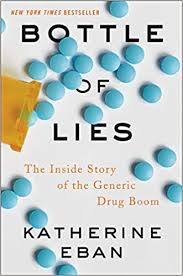 Are Generic Drugs Safe? Big Claims in a New Book

I was in the car when the Dallas radio station KERA came on with an interview with the journalist Katherine Eban, author of the new book Bottle of Lies, in which she claims that the generic pharmaceutical industry faces widespread problems of quality.

For me, this was particularly concerning since Indian drug makers provide more than 80% of the AIDS treatment drugs that keep millions alive around the world. If these drugs are not safe, then surely this should be showing up in increased mortality of people with HIV on generic antiretroviral (ARV) drugs. If true, the claims of the author could be really worrisome.

In researching my last book, I’d heard that years ago the Indian company Ranbaxy had problems and was suspended from contracts from the US government. But Eban alleges that the problems go much deeper than Ranbaxy whose problems take up no more than 1/3 of the book.

She describes the problem in an op-ed for the New York Times as a “quality crisis,” a consequence of companies cutting corners on cleanliness and safety at factories, faked data on the quality /efficacy of drugs, and lax enforcement by the FDA. This op-ed focuses on the dangers to Americans of imported generic drugs, and she counsels all sorts of measures to force drug makers to reveal the country of origin of drugs, as if the quality problems from Indian drug makers are so widespread that Americans ought to shy away from them.

The book actually goes further. In an extract in Time, she argues that generic drug companies dump even lower quality drugs in African markets:

But many of the generic drug companies that Americans and Africans alike depend on, which I spent a decade investigating, hold a dark secret: they routinely adjust their manufacturing standards depending on the country buying their drugs, a practice that could endanger not just those who take the lower-quality medicine but the population at large….

I decided to tweet about the book after listening to and reading interviews, extracts, reviews, and the author’s opinion pieces. I’ve also had a Twitter exchange with the author. I have the book but haven’t read all of it (it’s about 400 pages), but I think I have a sense of the author’s claims. In the thread of Tweets, I asked a number of public health experts their sense of the seriousness of the charges.

Matt Kavanagh, a professor at Georgetown University and Director of the Policy & Governance Initiative at the O’Neill Institute, had a similar reaction to me. He wondered whether this argument was repeating talking points from branded pharmaceutical companies. He hadn’t seen or heard of widespread problems in the AIDS drug market. Like me, he hadn’t yet read the whole book but did read some of the op-eds and interviews Eban wrote.

For years, branded pharmaceutical companies have been claiming that generic drugs were not safe and inferior to their products. Generics are often conflated with counterfeit or fake drugs made by disreputable actors. One especially over-the-top ad from Pfizer featured someone taking a counterfeit drug and then choking up a rat (you can see the ad here, which was also shown in the AIDS documentary Fire in the Blood).

So, when I heard the story about Eban’s book, it seemed to echo some of the branded industry criticism of generics from years ago.

To be fair, Eban is a former Rhodes Scholar and is a legitimate journalist having published extensively for outlets such as Self and Fortune magazines. The book is based on 240 interviews and she was very open to engagement on Twitter.

Thank you for thoughtful thread @busbyj2. #BottleofLies not industry hit job. Rather a decade-long reporting effort that I followed where it led. You can read more about my reporting journey here: https://t.co/YM9GloSoSd

Her book reported no direct funding from branded pharma companies, with funding sources reported as HarperCollins and grants from the Carnegie Corporation, the Alfred P. Sloan Foundation, the McGraw Center for Business Journalism at Craig Newmark Graduate School of Journalism, and the George Polk Foundation.

I still worry that pharma companies could indirectly have supported the work through the various foundations, and I would want that to be disclosed if that is the case. My last book AIDS Drugs for All, for example, with Ethan Kapstein was supported by the Merck Foundation.

Over email, I also asked another expert on the pharma sector, the LSE’s Ken Shadlen. He hadn’t yet read the book but had read the Times opinion piece. Like Kavanagh, he hadn’t heard of widespread quality problems but occasional ones. With his permission, I include some extracts from his email:

But that doesn’t mean that Africa is flooded with crap drugs from India. In the first regard differences in quality do not always map on to differences in efficacy, and for AIDS medications that go through global purchasers (PEPFAR, Global Fund procurement, etc), these are going to be the products from the higher quality plants. That said, if the author has evidence to the contrary, we should take it seriously.

And for the US, it seems undeniable that the FDA does not have enough local inspectors to really know what’s going on in India (though again that’s not new; there was a series of great articles on this in the NYT, by Gardiner Harris if not mistaken, about 10 years ago).

As Shadlen noted in his email, Gardiner Harris wrote extensively about the safety gap in generic drugs in 2008 for the Times. In an article called “The Safety Gap,” the focus was mostly on China, though India did feature:

If not for the low prices from Chinese and Indian producers, millions of people around the world would likely go untreated. And in the United States, buying generic drugs produced abroad is one way to tamp down the exploding health care costs confronting companies and individuals. But there is a hazard: without proper regulation, some of those drugs could be either ineffective or dangerous.

So, is there a quality crisis in Indian generics? Eban seems to think there is. She reports on an FDA inspector Peter Baker who beginning in 2012 carried out two years of inspections in Indian pharmaceutical plants and found:

She said that in response to these problems that the FDA set in motion a pilot inspection program of unannounced inspections which was successful but discontinued in 2015.

Under the pilot program, the rate of inspections resulting in the F.D.A.’s most serious finding, “official action indicated,” increased by almost 60 percent, according to my own analysis of F.D.A. records.

So, is this a live and widespread concern in 2019? I asked around to folks in the global health community to find out.

I heard from Amanda Glassman from the Center for Global Development and Jen Kates from the Kaiser Family Foundation who like Kavanagh and Shadlen hadn’t heard of widespread problems in the ARV drug market but suggested the issue was worthy of further discussion.

Like others, the prominent intellectual property analyst and founder of the Medicines Patent Pool, Ellen ‘t Hoen, was not sure if this was new news:

Tom Bollyky from the Council on Foreign Relations weighed in and flagged a thread from former Food and Drug Administration (FDA) commissioner (2017-2019) Scott Gottlieb who suggested that this might be old news about a problem that has been addressed:

Gottlieb in his thread goes on to say that FDA hired more than 1,000 inspectors, with particular emphasis on China and India, and that increased warning letters is a sign of better oversight and regulation rather than failure.

Inspections are now paid for by user fees and continue even when the US government is shut down. The regulatory process and Office of Pharmaceutical Quality have both been modernized, with particular emphasis on quality of the ingredients that go in to drugs, so-called active pharmaceutical ingredients (APIs).

His message was basically nothing to worry about here, occasional issues yes but general problems in quality no. He tweeted a story from Bloomberg that spoke about this modernization process but also seemed to show declining numbers of inspections during the Trump administration.

Dinesh Thakur, the Ranbaxy whistleblower featured in the book (and also quoted in the Bloomberg story), also weighed in on my thread and suggested that Ranbaxy was not an isolated case.

The journalist Laurie Garrett (formerly of the Council on Foreign Relations) noted that the distinctions between branded and generic companies are less clear than they once were because of acquisitions and changes in industry practice. She implied that there are other folks as concerned in India as Thakur:

Jamie Love, the prominent advocate for generics from Knowledge Ecology International, for his part said that generics are essential for addressing the AIDS crisis, capturing the sentiment of the wider AIDS advocacy community:

Like others, he said it was always possible to find examples of poor practices by both branded and generic companies:

So where does that leave us? Gottlieb stepped down from his position at the FDA in April 2019. (And since his resignation, Gottlieb has gotten some flak from Elizabeth Warren for joining Pfizer’s board three months after his resignation.)

Like a lot of the Trump administration, the FDA is currently being run by an acting official, Norman Sharpless, previously head of the National Cancer Institute. While that might leave us worried, at least the agency’s budget has gone up.

So, I’m left with this concern that it could be irresponsible to claim that there are widespread problems in generic drug quality, unless the evidence is clear. On the other hand, Eban can claim, you have no right to pass judgment until you read the full 400 pages. She and Kavanagh had a back and forth along these lines. My feeling is that I’ve read enough of the book and about it to know the main claims.

My sense is that if these claims were true, particularly in the HIV/AIDS community that I reached out to, we would have heard about it because a lot of people would have died (because of the poor quality of the drugs). That might mean that AIDS drugs are better than other generics, but I’m worried enough in the nature of these claims that I’m prepared to write this blog post, even before I’ve finished the book.

*I will write a follow up when I finish it.

US should support environmental peacebuilding and humanitarian efforts for Palestinians