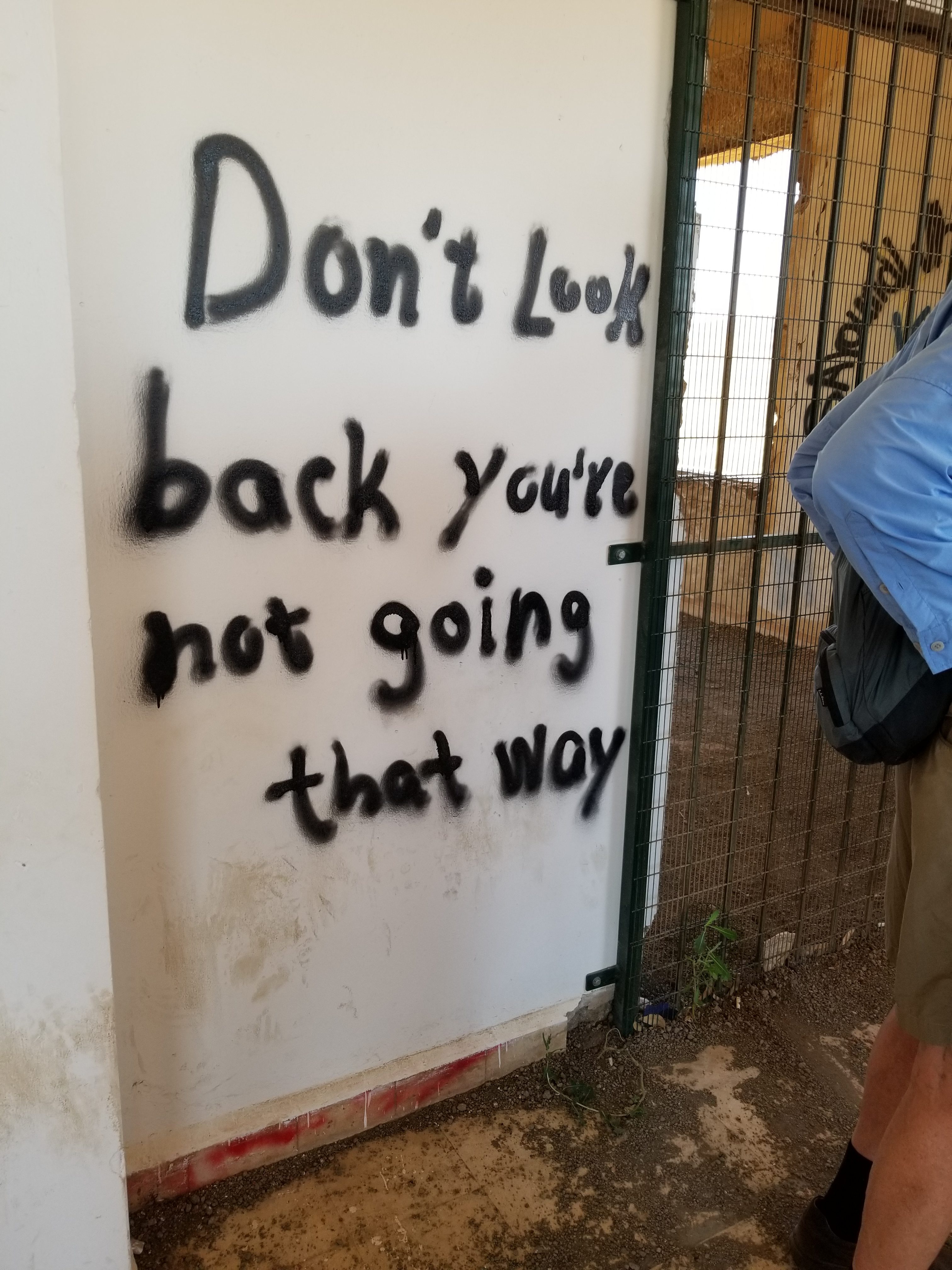 I just came back from eight days in Israel and Palestine, as I participated in a program, Academic Exchange, that has already taken something like 600 scholars (mostly IR but also other political scientists, lawyers [including my brother-in-law], and some economists) to learn more about the place, the conflict and the politics. The experience was pretty intense, so I blogged my daily experiences at saideman.blogspot.com starting with this one (go to my blog for pics since blogspot is cludgy for pics but wordpress–the system here–is far worse). I am blogging here to write about the larger issues–what was the purpose of this trip, what are the take home lessons, and what can we make of this very problematic place.

First, was this a carefully orchestrated information operations campaign (propaganda) to cause us, a group of 25 or scholars mostly from the US with a random Canadian (me) and European along for the ride, to become tools of Israel in spreading the, um, gospel about Israel being right and the Palestinians being wrong? This was the subtext for every question I got from friends about who was funding this trip, especially after we realized we were riding five separate helicopters to the Golan Heights. Yes, there was a lot of money involved, and the AE website mentions private foundations. I have no idea who these private funders are, but I went anyway because a lot of people (including my dissertation supervisor) went and reported back that they were not indoctrinated. While the speakers did not represent the entire array of Israeli or Palestinian public opinion (we didn’t hear from Ultra-Orthodox Jews, for instance), we heard a significant amount of disagreeing perspectives even before we went to Ramallah. One of our shepherds on this trip definitely went off any pro-Israeli script during our day near Gaza when he used the word escape early in the day and then prison later on in the day. That is definitely not Israeli government messaging. The quality of the speakers was almost uniformly excellent, although some preferred to dodge difficult questions. The settler we met was perhaps one of the best representatives for this group of actors–however, her mask fell off several times, revealing truly awful stances, which again helped to reassure us that we were not being played that much.

So, perhaps the organizers are really what they say they are–believers in the old Liberal idea that if you give people enough information, they will reach better, more informed decisions about stuff. Perhaps there was one agenda that was at play here–opposition to BDS. The effort to Boycott, Divest from, and Sanction Israel is popular on college campuses, so we might actually be a useful tool for countering BDS efforts, and the fact that our tour ended with a meeting of scholars from Hebrew University is suggestive. Personally, I think people have a right to advocate for BDS, but I think boycotting Israeli academics and their institutions is misguided. Anyhow, overall, I was very attuned to the possibility that we were getting gamed, and I am pretty sure we were not.

Second, there were a lot of things I learned along the way. Some reinforced existing beliefs (that fundamentalists fundamentally suck), others challenged what I had believed (how do I fit in the Jewish community–I will explain that more at my blog in the next few days), and some was just new. The big question is, of course, what hope is there for peace and a lasting settlement? It would be harsh to say there ain’t none, but … there ain’t none. Why not?

What else did we learn? One of the topics that kept coming up was Iran. The Israelis, with some justification, see Iran as surrounding Israel with proxies in Lebanon, Syria, and Gaza. The Israelis worry about Jordan. One that thing that confused me is why Israelis were not so satisfied with their own ability to use nuclear weapons to deter any future Iranian weapons. The answer mostly is not about Iranian insanity, but about Hezbollah. That is, Hezbollah apparently has many, many more missiles than it did last time, and these are much, much bigger, but, unlike Hamas, these don’t rain down on a regular basis. They haven’t been used in over a decade. I guess that the Israelis may have made it clear to Iran that if their proxy causes great damage to Israel, then Israel will cause great damage to Iran. But that deterrence gets more complicated if Iran can nuke Israel–that it might foster a stability/instability paradox where deterrence at the strategic level prevents Israel from responding to a Hezbollah strike. I get that, but the Iranians would have be very comfortable that the Israelis would be restrained if Hezbollah does vast damage to Israel.

I asked many questions about Israeli civil-military relations. Some downplayed how much it hurts the Israeli Defence Force to do occupation duty, but some were a bit clearer about that. We heard that Ultra Orthodox who do join the military are prone to be less disciplined and more violent. Most surprising is how little training the units get before they deploy to work in the West Bank–three days. I didn’t get any sense of the role of the Knesset (the legislature), but I did get more info than expected of the courts. The Supreme Court actually intervened to stop a battle since the Israelis were accused of war crimes, but it could not be adjudicated immediately since it was the Sabbath. I would need to go back and do extensive interviews to get any clear sense of how Israel’s civil-military dynamics really work.

I also learned why Israelis have so much contempt for Obama. They tend to see a need to react quickly and harshly when they are attacked, so they were most frustrated when Obama did not. I suggested that the US faced a different situation as a global power and can’t simply thwack back every time it gets nicked. Also, it is not clear that Israel’s tit for tat with its opponents has really gotten Israel anywhere. Indeed, there was much satisfaction with the tactical and the short-term, when the strategic and the long-term are not that terrific.

In our day with Palestinian officials (AE has a deal with the Palestinians that the Palestinians get to choose who AE trips meet with in Ramallah), we met four different officials. They had similar but not identical messages. Some were more critical of Iran and of the Arab countries, others less so. Most still favored a two-state solution, but at least one was open to a single state where everyone has equal rights. This post is getting long so see my blog for my take on the Ramallah day.

Of course, folks like to think that they are unique, but we all brought comparative lenses to the party. I used to do a lot of work on ethnic conflict, so I saw much that seemed familiar to me. The Palestinians used “apartheid” early and often. As one of the Africanists in our group noted, there are problems with this analogy, but it makes sense for them to use it. An older southerner in our group kept comparing the situation to the American south in the 1950s and 1960s. I could see that because there was a whole lot of “separate but equal” references along the way. A key theme addressed by many speakers was whether being a Jewish state and a democratic state were in conflict. At least one argued that even in the best of times they are, and that is ok, as dynamic tension is cool and productive. Easy to say if one is in the majority, of course.

Before I came to Israel, I had thought that this contradiction was heading to a breaking point. Maybe I have too much confirmation bias, as we heard a lot of justifications and explanations for why this tension was ok, I still think that Israel is already in a problematic situation and it is only going to get worse as the settlers and Ultra-Orthodox produce more and more children. The demographic time bomb that may destroy Israel’s democracy may not be the fertility of the Palestinians.

Will Republican voters punish Trump for a trade war with China? It depends.