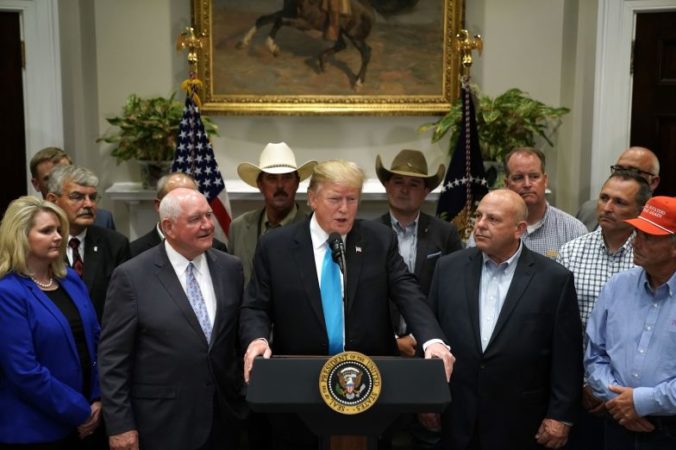 Will Republican voters punish Trump for a trade war with China? It depends.

This is a guest post from Shana Gadarian and Dan McDowell, both Associate Professors at the Maxwell School at Syracuse University.

Earlier this month, after Chinese authorities reportedly backtracked on a set of economic reform promises as part of ongoing trade discussions, President Trump announced that existing tariffs on $200 billion of Chinese goods would increase from 10% to 25%. China responded with new tariff hikes of its own on American products.

The costs of the escalating trade war are most acute in rural areas where Trump has enjoyed strong political support. While it is possible that economic pain from the dispute will erode the president’s popularity among his base, our research suggests that Republican support for the trade war depends less on how much pain the US endures and more on how much it hurts China.

The costs of the trade war

In the last year, the trade war brought substantial losses to American farmers and manufacturers, groups that largely supported the president in 2016. Exports of products targeted by retaliatory Chinese tariffs like soybeans and pork are down by more than a third and prices for commodities like soybeans are at their lowest in a decade. Now, with the looming threat of future tariffs of 25% on consumer goods such as footwear, toys, and clothing, American consumers are beginning to pay higher prices.

How is the broader American public thinking about trade sanctions like the ones the US is imposing on China? Overall support for the trade war is low, and the public believes that the tariffs on Chinese goods are doing more harm than good. In a May 2019 Quinnipiac poll, 53% of respondents disapproved of Trump’s handling of trade with 39% approving, but support is polarized by party. Support among Republican respondents was 82% compared with only 4% of Democrats. In the same poll, 80% of Republicans supported the president’s policies toward China.

As these numbers suggest, despite the economic pain, Republican voters—including those in rural areas—appear to be sticking with the president. However, anxiety about the long-term effects of the tariffs on farms and businesses is growing.

The politics of talking about the trade war

The confluence of strong Republican support Trump’s trade policies and the real economic pain it is causing in the heartland has many GOP leaders walking a fine rhetorical line. Members of Congress from farm states, such as Sen. Chuck Grassley (R-IA) note both that China does not always follow fair trade practices but that the current tariffs are creating uncertainty for farmers. Other Republican members like Sen. Pat Toomey (R-PA) also acknowledge that “tariffs ‘are absolutely painful’ for farmers, but if it meant striking a good deal with China, ‘we might look back and say this was worth the price we are paying”.

In an interview with Fox News’s Chris Wallace in mid-May, even White House economic advisor Larry Kudlow admitted that, “In fact, both sides will pay…both sides will suffer on this”. Kudlow’s comments contrast with the president’s more sanguine tone regarding the trade dispute. Trump prefers to emphasize the price that China is paying because of American tariffs. In a recent Fox News interview, he argued that “They’re getting killed with the tariffs, China’s getting totally killed.”

Our research shows that the president’s emphasis on how the tariffs affect China may be politically expedient. Feelings about China are important in understanding what types of trade policies the public is willing to endorse, especially for members of the president’s party. Key to understanding Republicans’ willingness to support tariffs that harm the US economy is the belief that China is suffering more from trade sanctions.

How we did our research

In fall 2018, we embedded an experiment on the Cooperative Congressional Election Study, an academic survey weighted to be nationally representative of the adult population. We wanted to know whether the distribution of losses from a trade war would matter to overall support.

Respondents (N=576) read a vignette that a bipartisan group in Congress was considering the application of trade sanctions against a foreign country due to its use of unfair trade practices, that the country would retaliate and that this would result in a trade war. Respondents were randomly assigned to Canada, China or Mexico, the top three US trade partners. Subjects were also randomly assigned to consider the following three potential scenarios that vary in how much the US loses in absolute terms but also how much it loses relative to a country like China:

Respondents were then asked to indicate how strongly they opposed or supported the proposed trade sanctions on a five-point scale where 1 indicates “strongly oppose” and 5 indicates “strongly support.” On average, Republicans (Mean=3.8) are more supportive of trade wars than Democrats (Mean=1.8) across all three countries that we asked about.

Varying the size and distribution of losses of the trade war had no statistical impact on Democrats’ attitudes. However, it substantively influenced Republican support for trade wars, especially with respect to China. Republicans assigned to the third scenario above—where US absolute losses are the largest, but in relative terms, it does much better than China—were the most supportive of the trade war. As the figure below indicates, support among this group increased by nearly three-quarters of a point (0.72) on our scale compared to Republicans assigned to the first scenario where US absolute losses are minimized yet China suffers even less. Compared to the scenario where the US loses $25 billion in exports and China loses $5 billion, the scenario where the US loses $100 billion exports and China loses $500 billion is more popular among Republicans and this difference is significant at the p<0.05 level.

What our research can tell us

There are limitations to the conclusions we can draw from our analysis about current events. Our cue is about a bipartisan, Congressional act, not a unilateral, executive one. Yet, this was chosen intentionally to avoid evoking a partisan bias from respondents. Had we cued respondents to think of Trump’s trade policies directly, Republican support may have been even higher.

Caveats aside, our survey analysis suggests, as Trump himself has argued, that his base loves the trade war with China. Furthermore, our research indicates that Republicans are willing to support the trade war even if it means suffering large export losses, so as long as China suffers more. Indeed, Republicans were more supportive of scenarios where the US experiences greater export losses because costs for China were even more severe. The president’s rhetoric that the trade war will hurt China a lot more than it hurts the US, then, appears to be politically savvy and effective at keeping his base on his side.