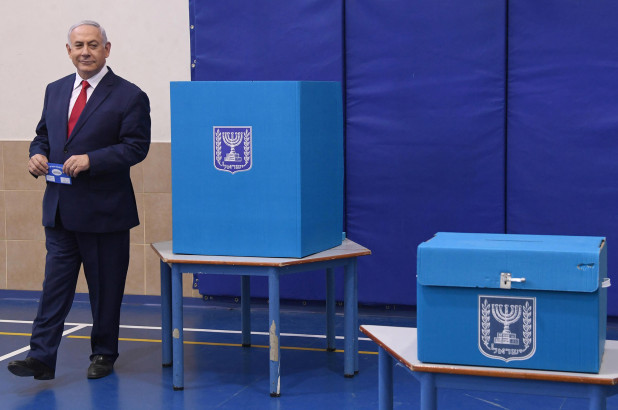 This is a guest post from Ben-zion Telefus. He holds a Ph.D. from Bar-Ilan University (2015), where he researched the war on drugs in the US and the EU foreign and security policies. Follow him on Twitter @BenzionTelefus

When Israelis vote in the coming September 17th re-run elections the issue on the ballot will remain the same: Prime Minister Benjamin Netanyahu’s political and legal future. Netanyahu’s control over Israel for the past decade led many to describe him as a sophisticated “Machiavellian” politician who mastered every available means to ensure his political power. Yet using the term “Machiavellian” to describe Netanyahu is an injustice to Machiavelli’s political thought and creates a misleading portrait of Netanyahu, who is anything but the prince Machiavelli envisioned.

The End Justifies the Means?

Netanyahu may appear to be the ideal candidate for the widely held perception of a “Machiavellian politician”. For someone who made political survival the essence of his political being, Netanyahu has impressively employed every guiding principle in the political realism textbook, sacrificing every personal or public value to this end. If, as Machiavelli advised, political survival depends on the cruelty of the prince who has no morals, then Netanyahu’s foreign and domestic politics fit this description.

In the name of his political survival Netanyahu has led an assault on the rule of law, embraced racist and anti-Semitic movements that enabled them to gain political power, and made a mockery of Israel’s war heroes, branding them and others ‘traitors’ just because they criticized him or became political opponents. Netanyahu’s willingness to use cruelty, cunning, and political trickery, while ignoring morality and values, earned him the image of an unmatched, unstoppable politician that reflects a utilitarian view of Machiavelli’s philosophy by which the end justifies the means.

A review of Netanyahu’s political behavior over the past decade presents a vivid example of a politician utilizing Machiavelli’s advice from “The Prince”. He has excelled in overcoming internal and external rivalries, suppressing any strong or rebellious underlings who pose a political threat by portraying them as political enemies or appeasing them with political payoffs. He also minimized his inner circle of advisers to those who are loyal and pleasers.

Netanyahu, wary of the potential political threat posed by popular IDF senior officers after their discharge, made sure to neutralize them by passing the “Cooling-Off Law”. And the last elections made clear why. Netanyahu knew that he must stave-off any veteran of the national security apparatus, especially IDF officers, from entering the political arena. In his mind they are the only ones capable of undermining his “Mr. Security” façade, honed throughout a decade of constant bully pulpiting.

At the same time, however, Netanyahu embraced a more prudent Machiavellian approach to security, demonstrating an abstentionist approach to the use of military power. Despite his endless bravado against Iran, Hamas and the Hezbollah, in his confrontations with Gaza, Syria, Lebanon, and Iran, he refrained from being swept away by populism and by public and political sentiments. Instead, he followed Machiavelli’s advice to use war and violence when necessary and not necessarily when just.

Netanyahu’s Machiavellian approach is also reflected in his diplomatic approach, employing fraud and obscurity in shaping Israel’s foreign policy. Thus, he shrouded his real foreign policy intentions, purposely obfuscating his objectives regarding Israel’s policy on major issues. To this end he used contradictory wording when addressing the Palestinian issue, one for domestic constituents and the other for the international community. Netanyahu applied the same ambiguity and opaqueness regarding Israel’s intentions to attack Iran, as a means of pressuring the international community into action.

Netanyahu’s use of Machiavelli’s advice for the Prince may, for some, justify the claim that he is the most successful politician in Israel since David Ben-Gurion. Yet if those making this argument strive to remain loyal to Machiavelli’s thought, they must not only consider, or select, one part of his work, “The Prince”, while ignoring his no less vital creation, “Discourses on Livy”. This is paramount, as the latter work expands the prism and distinguishes between a politician and a leader: in other words, the distinction between Netanyahu the politician and Netanyahu the leader.

While in “The Prince” Machiavelli offers advice for political conduct, in the “Discourse” he addresses the purpose of this advice – leadership. A true leader utilizes Machiavelli’s advice to the Prince not for his personal gain, but for the purpose of protecting the values of the Republic, what he calls the Virtues of the Republic. For Machiavelli, the fundamental justification for preserving these Virtues: a weaker church, military service, and social cohesion, is that it will safeguard the state’s internal stability and ensure the core national powers needed to contend with external threats.

This more encompassing view of Machiavelli’s thought puts Netanyahu’s ability to master the art of “The Prince” in perspective. It explains why Netanyahu’s decade-long rule has inflicted severe damage to Israel’s core Virtue, known in Israel as “Mamlachtiyut“ (statehood), a civic concept that refers to a common understanding that the integrity of the Jewish state is above all political divides. This principle, this Virtue, which David Ben-Gurion coined in the early days of Israel, laid the foundation of Israel as a Jewish and democratic state, or a democratic and Jewish state, a nation among nations with one clear objective: maintaining Jewish unity and minimizing partisanship.

Contrary to this view, in his decade-long struggle for political survival Netanyahu undermined every possible cornerstone of this delicate concept. Herein lies the great tragedy for Israel in Netanyahu’s political Realism. With all its immorality, Machiavelli wrote “The Prince” out of his pain for the disintegration of his beloved Florence. “The Prince” was not intended serve as a political guide on how to gain and maintain power, but rather as a guide on how to lead a state based on the republican Virtues. Hence, a true statesman, even if simultaneously a politician, will strive to realize the core principles presented in the “Discourses” and will not be content with the pursuit of political power. A true statesman protects the national Virtues, and in the case of Israel, safeguards Mamlachtiyut as Israel’s fundamental Virtue. A leader who does not seek to secure the Virtues and uses “The Prince” only to ensure his political power is not a true political realist leader, but rather an Un-Machiavellian prince. Such is Netanyahu.

How is Netanyahu destroying Israel’s (Mamlachtiyut) Virtues? First, by his continuous use of incitement and divisive rhetoric against any opponent, whether political rivals, the media, the judicial system or civil society organization, labeling them as traitors. Netanyahu’s politics ruptured the delicate fabric of social solidarity among the “tribes of Israel”. If Machiavelli dreamed of a Prince who would unite his beloved Florence, Netanyahu stokes discord and fuels friction to turn Israelis against each other, using divide and rule to consolidate his political power. “Is it better to be loved rather than feared or feared rather than loved?” asked Machiavelli. And his answer was that, “It might perhaps be answered that we should wish to be both, but if we must choose between them, it is far safer to be feared than loved”. Netanyahu embraced this insight wholeheartedly to his core. He has weaponized the use of fear and hatred as a tool to preserve his political power by appealing to nationalistic feelings and immemorial fears against the backdrop of Jewish history. He provokes public fear by reverberating the notion that Israel’s security depends on his remaining in power, such that if he is unseated by any of his rivals, they will bring disaster upon Israel.

By employing all the above tactics Netanyahu allowed anti-Zionist forces to grow and undermine the core values on which Israel was founded seven decades ago. He achieved this, foremostly, by turning a blind eye or surreptitiously enabling the strengthening of forces that aspire to turn Israel into an illiberal anti-democratic theocracy. This was made possible by his continued capitulation to the ultra-orthodox religious and ultra-right parties in his coalition, most evident in public debates on issues such as mandatory military service and praying arrangements at the Western Wall.

These are not merely domestic, cultural and social issues, as they bear direct consequences for Israel’s national security. Netanyahu’s acquiescence to anti-Zionist religious forces turned Israel into a partisan issue in the US congress, creating a deep schism with American Jewry. In doing so he undermined one of Israel’s fundamental security tenets and eroded one of Israel’s most important strategic assets – its relations with the Jewish Diaspora. By sacrificing these relations Netanyahu showed once again that he is willing to risk Israel’s future and security for his own personal and political survival, demonstrating that he is anything but a true Machiavellian prince.

Netanyahu is not the Machiavellian prince many see in him. Machiavelli’s classical realism hails the importance of leadership, of a statesman that steers his country in the stormy waters of an uncertain international system. For Machiavelli, leadership is the ultimate role that guarantees the future of the nation, and therefore a leader’s choices and decisions are of fundamental importance. Machiavelli maintained that the end justifies the means, but he also asserted that it is necessary given that all human actions, and those of the Prince in particular, are subjected to the verdict of history. In the case of Israel, Netanyahu’s choices and decisions, or indecision, led the State on the historical path towards the annexation of 2.6 million Palestinians. The verdict of history will judge him as one who preferred his own short-term survival over Israel’s basic Virtue: securing a Jewish and democratic state.

Evaluating Netanyahu according to this “Machiavellian” standard of leadership exposes his inability to make historical decisions that will secure Israel’s future. His alliance with illiberal, anti-democratic forces at home and abroad, at a time when Israel continues to slide down the slippery slope towards a bi-national state, attests more than anything else to his inability to lead, to be a true statesman and not just a clever politician. Instead of leading, Netanyahu has entwined Israel’s fate with his own political fate. A course of action that exhibits anything but Machiavelli’s political realism.

In avoiding any significant decision that will safeguard the Virtue of the Zionist state as Jewish and democratic, Netanyahu leaves Israel at the mercy of what Machiavelli called “Fortuna”, the goddess of fortune, to determine Israel’s future. The state of Israel’s growing corruption, unraveling social cohesion, and despair over a dysfunctional political system may remind some of the historical background that inspired Machiavelli’s work – a declining Florence engaged in internal struggles under corrupt religious rule. This backdrop also explains why Machiavelli’s work was not just a guide to accumulating political power, but rather a blueprint meant to remedy the ills of a divided Florence. However, in order to heal, to provide a remedy for a nation, a leader must embrace Machiavelli’s philosophy in its entirety – something that Netanyahu has never done.

A Call for New Guest Ducks

The Enemy’s Gate is Down