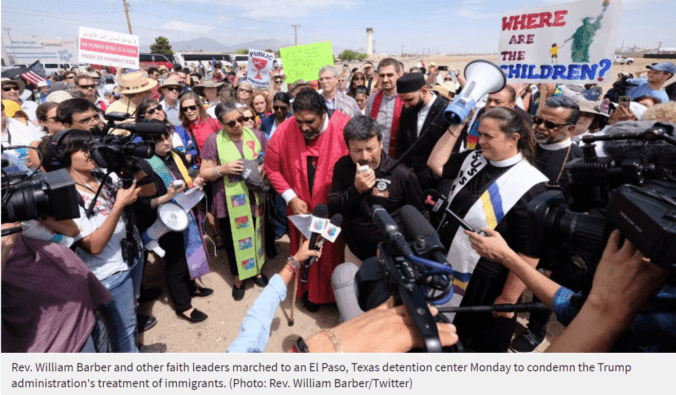 Resistance in an Age of Concentration Camps

Erica Chenoweth et al had a great article in the Monkey Cage yesterday about the Lights For Liberty protests. On June 12, Americans turned out in nearly 700 cities to protest the complex of detention camps along the souther border in which migrants, many of them asylum-seekers from the most dangerous countries on Earth, are being arbitrarily detained without due process and in inhumane, over-crowded facilities, with children illegally separated from caregivers and held in deliberately traumatizing conditions perhaps indefinitely, in violation of both the Constitution and international refugee and human rights law.

As Chenoweth et al note, this movement is only likely to get stronger between now and the election. In fact, it continues apace: in El Paso just last weekend another major inter-faith protest occurred, led by Reverend William Barber, a man sometimes compared to Martin Luther King Jr, and leader of the Moral Mondays movement to spotlight poverty and other great causes. This past Monday Barber lent his voice and inter-faith convening power to the cause of these concentration camps, with a sermon delivered at First Christian Church in El Paso, a peaceful march / direct action at a local detention camp, and a powerful video calling others to the cause:

But these high-profile protest events are but the most visible tip of the iceberg as Americans come together to resist concentration camps on American soil. (Note in response to CBP claims to the contrary: I use the term ‘concentration camp’ as the dictionary defines it: “a place where large numbers of people… are deliberately imprisoned in a relatively small area with inadequate facilities.”)

This movement includes not only the perhaps 350,000-500,000 Americans who turned out for the June 12 protests but those who are inundating their congresspeople with calls, sponsoring refugees, donating to organizations like RAICES, Annunciation House, Border Network for Human Rights, and Hope Border Institute, volunteering in these organizations with local activists and students doing advocacy research, volunteer relief work, legal aid, or signing up with a group called #CitizenPresence to travel in a steady stream to the border to bear witness as these camps.

Last week, I was among those Americans who spent my vacation time not at Nantucket but down in the El Paso / Las Cruces region. I’ve got an unfolding series of blog essays over at Lawyers, Guns and Money detailing what I’ve learned. Shorter version: it was a transformative experience not only connecting with local human rights groups and finding out what outsiders can usefully do (including show up to protest). Research by Christian Davenport shows it makes me likelier to go back and stay engaged.

I wasn’t alone on my journey. What I found most interesting was making small talk about concentration camps with an array of Americans during my travels – retail clerks, rental car agents, bartenders, Lyft drivers, activists, professors, conservative friends and friends-of-friends in the region, random Trump supporters at places I once lived, deported American residents trapped in Mexico seeking asylum once again, and even a bevy of guards at one of the most notorious concentration camps.

And what I learned is that this movement runs deep. Even those not “in it” are mostly appalled by what is happening. Even those I spoke to who lean right, or who previously voted for Trump don’t want to see children separated from their parents. They don’t want to see concentration camps on our land. They admit, grudgingly, that the US Constitution protects even these folks. The concentration camp guards I spoke to seemed frightened when I talked of the Nuremberg principles.

It’s easy to join this movement. There are many things to do besides wring our hands. You can donate, make calls, protest, host refugees, show up and argue with concentration camp guards. I hadn’t learned of #CitizenPresence until well into my trip, but this is the group folks like me should hook into who live outside the region and have time and money to travel – before making plans. They can connect you to locals, fundraise and give out small travel grants. Or, if you can support others’ travel but not travel yourself, make a donation to #CitizenPresence. I’ve got a fundraiser on my public Facebook page from this trip.

Erica Chenoweth and her co-authors are right that this is how we build the resistance. We get involved as we can, we talk to our fellow Americans across political fences, we travel and bear witness or support those who can. Her research shows this makes a difference. I’m proud to be an American right now. Let’s keep it Land of the Free.