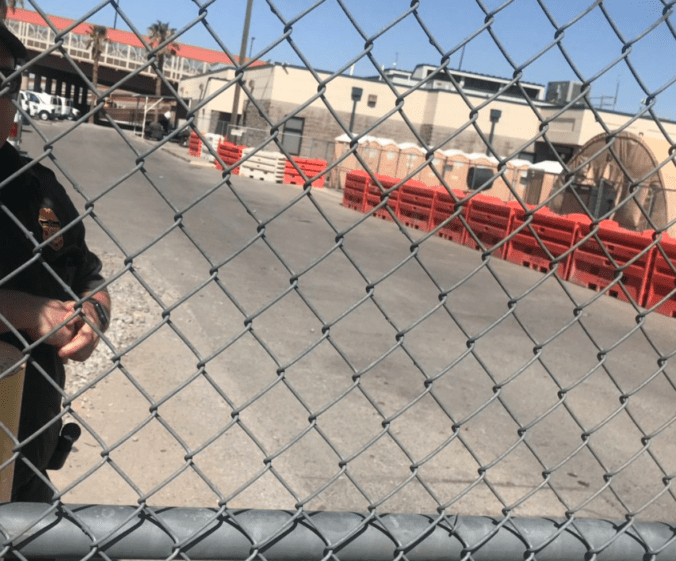 The Enemy’s Gate is Down

During my ten days this past summer on the El Paso border, some of the most interesting conversations I had were with the gate guards at a notorious detention facility, Paso del Norte.

These conversations reminded me of something I read as a teenager in a famous science fiction novel. In Orson Scott Card’s famous book Ender Game, in which squads of young boys are trained for battle in zero gravity arenas, protagonist Ender Wiggin realizes that fighting in a new situation (zero gravity) using conventional spatial perspectives could only confuse and disorient. Instead, Ender’s “army” takes advantage of others’ disorientation to achieve a tactical advantage. He has his men shift their perspective to think of “down” as wherever the enemy gate is. They launch from their own gate into the zero gravity arena feet forward instead of face forward, offering smaller targets. But more importantly, this shift helps them adopt a mental perspective of always owning the high ground.

Citizens aiming to combat Trump concentration camp policy need a similar shift in perspective to augment the many ways we already resist. First, much like a zero-gravity situation, the Trump administration has deliberately sought to disorient any resistance and knock the American public off balance, wondering how to resist. By creating and then constantly changing the rules and regulations, Trump makes it difficult for immigration attorneys to help their clients. By establishing and then abruptly closing facilities, Trump makes it difficult to track where detainees are. By unrolling a slew of human-rights-violating policies in drips and drabs, rather than all at once, they keep the opposition off balance.

Because Americans who believe in the rule of law are defending our Constitution in zero gravity, our standard rules of engagement are no longer enough. A combination of adversarial protests and court proceedings are important, and we all must keep calling our congress-people daily. But these strategies also maintain a safe distance from the guards – the actual foot-soldiers in Trumps concentration-camp-industrial complex. The ones whose resignation or refusal to carry out orders may be the one thing that could truly gum up the gears of Trump’s concentration-camp-industrial complex. Americans need to think about expanding our repertoire of direct actions.

In my travels at the border this summer I found lots of efforts are taking place. But one thing I don’t see citizens doing enough is actually approaching these detention facilities and politely asking the guards to explain and justify themselves. In my new article in The American Prospect, I talk more about what happened when I did just this.

I discovered their definition of a “refugee” is a bit different from what’s codified in the Refugee Convention. “These people’s countries are not at war, so they’re not refugees,” one guard told me. “Maybe they’re fleeing ‘violence’ but there is violence everywhere. You could get murdered in your own community.” Most of all I learned what mattered to these guards: To be seen as upholding an oath to protect the nation, to be able to convince themselves and hopefully all Americans that they were on the right side of history.

Americans can engage these guards and remind them of the Nuremberg principles. We can remind them they are vulnerable to prosecution if they follow orders, but have power—and moral courage—when they resist. Activists can laud heroes like former CPB agent-turned-activist Jenn Budd, who resigned her post due to the cruelty she witnessed and has been speaking out ever since. Citizens can consider the other kinds of assistance that would make it easier for people working in these places to speak out—or turn in their badges— rather than remain loyal to a regime bent on violating the human rights of civilians fleeing conflicts in their home countries.

The simple surprising truth is that these enemies of the people have their gates down. It’s disarming to them when people show up to talk respectfully, rather than protest. What you hear is that they want to be seen as law-abiding citizens, and that gives ordinary citizens room to maneuver.

“My brother is a US Marine serving in a combat zone in Africa. He would resign or go to prison before obeying an unlawful order to violate a civilian’s human rights. I know you’re as brave as he is. I think you just didn’t know the law before. Am I right?”

“Well, I’ll admit I don’t have Article 6 of the Constitution memorized…”

This strategy of engaging gate guards, like Ender’s change of tactics in zero gravity, can use a change in perspective to create a tactical advantage. It seizes the moral high ground by turning their role as law enforcers back on them, reminding them they are also bound by law. Showing up for interpersonal dialogue rather than in a mass with cameras shrinks one’s targets space – like entering an arena feet-forward – making it harder for them to fire or arrest and easier for them to disarm. One guard said to me, “It’s pretty innocuous when you come in here with no camera and can just have a conversation as two human beings without yelling and screaming.”

But when they lie, as I describe at TAP, it leads them into traps.

Above all, interpersonal dialogue with perpetrators works. It reminds them that America is a nation of immigrants who by and large wish to welcome refugees, whose grandfathers bled to defeat the Nazis. That even individual foot-soldiers have legal and moral responsibility. And that so long as there are concentration camps on our land, we will keep asking questions and insisting the law be followed. We’ll keep walking through the gate.