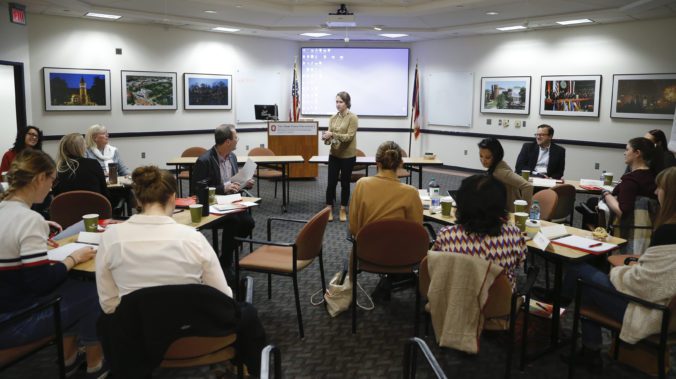 Exploring Obstacles to Social Cohesion in the Aftermath of Violent Conflict: A Scholar-Practitioner Symposium

This is a guest post by Kara Hooser and Austin Knuppe, Conflict to Peace Lab, Mershon Center for International Security Studies, The Ohio State University

Rebuilding social cohesion—restoring bonds of social trust that bind people together in communities and enable them to peacefully coexist—commonly serves as a central goal for peacebuilders engaging in communities fractured by political violence. Despite a growing consensus about the necessity of promoting social cohesion in the aftermath of widespread violence, questions remain about how scholars, practitioners, and donors can collaborate to implement effective peacebuilding practices.

To address these challenges, we brought together sixteen scholars and practitioners for the inaugural peacebuilding symposium of the Conflict 2 Peace Lab at the Mershon Center for International Security Studies at The Ohio State University.  Drawing on lessons learned from similar “bridging the gap” initiatives, we designed a workshop to facilitate exchange and find spaces for building community and mutual learning. Our time together focused on three themes: concepts and theories of social cohesion, effective peacebuilding practices, and monitoring, evaluation, and learning.

Finding Common Cause: Peacebuilding in Research and Practice

First, scholars and practitioners alike struggle with applying general concepts and theories of social cohesion to specific cultural contexts. Even when theories emerge from past field experience in a given conflict environment, translating theory into practice can be a challenge.  For example, one practitioner involved in peacebuilding in Lebanon observed that the concept of “resilience” doesn’t translate well into Arabic. Similarly, a colleague working in South Sudan has found that even when concepts like “peace” and “dialogue” do translate, how local populations interpret meaning can be quite different than how the organization conceptualizes and, subsequently, attempts to measure outcomes.

While researchers tend to favor methods that aggregate individual beliefs, attitudes, and behaviors, many practitioners focused on process-based outcomes that are less quantifiable, such as relationships with emerging leaders in local communities. To that end, a theme emerged around the need to “get down in the grass with the people” and “listen with our hearts and bodies” in order to build theories that align well with actual needs on the ground.

Second, participants discovered similar challenges in navigating relationships between donors and local partners. While both communities engage in internal review processes—whether it be through a conflict sensitive framework or Institutional Review Board (IRB)—making space for the agency of local partners often raises concerns with donors. While most funding agencies agree in principle with the goal of partner-led programing, in practice, donors impose outcomes and timelines that are ill-fitted to the context in which many peacebuilders operate.

For example, one peacebuilder working in Syria emphasized the importance of treating peace as a daily practice in places and suggested that laying the foundations of peace in the midst of war is intangible, and, therefore, difficult to prove effective to donors.  Researchers and scholars feel this tension as well. When it comes time to report research findings, there is often a lurking assumption that funding agencies prioritize clear evidence of a program’s effectiveness over the messy reality of peacebuilding in practice.

Third, informal discussions during the symposium created space for participants to share their personal motivations for engaging in the research and practice of peacebuilding. The centrality of personal relationships and shared history served as a major motivation for both communities.  Relationships are critical because they not only facilitate cooperation among the relevant stakeholders, but also encourage participants to reflect on the aspects of their own identity that sustain their work under adverse conditions.  During the “off-hours” of the symposium, many participants shared personal stories about how their gender identity, religious commitments, and family history motivate their work.

While the workshop enabled a consensus to emerge on several key issues, questions and points of clarification were left unresolved.

In particular, our participants identified tradeoffs between favoring generalizability and external validity on the one hand, and micro-level, context-specific knowledge on the other.  Many scholars pursue research that focuses on state institutions, political elites, and processes that have common characteristics across different cases.  For instance, two scholars presented experimental research on the impact of security sector form reform on social cohesion in post-conflict settings in Iraq and Liberia.

In contrast, most practitioners develop expertise in specific countries and contexts; they embrace “truth” as inherently pluralistic and sometimes divergent. One peacebuilder focusing on sexual and gender-based violence described the wrestling practitioners must do with the many narratives of truth among people—that even “rape” is conceived of differently in spaces of widespread gender violence, requiring us to reconsider how we use concepts and frameworks for research and practice.

Furthermore, practitioners emphasized this idea of accompaniment—or walking alongside the communities they serve and meeting people where they are on the ground—which asks us to embrace complexity, ambiguity, and long-term timelines. To illustrate the need for accompaniment, one peacebuilder introduced the group to a local partner in South Sudan who poignantly noted, “We have ownership. We know our needs better than the experts.”

While scholars might prioritize the identification of causal effects, peacebuilders often value outcomes that center individual lived experiences and transformation, which proves difficult to measure and places less value on generalizability. The potentially extractive nature of knowledge-building was also considered, particularly the need to frame research and practice as journeys of discovery where knowledge and emergent insights are locally-owned. One peacebuilder emphasized the crucial role unlearning control has had on his organization’s ability to effect change in South Sudan: “It’s not our knowledge to extract. We don’t own it,” he observed.

Despite these differences, a recognition emerged around shared goals in practice and academic circles—that the gap between scholars and practitioners is not so wide or unbridgeable as many assume. While the languages we use and the tools we employ are varied, both groups expressed mutual respect and a desire to learn from one another. For example, several practitioners recognized their own observations about the riskiness of peace in a scholar’s presentation on ontological security and the perpetuation of conflict as routine and familiar.

The “academic/practitioner” binary proves far less distinct in reality. Multiple scholars eschewed this binary as not truly capturing how they see their own work—balancing theory, complex methods, and close relationships with and incorporation of the stories of people on the ground. To that end, the group emphasized an ethos of co-learning among scholars, practitioners, and local partners.

The Way Forward: Productive Collaboration Between Scholars and Practitioners

After spending two days together, one question loomed over the end of the symposium—“What’s next?” Building on models from the international development community, the Conflict 2 Peace Lab will start funding pilot projects between scholars and practitioners to facilitate collaboration at the inception of a new project. Funding pilot projects will allow both communities to remain creative and flexible as they discover their relative comparative advantages and project goals. Participants also agreed to host the next symposium in a region accessible to local partners and practitioners. Toward that end, the next symposium will feature a training component where participants can develop new skills in research and practice.

Finally, participants agreed on the centrality of providing students and young professionals with opportunities to develop skills that bridge the divide between research and practice. Inspired by a presentations on conflict mediation, one participant decided to design an undergraduate course around the theme of a “conflict resolution tool kit.” Such efforts ensure that the next generation of scholars and practitioners will be well equipped to tackle the complexities of rebuilding social cohesion in conflict-afflicted states.

Is Domestic Violence a Security Issue?