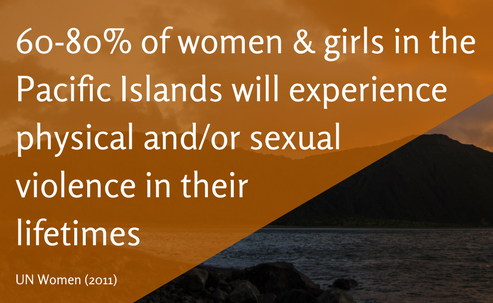 Is Domestic Violence a Security Issue?

This post is cross-posted at Climate Security in Oceania.

For my course on climate security in Oceania, we read a post on the New Security Beat from Volker Boege from the Toda Institute. The piece is based on a wider report on climate and conflict in Oceania. He writes:

In overcrowded squatter settlements in the few urban centers in the Pacific Islands, domestic violence is increasing. These settlements are also often the sites of violent, sometimes deadly, conflicts between communities from different islands, many of whose members left their home islands because of the effects of climate change.

In the class, we had a vigorous conversation about whether domestic violence constitutes a security threat. Because violent conflict is relatively rare in the region in the contemporary era (the Solomon Islands and Papua New Guinea are exceptions), efforts to think through the connections have led to a more expansive emphasis on other links between climate and security. Here, Boege writes in the wider report:

In Oceania today violent conflict is mostly inter-group in the local context, usually at a relatively low level of intensity, or it is everyday dispersed violence, such as domestic violence against women and children. This everyday violence and these local low-intensity violent conflicts can often be linked to the social effects of climate change, in particular to climate migration.

The conversation about the boundaries of the field of security studies led me to have some further thoughts that I wanted to explore here.

It is well-established that gender-based violence (GBV) and the climate crisis are interconnected, and the Pacific Island region is already facing this haunting reality. Disasters and environmental degradation are amplifying gender inequalities and reducing protective factors that work to prevent violence against women and girls.

In Vanuatu after two tropical cyclones in 2011, the Tanna Women’s Counselling Centre reported a 300% increase in new domestic violence cases.

Rape and abuse, they noted, are frequently reported after disasters as women and children seek water and firewood.

A regional fact sheet suggests problems of physical and sexual violence throughout the Pacific are a real problem:

UN Women estimates that 60-80% of women and girls in the Pacific Islands will experience physical and/or sexual violence in their lifetimes, although the rates vary across states, territories, and cultures.

This begs the question of whether domestic or partner violence constitute security issues.

Human Security and Its Limits?

For those who have studied national security, you’ll know that the traditional study of security focuses on armed external attack by foreigners against the nation-state. There have been efforts since the late 1980s if not earlier to broaden the scope of security to encompass other harms and other dimensions of security beyond the nation-state.

In 2001, Roland Paris wrote an article on human security in International Security. He noted that traditional security problems had two things in common, (1) whose security was threatened and (2) the nature of the security threats. Historically, national security considered military threats to states which corresponds to Cell 1 in the typology below.

Redefining security in the 1990s, Cell 2, broadened the scope to include non-military threats to states, including pandemics and environmental change.

Gender violence fits most clearly in Cell 4, and the human security  implications of climate change did receive a full chapter in the last IPCC 5th assessment report (though won’t in the next).

Paris’ critique of human security sees it as so broad as to make the concept of security anything bad that happens to human beings. He worries that such conceptual stretches starts to make security meaningless. In my own work, I make the case that large-scale loss of life from climate hazards is a security threat
(1) because the military is often called upon for humanitarian rescue and response.
(2) the damage from large-scale loss of life rises to the level of a security problem because the magnitude of the harm is large enough that if a foreign agent were to carry it out, it would be considered an act of war. I argue that it is not agency that matters but the level of damage.
(3) failure to respond to a devastating climate hazard could lead to legitimation challenges for a government.

This was an attempt to broaden beyond state security but not one  fully embrace human security, as a means of keeping the conversation of climate and security something conventional security actors would recognize.

In that light, I think the question is under what conditions would a conventional security actor like the Department of Defense consider domestic violence to be a security threat?

I think if it could be shown that domestic violence is a leading indicator of state breakdown and political stability that they might recognize it as something that they would be worried about. In other studies from the State Failure Task Force (later the Political Instability Task Force), infant mortality was found to be a strong predictor of state failure (though that itself is a fuzzy concept).

In the absence of empirical work that finds domestic violence can be a prelude to wider forms of political instability (and here there may be ample work out there that I just need to be look for), I do think that domestic violence on its own might be seen as a bit too far afield from the conventional security focus of military organizations (they might be wrong for thinking that!).

Having said that, the experience of women in war, and the role of sexual violence by combatants has received significant attention by Dara Cohen among others. Sensitivity to the gender impacts of war or the disproportionate impacts on women of extreme weather events are important considerations that the military would have to take into account if they are thinking about preventing large-scale loss of life either in wartime or in the wake of a natural disaster.

Perhaps the question of whether military organizations consider something to be a security threat isn’t the right question to ask. Other civilian security professionals might consider the gender violence to be a security problem if, as Thomas and Candolfi claim, climate-related disasters lead to a large scale-up in violence against women in their wake or even if more gradual processes of sea-level rise and drought lead to large increases in gender violence.

Perhaps that ambiguous threshold of “large” needs more precision. At the very least, we need more research (or, in my case, at least more exposure to existing research) that establishes gender-violence and climate change are connected.

Exploring Obstacles to Social Cohesion in the Aftermath of Violent Conflict: A Scholar-Practitioner Symposium