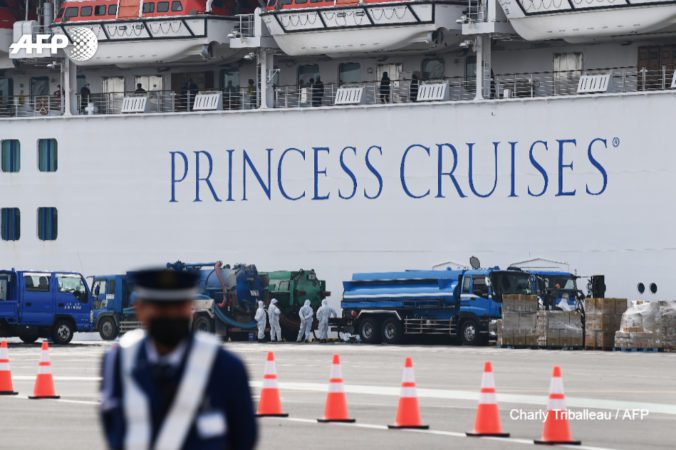 If you’ve been following the coronavirus outbreak, you’ve probably heard about the Princess Cruises ship, quarantined in Japan with thousands of passengers on board. It sounds like the veritable cruise ship from hell. Of the 1219 passengers screened for the virus, some 355 passengers tested positive for COVID-19, including some 44 Americans. The Americans were finally being evacuated today after having been quarantined on the ship since February 5th.

The horror of confining thousands to a boat underscores the incredible measures governments have undertaken to try to contain the virus. The Princess Cruises ship harkens back to the original meaning of the word quarantine as Howard Markel reminds us:

Quarantine laws — from the Italian “quaranta giorni,” meaning 40 days— were first developed in Venice in 1370, to keep the bubonic plague at bay by banning any ships and goods for the time it seemed to take most epidemics to burn themselves out.

But, were these extreme measures justified? This is the third in the series on the coronavirus COVID-19. In my first post, I provided some background on the nature of the virus, from what we know. In the second, I reflected on the belated declaration of the Public Health Emergency of International Concern by the World Health Organization in late January 2020.

In this post, I want to reflect on both the international restrictions on travel to and from China. In the next post, I’ll reflect on China’s internal response.

Should international actors have restricted travel and flights to and from China?

Contrary to guidance from the World Health Organization, many countries responded with travel restrictions, as also occurred during the 2015 West African Ebola crisis.

As of February 11, more than 50 countries or territories had restricted travel or tightened visa requirements in response to the COVID-19 outbreak, this according to the International Air Transport Association. These included China’s neighbors — North Korea, Mongolia, and Russia — which closed their land borders and countries like the United States and Australia which blocked Chinese arrivals. Three U.S. carriers also stopped their flights to China.

Like China’s quarantine policies, observers regard such travel restrictions as an overreaction and unlikely to work. As Yanzhong Huang argues these measures often last much longer beyond crisis periods, so the economic damage is often far larger than it should or could be:

Economic damage can be sustained because many measures instituted in the outbreak (e.g., cancelling flights or shutting down borders) tend to be “sticky” and not so easy to rescind.

He reminds us that these fear-driven policies often result in competitive policies that undermine cooperation on say sharing pharmaceuticals or medical equipment. We have seen some national hoarding and restrictions on exporting masks (even though these seem to have limited impact on preventing exposure). India imposed an export restriction which it then lifted in early February.

There are other ways in which such travel restrictions often prove ineffective. As Catherine Worsnop argued, people will seek to evade these controls, leading to even more repressive efforts by states in some cases:

It’s difficult to evaluate whether these measures were at all warranted under the circumstances. With China implementing province-wide quarantine measures in Hubei as well as more extensive controls on population movements through the rest of China, it is difficult to find fault with international actors, who thus far have limited information from China on the scope and nature of the virus.

If China had been more forthcoming early on about the virus, more transparent in its response to the virus, and more willing to accept assistance from international interlocutors, it would be more difficult to justify these extreme restrictions on population movements.

That said, as soon as it is clear the threat has diminished (which may already be occurring, it will be important for international actors to rescind these restrictions as soon as possible.

Former FDA Commissioner Scott Gottlieb expressed his displeasure with China’s lack of cooperation with the international community, underscoring the distrust of China that has fueled fear-based policy responses around the world.

Add to the long list of China’s infractions against world health: They refused to share viral samples or process for synthesizing it; they only admitted there was human to human spread Jan 20 the same day they disclosed 14 healthcare workers were infected. https://t.co/g22WjKAiSt

In my next post, I explore the adequacy of China’s domestic response.

Practicing Academic Kindness in the Classroom