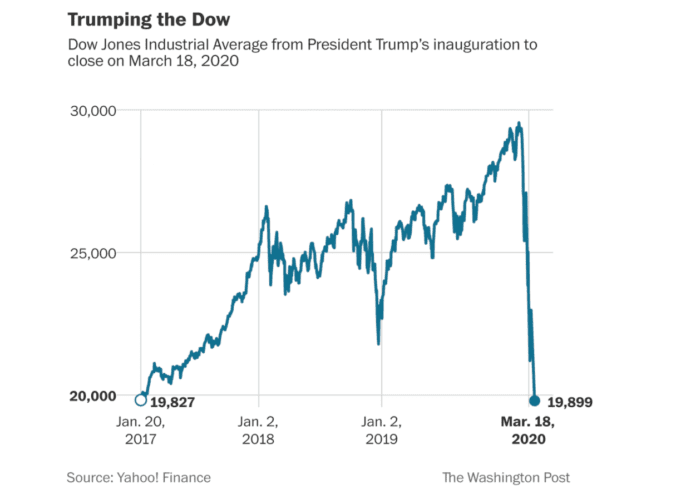 COVID-19 and the Start of a Global Recession

This is a guest post from Brendan Skip Mark, an assistant professor in the political science department at the University of Rhode Island (URI). His work focuses on International Organizations and human rights. He is a co-director of the CIRIGHTS human rights dataproject.

The official definition of a “recession” is a fall in real GDP for two consecutive quarters. It usually takes a while for the data to show this, yet it is already clear that production is falling globally and will continue to fall. We are in a global recession. It is still too early to tell how bad this crisis will be, and its severity will depend on how governments and international actors behave.

While the worst effects of the Coronavirus (COVID-19) are still to come, we are already seeing massive economic disruption. The Coronavirus has been declared a pandemic by the World Health Organization (WHO) and government efforts to contain it appear to be failing; German Chancellor Angela Merkel said 70% of the country may eventually be infected, and infections in China, the US, Canada, Italy, Iran and many other countries are proving a formidable challenge.

The economic outlook is dire. We are likely to see significant disruptions in global commodity supply chains. Evidence suggests this is already happening as imports from China are down as Chinese efforts to contain the Coronavirus resulted in a decrease of exports. News agencies are reporting that the cost to U.S. retailers could be $700 million dollars. China exports many raw materials that are used in other goods, so as Chinese production falls, commodities that make use of those raw materials also cannot be completed.

China is not the only country with supply chain problems. As the virus spreads, more countries will experience similar problems. In our globalized world, when one country suffers economically, it ripples to others causing economic problems there as well. As more countries experience negative economic shocks, this ripple intensifies. This is especially true when countries begin closing their borders and sealing themselves off as the US has done with most of the EU and Canada.

Declines in Supply and Demand

This global supply chain disruption worries investors, and expectations of lower profits cause large falls in stock market prices. Many businesses have closed, either by their own initiative or by government demand, and businesses that were struggling are more likely to fail the longer they stay closed. Demand for the goods and services is also in decline as fewer people are going out. This is all particularly true for industries associated with tourism.

Some businesses (and schools) are operating remotely, thus helping slow the spread of the virus while maintaining business as usual (with a predictable loss in efficiency). Some businesses are covering individuals’ salaries while they are closed down. This is very costly, but is helping to mitigate the crisis for their employees and giving the business pretty good PR.

Many businesses are facing financial pressure to lay off workers. Since there is less demand for goods and services, businesses do not need as many people working. Treasury Secretary Mnuchin predicts U.S. unemployment could hit 20%. As people get laid off there is less money being spent on goods and services which further decreases demand leading to more layoffs. Those who will be hit hardest are those who can least afford it, part time workers, those in the gig economy, and those in the service sectors.

Many individuals cannot afford a month or two of rent without working (not to mention utilities, food, etc.) so this has the potential to bankrupt many individuals. A common statistic that has been reported is that 40% of Americans cannot afford a $400 unexpected expense. This will cost most individuals far more than $400 and we can already see people breaking down in despair, having been laid off with no new source of income.

Domestic Efforts to Mitigate the Crisis

Social safety net programs like universal healthcare and generous unemployment insurance can help offset these costs. The United States has neither of these and will likely suffer worse economic consequences as a result.

President Obama for example gave out stimulus checks in 2008 as well as tax rebates in an effort to jumpstart spending. Governments will need to commit significant resources to minimize this crisis as half-measures are unlikely to be effective. Many economists argued that stimulus spending under President Obama was too small to be effective. A bill proposed by Democrats has tried to inject cash into the economy by giving people $4500 cash. This would go a long way right now, but whether it can get through a polarized legislature is a different question.

There is only so much money governments are willing or able to commit and those with an existing debt burden have much more difficult decisions to make. Do you help businesses and investors, increase spending on healthcare institutions, ensure citizens and workers have cash to spend, all of the above? Domestic politics during a crisis involves a lot of bargaining among leaders and socioeconomic groups about who gets helped and who pays the cost of increased spending. The poor almost always lose out, along with those who do not support incumbent leaders.

International Efforts to Mitigate a Crisis

When there are global threats to economic stability, International Organizations (IOs) like the United Nations (UN), the World Bank, and the International Monetary Fund (IMF) can help promote cooperation between states who might otherwise pursue isolationist policies.

During the 2008 global recession for example G20 countries expanded IMF funding by $250 billion dollars which the organization lent to countries facing crisis, helping to mitigate the global recession. Crisis often sparks debates about whether countries should be more self-reliant and less globalized. In an age of globalization, economic trouble in one country spreads to many others creating incentives for leaders to try and go at it alone. Populist leaders in particular often pursue nationalist policies, like President Trump’s America First agenda, and argue for decreased spending on these organizations.

IOs, however, are not exempt from politics. Member states which fund these organizations often interfere in their activities for political gain. IMF lending for example is often criticized for asking borrower countries to pursue austerity policies that benefit businesses and harm the poor and workers; or it is criticized because powerful IMF members like the US interfere in lending decisions and undermine their success.

China has used its political power to affect the WHO’s activities in the past, and most recently in its response to the coronavirus virus. The World Bank created a pandemic bond meant to be used to fight pandemics, and while it was great for investors, it failed miserably in battling the West African Ebola outbreak in 2015. The WHO was also criticized for its slow response to the Ebola outbreak.

In response to the coronavirus, the World Bank is fast-tracking relief packages of $12 billion to help fight the disease. This aid can be used for emergency health responses including detection, preparedness, and prevention policies. It can also be used to ensure that critical goods (like many health products) continue to be produced and exported/imported where they are needed.

The IMF has said it will mobilize its full $1 trillion dollars in lending capacity to help countries; IMF Rapid Financing Instrument (RFI) can provide $50 billion quickly without the need to engage in a lengthy bargaining process over the conditions attached to loans. While Iran has not gone under IMF lending since 1962, Iran has already applied for $5 billion in funding under this instrument as it faces 10,000 cases of Coronavirus. This is telling of the severity of the crisis.

The IMF has also expressed a willingness to augment existing loans, grant debt relief, or give out new loans. These may help countries free up resources to bolster their healthcare institutions and fight the disease. It is times like these that international financial institutions can play an important role in mitigating global economic crises. The WHO has also taken a leading role in the dissemination of information and expertise to the public, offering advice for how to alter your behavior and what to expect.

Yet, there is good reason to believe these organizations hold some responsibility for the pandemic we are currently seeing. States could have taken early preventive steps if the WHO hadn’t publicly stated that China had the pandemic under control despite evidence to the contrary.

The IMF has also been criticized for weakening health institutions around the world, so it is worth asking how World Bank and IMF money will be spent, who gets funding, and whether we see countries who take out such loans cut public services and social welfare spending as past loans likely created the conditions which make it harder for governments to combat this pandemic.