This crisis has us all having a lot of feelings.  I am feeling a bit nostalgic for Hegemonic Stability Theory. While Comparative Politics will have much to say about why countries varied in their responses (also see Max Brooks’s World War Z [the book, NOT the movie] to get a taste of the comparative politics of pandemics), it is the job of IR (and epidemiologists) to discuss why the disease spread as it did and why the international community largely failed. While there are many theories that may apply, I think that HST applies quite well.

Others have had great stuff on this–Paul Poast has podcasted his twitter thread, Tanisha Fazal has a great twitter thread, and Jeremy Pressman has a great slideshow.  They all focus on important dimensions of the crisis as do many posts at Duck of Minerva.  One could just read Dan Drezner’s Theories of International Politics and Zombies, and replace Zombie with COVID-19 and get much help in understanding why cooperation has been so hard.  To be clear, as this NYT infographic makes clear, this thing was going to spread.

I am going to focus on a single theory here–hegemonic stability theory.  Used to explain the failure to respond to the Great Depression and the successful boom in international trade and such after World War II, Charles Kindleberger (book, article), Robert Gilpin, and others have argued that international cooperation is difficult.  When there are collective goods that require international cooperation–stable exchange rates, open trade system, etc–it is far more likely that countries will cooperate if there is one major player who is powerful enough to provide some of the key ingredients to make the cooperation happen as well as encourage (with carrots and sticks) others to join in.  The classic tale is that the UK was the hegemon on the 1800s, facilitating free trade and such, and that it was no longer able or willing after World War I.  The US might have been able at the time, but was not willing.  This was a lesson learned by FDR and then Truman, so that the seeds of the international trading order and exchange system and such were drawn up during WWII at Bretton Woods (some of my UVM students would answer “what is Bretton Woods” with “a ski resort in New Hampshire).

In the long run since the end of WWII, the American leaders largely continued to support the various cooperative mechanisms with some famous exceptions (Nixon going off the gold standard if I remember my grad school readings right).  One of these collective goods has been an international health regime–a set of principles, norms, rules, and decision-making procedures to handle …. pandemics.  The World Health Organization is part of that system, but it crucially relied on American power–that the US in an emergency would provide expertise (CDC), troops, dollars, and, yes, leadership.  We saw some of this in action during the Ebola outbreak that caused Trump to famously freak out about.

This time around, well, the US did not provide leadership.  Unlike 1920s Britain, the US still had plenty of capacity to lead the world to respond to this.  China clearly was not ready as it lied about the early numbers and reacted poorly at first. Key ingredients for any regime, but especially the public health regime (I have not studied it so I am just riffing here), is credibility and transparency.  These bits and pieces of governance do much of their work by providing clarity and by defining the rules and expectations (yeah, I guess Keohane was mostly right).  China is poorly suited to provide the leadership needed since, well, as an authoritarian regime, its first instincts are to deny and to limit the spread of information. 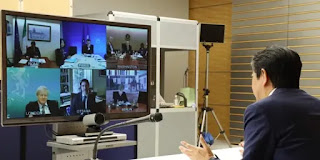 Alas, the US is currently led by autocrat-wannabe’s.  Trump and his coterie did not want concerns of a pandemic to undermine markets, mostly because his key card to play in November in his re-election campaign was the state of the economy.  So, the US did not generate good information (very limited testing, a desire to keep the numbers down), which meant it could not lead even if the President wanted to do so.  Plus the President is a unilateralist to his core, so he had no instincts to bring the international community together on this.  Last week, we saw the G-7 meet online, and, damn, little got done.  And it happened last week, not in January or February.  The thing about pandemics is that it is a race against the virus, and the US chose not to run that race.  And because the US did not, there was not much ability or interest for anyone else to facilitate cooperation to manage this fight together.

There was and is a failure to cooperate.  There is some bilateral stuff going on, but the credibility of the CDC is now tarnished because it is locked into the yes-man system imposed by the Trump administration.

This is all incredibly frustrating because the US and the world could have done much more.  Yes, the virus would have gotten out, but its spread could have been limited.  The WHO could have had more assets and heft behind it with US leadership, the CDC could have done more to get tests out earlier, and on and on.

But it did not happen.  Maybe one does not need a hegemon, a very powerful acting willing to lead, to have international cooperation, but in a crisis, having such an actor sure is handy.