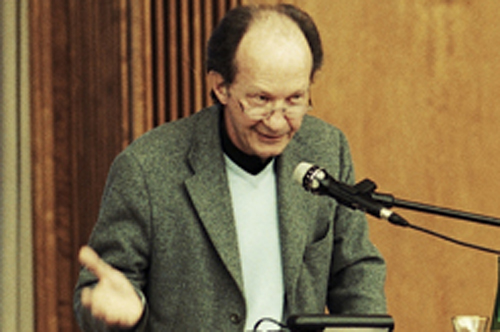 Experts, Public Intellectuals, and the Coronavirus

This is a guest post from Peter Verovšek, a Lecturer (Assistant Professor) in Politics/International Relations at the University of Sheffield

The Coronavirus has turned us all into amateur epidemiologists. This desire for greater understanding makes sense in the face of a threat as novel and as dangerous as COVID-19. The shutdown of massive sections of the economy and state-mandated orders to engage in social – or, more accurately, physical – distancing has left the majority of us stuck at home, wondering when things will go back to normal and worrying that they never will.

As a result of this uncertainty, we are all breathlessly reading scientific reports on pandemics, such as the paper from Imperial College London, which serves as the scientific basis for government policy in the UK. Previously obscure experts on viral pandemics, such as Neil M. Ferguson and Nicholas A. Christakis, have built massive followings on Twitter almost overnight.

Clearly experts have an important role to play in combatting the novel Coronavirus by advising governments, informing citizens, and conducting the basic scientific research necessary to address the crisis in real time. In the words of Michel Foucault, these “specific intellectuals” are supposed “to pose problems, to make them active, to display them in such a complexity that they can silence the prophets and lawgivers” by making the severity of the crisis clear.

However, in addition epidemiologists and scholars of public health, many other researchers – including many political scientists and philosophers – have also sought to cope with the current situation by putting their thoughts down on paper (myself obviously included). In and of itself this is not a bad thing.

On the contrary, non-specific, “general” or “public” public intellectuals play an important role in democratic life. Because they have the privilege of voicing their opinions only when they deem it necessary, such figures are able to focus on the potential dangers associated with the interventions advocated by experts, who are caught up in the minutiae of crisis management. Jürgen Habermas therefore argues that public intellectuals have duty to speak out “when current events are threatening to spin out of control – but then promptly, as an early warning system.”

Many of the political scientists and political theorists writing on the Coronavirus live up to the ideal of the public intellectual, “who seeks out important issues, proposes fruitful hypotheses, and broadens the spectrum of relevant arguments.” For example, Judith Butler observes that the indiscriminacy of the virus should help to remind us that we are all “equally at risk of falling ill, losing someone close, living in a world of imminent threat.”

Similarly, Slavoj Žižek has voiced the hope that the radical changes that have been forced upon us will lead us collectively to rethink “what appears impossible within the coordinates of the existing world order,” instead of regressing “to open barbarism, to brutal survivalist violence” of the kind visible in Donald Trump’s desire to put “America first” by purchasing a potential vaccine developed by German researchers for exclusive use in the United States.

However, some of the intellectual responses to COVID-19 have also fallen prey to the conceit of unwarranted expertise. In “The Invention of an Epidemic” the Italian political philosopher Giorgio Agamben deploys his most famous theoretical concept to warn against “the increasing tendency to use the state of exception as the normal paradigm of government” (emphasis added). In making this argument, he is fulfilling his role as a public intellectual by warning against the possible long-term consequences of normalizing the kind of public monitoring, surveillance and the restrictions on movement deemed necessary to fight the Coronavirus in its acute phase.

Unfortunately, instead of restricting himself to exploring “the ethical and political consequences of the epidemic,” Agamben proceeds “to give opinions on the gravity of the disease.” Even though he has no qualifications in public health or epidemiology, he argues that COVID-19 is just “a normal influenza, not at all dissimilar to those that normally recur every year.” By arguing that current public health measures are “frenetic, irrational and entirely unfounded,” Agamben’s interventions threaten to exacerbate the crisis by encouraging individuals to violate these restrictions put into place for reasons of public health.

Public intellectuals have a vocation to act as what Pierre Bourdieu calls “defenders of the universal” by ensuring that all viewpoints and possibilities are considered. More specifically, from their privileged position they are called to engage in public debate in order to ensure that the rights and interests of those who are most vulnerable in society are protected. The worst part about Agamben’s contributions is that they threatens precisely these most vulnerable portions of the population: the elderly, those who have serious pre-existing medical conditions, and those who have no and/or limited access to health care and basic hygiene.

Should we be concerned about the expansion of state power in the face of the crisis? Of course. Is there a danger that new forms of surveillance and monitoring developed in order to fight COVID-19 will be normalized and will threaten basic rights and liberties even after the pandemic abates? Yes again. However, public intellectuals should not undermine experts or engage in conspiracy theorizing by arguing, as Agamben does, that “the authorities

their utmost to spread a state of panic, thus provoking an authentic state of exception.” On the contrary, they are called to ensure that what needs to be done is done is a transparent and democratic way – i.e. that the current “state of exception” is warranted and comes to an end once the crisis is over, to speak in Agamben’s terms.

Clearly, the crisis sparked by COVID-19 has the potential to inaugurate a new era of digital surveillance, tracking, and control. However, it also has the potential to generate positive outcomes by relegitimizing the power of government after decades of privatization have resulted in a profound “hollowing out of the state.” More generally, the willingness of states around the world to inflict a recession upon themselves in order to save the lives of their citizens, the virus has also “shattered the myth that the economy must come first.”

It is often said that in addition to their many dangers, crises also present opportunities. This is clearly the case with the coronavirus. Public intellectuals have an important role to play in ensuring that this crisis serves to do the latter, not the former. While the response to the pandemic suggested by public health experts and mandated by governments clearly has the potential reinforce to repression and nationalism, it can also result in greater solidarity, as Žižek argued, through  “the local mobilization of people outside state control as well as strong and efficient international coordination and collaboration.”

Instead of undermining the response through pseudo expertise and conspiracy theories, public intellectuals with a background in political research have a duty to help ensure that the response to the coronavirus makes us more aware of what we can do when we decide to act collectively for the good of all – and to keep this awareness alive once the crisis starts to fade.