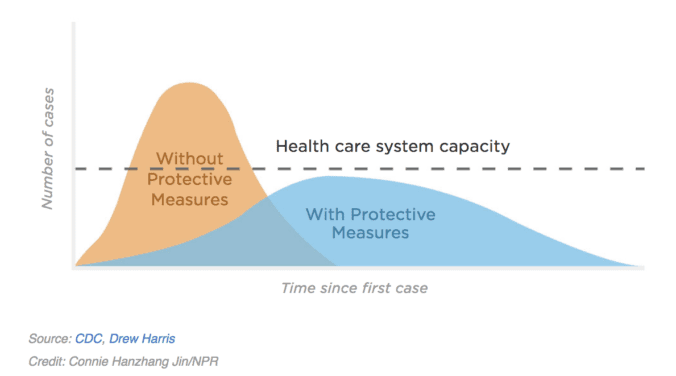 The general narrative is that preventative measures such as hand-washing and social distancing can slow the transmission rate of COVID-19. The importance of such efforts cannot be understated, but the reasons are often poorly understood.

For example, USA Today reports that slowing the epidemic can “help buy time to develop a vaccine and prevents the healthcare system from getting overwhelmed all at once.” And this is important as “flattening the curve” has become the global motto for addressing the ongoing crisis. Moreover this recommendation was a key feature in the Centers for Disease Control and Prevention’s (CDC) 2017 updated guidelines for addressing a potential influenza pandemic.

A discussion of the curve on CNN leads with the header that “It’s not about you; it’s about the people you will infect.” Though important, this misses two larger points. First, flattening the curve does not necessarily reduce the number of infections or death in the duration of the epidemic. Second, a potentially larger point that strains introduced by COVID-19 could dramatically worsen other health outcomes, perhaps to degrees worse than the direct impact of COVID-19 itself.

The consequences of an overburdened infrastructure were dramatically illustrated with the “2014” West African Ebola epidemic, which saw nearly 30,000 cases and over 11,000 deaths. The swift transmission of Ebola was attributed to various causes, including the limited capacity to identify and diagnosis suspected cases, inadequacies in the implementation of preventative measures to slow its spread, high mobility of people, and distrust of recommendations from government.

Yet, health indicators were dramatically improving prior to the outbreak. For example, Liberia’s deaths from malaria and other neglected tropical diseases nearly halved between 2008 and 2014, dropping from around 5300 to just over 3000.  Similar, though less dramatic, trends had been seen in Liberia’s neighbors. The spike in cases in 2014, however, would quickly prove overwhelming.

Much attention was given to the lives lost to Ebola. The consequences of the outbreak beyond Ebola itself was also catastrophic, quickly stopping and reversing prior gains in public health. Researchers have estimated that the Ebola outbreak resulted in upwards of a 50 percent reduction in access to healthcare services. The implications of reduced access are illustrated most dramatically with major diseases such as malaria, HIV/AIDS, and tuberculosis.

One study posits that the Ebola outbreak increased the mortality rates from these diseases by over 6,200 in Guinea, 1,500 in Liberia, and 2,800 in Sierra Leone. This represents a total estimated sum of over 10,600 additional deaths from these causes across the three countries, nearly reaching the fatalities caused by Ebola itself (11,325). Health consequences, however, were far from limited to these conditions.

A study of Sierra Leone found measles cases increased from 48 per month to over 568. Particularly hard hit was the Lola Prefectorate in Guinea, which—after seeing no suspected measles cases in 2014, saw over 250 by March 2015. Disruptions in vaccinations programs resulted in estimates that over 100,000 additional cases of measles could be seen in the next 18 months, with as many as 16,000 deaths. Fortunately, major vaccine initiatives helped avoid a worst case outcome.

Generalizing from other epidemics

To be fair, Ebola presents special challenges. Aside from its alarming death rate and (often exaggerated) symptoms, Ebola patients require constant medical attention. Patients will not be instructed to return home and “self-isolate,” and will need care from a number of different types of health professionals. In other words, a sudden spike in Ebola cases can be unusually challenging to health care capacity, especially given the threat it poses to medical professionals, even in tightly controlled conditions.

However, it is worth noting that—prior to 2014—Ebola was considered very unlikely to pose a major threat to public health. So while COVID-19 might not pose as immediate a threat to the individual, the exponentially higher number of cases could still overburden health systems.

So when considering “flattening the curve,” this is not just meant to reduce COVID-19 cases, and it is not meant to specifically protect immunocompromised or older family members. As COVID-19 continues to spread, it will lengthen waiting times at ERs, overburden general practitioners with visits and follow-up appointments, increase waits and delay delivery of medication at pharmacies. Potentially life-altering diagnoses will be delayed, and life-saving treatments undelivered. Flattening the curve is not just a goal for COVID, it is a necessity for wider public health.

This discussion is not to take away from the human toll of the Ebola outbreak. However, that outbreak is a dramatic illustration about how different health conditions are not independent of one another, and why we should think beyond the pathogen we hear about in the news.

The state of capacity

Keep in mind that not all countries share similar infrastructures. The US for instance has approximately 2.8 hospital beds per 1000 people. Italy fares a bit better at 3.2 per 1000, but it has been hit especially hard by COVID19, illustrating the severe challenges of an overwhelmed healthcare industry. Others, like Burkina Faso, Mali, and Côte d’Ivoire come in at less than 1 bed per 1000. In terms of the graphic at the top of this post, while the dashed line of state capacity for the United States might actually be quite high, the same line for other countries (or even different states within the US) can be dramatically lower.

For illustration, according to the World Bank’s World Development Indicators, the West African state of Liberia had about .023 physicians per 1000 people prior to the outbreak and .8 beds per 1000 people. These are some of the lowest numbers in the world. In contrast, The United States had around 2.4, or over 100x the rate of physicians. More recent data from the Journal of Medical Regulationreports a slightly higher value of 2.9.  However, former US Surgeon General Vivek Murthy recently emphasized that the strain on the US healthcare system is already visible. Hospitals are reportedly saving their tests for only those that are severely ill, the turnaround time for tests is painstakingly slow (taking several days), and the healthcare professionals that administer tests need to then be quarantined—taking them off the “front lines.” Healthcare workers are also reusing masks when treating patients, far from an ideal situation, but necessary at the moment due to limited stockpiles. Dr. Murthy’s advice, until access to testing increases, mitigation efforts are necessary to flatten the curve—and save lives.