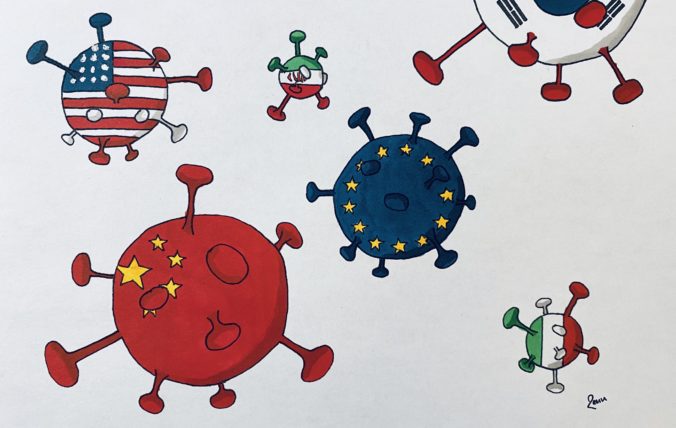 How the Coronavirus is Plaguing Autocracies and Democracies

After weeks of the spiraling transmission of COVID-19, the outbreak has spread from its source in Wuhan, China to nearly 70 locations worldwide. To date, the number of people with confirmed infections of coronavirus has surpassed 100,000, where more than 3,000 have died and over 60,000 have recovered. Mainland China, Italy, South Korea, and Iran remain the hardest hit with confirmed cases in the thousands, but the virus is continuing to spread, and the World Health Organization (WHO) has raised the global alert to the highest level other than calling it a pandemic.

With China witnessing another infectious disease outbreak and the first to be designated as a WHO Public Health Emergency of International Concern (PHEIC), SARS being the outbreak that facilitated the PHEIC system to begin with, there has been much discussion about China’s response given its authoritarian context. This includes how the disruptions might bring into question the effectiveness of authoritarian rule during public health emergencies. It is equally important to consider what the crisis means for democracy. What role does a country’s regime type have in shaping their response to public health emergencies, and in turn, in what ways do these crises threaten the stability of these regimes?

As Joshua Busby and Matthew Kavanaugh explain, China’s lack of transparency obstructed information flows in the early weeks of the outbreak and contributed to the spread of the virus. However, as China began to realize the scope of the problem, the government responded by implementing an unprecedented cordon sanitaire and travel restrictions in January, along with a number of other heavy-handed policies. Such measures have raised concerns about human rights violations and could also increase the likelihood of unrest as people become dissatisfied with the government’s overbearing and opaque response.

Nonetheless, there are some indications that China has slowed the virus’s spread, and in recent weeks the efforts of the Chinese government have been lauded by powerful players in the international arena and disease diplomacy for their efforts in containing the pathogen. The director-general of the WHO, Tedros Adhanom Ghebreyesus, declared at the end of January that “the Chinese government is to be congratulated for the extraordinary measures it has taken to contain the outbreak, despite the severe social and economic impact those measures are having on the Chinese people.” He further asserted that these actions were “setting a new standard for outbreak response.” Meanwhile, the executive director of the WHO’s Health Emergencies Programme, Michael Ryan, stated that the Chinese government’s aggressive steps to protect its citizens is “the ultimate social contract between any government and its people.”

These statements overlook how China’s authoritarianism likely contributed to the rapid spread of the disease, as well as justified concerns about human rights. At the same time, it probably is the case that the government’s ability to implement and enforce draconian policies quickly may provide some benefits for beating the virus back.

Italy: Democracy Put to the Test

Democracies face a different set of challenges under the strain of a public health emergency. While their institutions are more transparent, it can be trickier to implement the heavy-handed government responses that may be needed to combat a major public health emergency. An authoritarian government faces relatively few constraints when seeking to impose such extensive and rapid controls, but a democratic government could be called into question for limiting both individual and collective freedoms. Further, even if a democracy does take these steps, it may struggle to enforce them effectively. Current events in Italy exemplify this challenge.

Outside of China, Italy has implemented the most stringent restrictions with regard to the spreading coronavirus outbreak. Italy also has the world’s second largest prevalence rate of COVID-19. Initially in January, both the leader of the Italian far-right League Party, Matteo Salvini, and respected virologist Roberto Burioni called for the quarantining of travelers from China to contain the outbreak, though for different reasons. Nonetheless, the response was similar. The former was criticized because of his extreme views, and the latter was dismissed for potentially sympathizing with them. After this delay, however, the Italian government cancelled all direct flights to and from China in late January. Following a sharp uptick of COVID-19 cases over the weekend, the government has taken even more drastic measures similar to those in China: it quarantined nearly a quarter of Italy’s population in Lombardy and 14 provinces and then extended the lockdown to all of Italy on Monday.

Additional measures include controls at stations to check temperatures, a ban on all public gatherings from weddings and funerals to sporting or religious events, and the use of restaurants and bars between only 6am and 6pm if a three-foot space between each patron can be guaranteed. In announcing the government’s policies, Prime Minister Conte has urged his citizens to stay home for the health and protection of Italy. However, these policies already appear to be facing major questions. Communication from the government has been plagued by continuous leaks to the press, and there is significant ambiguity as to whether and by whom these draconian policies will be enforced.

The European Union: Democratic Principles and Institutions Under Strain

With 27 member states, each of which has an independent infrastructure for health policy, the European Union (EU) overall also provides an important test case within which to examine these issues in the context of coordination among multiple democracies. As a regulatory superpower, it already imposes a number of standards including those across trade, monetary policy, consumer protection, the environment, the single market, and even public health. In theory, the EU provides an ideal institution by which to optimize a coordinated response to a public health emergency, and in so doing provides an example for how coordination worldwide could succeed or fail.

The EU also has already been engaged in a number of global and public health efforts. Nevertheless, EU Member States are still predominantly responsible for public health policy and services in their jurisdictions. Both the Maastricht Treaty of 1992 and the Amsterdam Treaty of 1997 set the tone for and scope of the EU in health policy by emphasizing the fostering and funding of cooperation between member states and later cooperation with them to improve public health. However, there have always been strong restrictions against passing any laws to harmonize public health measures among all of the countries involved, thus preserving a powerful role for the bloc’s individual states.

Nevertheless, the European Commission does play an important role in cross-border issues, which includes health security concerns. The EU is a member of the Global Health Security Initiative that serves as an informal, international partnership among countries regarding public health emergency preparedness, and around one-third of EU member states are part of the Global Health Security Agenda.

With regard to COVID-19 specifically, the EU is coordinating preparedness and response measures among member states under the Cross-border Health Threat Decision, supporting a number of agencies that provide technical guidance, providing €232 million of funding for various aspects of prevention and response, offering some support to China, and funding ongoing research. What allows the EU to play this role is the transparency that comes with the democratic governance of its member states, along with the shared values that facilitate cooperation across borders.

At the same time, the coronavirus is testing the EU and its underlying institutions by empowering populist political actors. As COVID-19 continues to spread across the continent, it has allowed populists to question the borderless Schengen area of Europe that allows for freedom of movement and that is fundamental to the EU’s identity. While the temporary reintroduction of borders is allowed under certain conditions including terrorism or health emergencies, an increasingly vocal far right is pushing to abandon the 1985 Schengen Agreement altogether. The far-right movements in Europe began to gain power with the recent refugee crisis, which also led to the questioning of a borderless Europe when member states could not come to an agreement on their immigration policies. Anti-EU European populists now seem to be using the coronavirus as a tool to further push forward their agenda to tighten borders and stir up fear against foreigners and minorities.

For instance, Italian Matteo Salvini, has stated that, “The infection is spreading. I want to know from the government who has come in and gone out. We have to seal our borders now.” In addition, he continues to blame the arrival of refugees and migrants as the source of the spread of COVID-19 in a further attempt to promote closed borders and anti-EU sentiment. Right-wing nationalist Marine Le Pen has called for the French borders to be closed with Italy. And even in Switzerland – a country that enjoys the border-free zone with the EU but is not a member of it – Lorenzo Quadri of the right-wing Lega dei Ticinesi stated that it he was alarmed that the EU is prioritizing “the dogma of wide-open borders.”

As such, core tenets of the EU are coming under attack with the spread of the coronavirus, which is being framed as a reason for greater isolationism and populism by far-right leaders. Similar dynamics played out in the United States even with the Ebola outbreak in 2014, and they have started to emerge as the coronavirus crisis hits as well. Further, beyond the threat of populism, even governments themselves are turning inwards in looking to protect their own citizens as seen in the withholding of medical supplies by France and Germany from their fellow member states. As such, the EU might benefit from considering greater coordination and harmonization mechanisms in public health policy going forward.

In dealing with such public health emergencies, autocracies may have some advantage in halting the spread of a contagion because of their ability to implement a heavy-handed response quickly. Yet, this approach generates key disadvantages through its obstruction of information and its undermining of public trust at a moment when the authorities need it most. Similar information problems to China have occurred in Iran, and Egyptians are reportedly highly distrustful of their government’s denials that the virus is spreading in Egypt.

Meanwhile, democracies typically have an advantage in developing transparent and trusted responses that can also be coordinated across multiple jurisdictions, as in the EU. While democratic values are a source of strength in this sense, they also create two particular vulnerabilities to outbreaks. First, the government may find it difficult to enforce drastic measures that appear to contradict these values, even when such measures become necessary to fight diseases effectively. Second, democratic freedoms can be used by political actors who see in such crises an opportunity to attack democratic institutions and norms.

COVID-19 containment with style: A first-hand account of the virus containment efforts in Italy