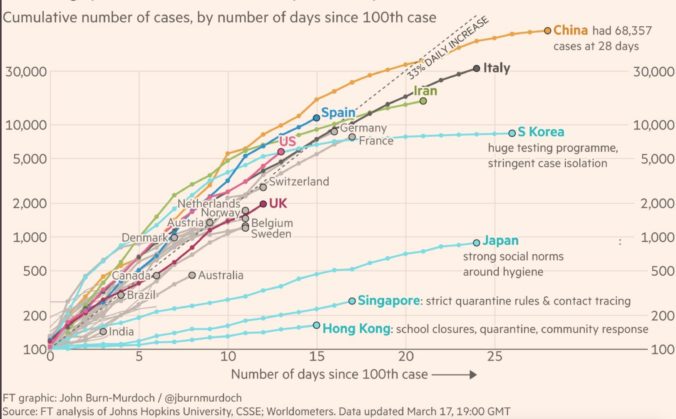 This is a guest post from Sofia Fenner, an Assistant Professor of Political Science at Bryn Mawr College. Her research explores co-optation under authoritarianism, with a regional focus on the Middle East and North Africa.

Much like the fall of the Soviet Union or the onset of the Arab Spring, the global coronavirus pandemic offers us intriguing variation: as diverse polities confront similar shocks, we see striking differences in how (and how well) different countries respond.

Though we are only a few months into the outbreak, we have already seen success stories in some countries—mitigated or even contained outbreaks—and horrifying failures in others: health systems overwhelmed, death tolls spiking, drastic measures seeming to fall short.

What explains this variation? Initial accounts have focused overwhelmingly on regime type, asking how democratic and authoritarian systems differ in their responses to a novel disease outbreak. But regime type is just one of several fundamental comparative politics variables that might determine the success of a pandemic response. I offer a preliminary exploration of how several key variables—regime type, yes, but also state capacity, leadership response, and societal buy-in—map onto the responses we have seen to date.

By establishing baseline expectations using the cases we have already observed, we will be better prepared to assess how well other countries—especially those that currently have few or no cases—will respond to full-blown outbreaks. We may also be able to identify outliers: countries that over- or under-perform their fundamentals, so to speak. Identifying over-performing cases may point us to practices, choices, or interventions that could be applied in other contexts. If journalism is the first draft of history, analyses like this are only barely second drafts: big, broad, necessarily impressionistic. My goal here is to sketch out potential interventions among major variables as a way of opening up a broader conversation.

For the purposes of this exercise, I identified four key variables:

Regime type refers to the rules regulating access to political power. I work here with a binary authoritarian/democratic distinction, assuming authoritarian regimes to have fewer veto points (Iran may be an exception), greater pre-existing authority to regulate social life, greater control over media, and less transparency.

State capacity is the infrastructural apparatus available to rulers to implement their policies, including both the physical infrastructure of the state and the quality, professionalism, and experience of state employees. Nationalized schools and nationalized health care systems contribute to higher state capacity, along with better roads, better-resourced public health authorities, a more effective postal service, etc. The size and capacity of military forces also counts toward state capacity, and we have seen military forces mobilized in several countries to respond to the pandemic.

Meaningful federalism and decentralization decrease central state capacity, which is one reason why the United States ranks relatively low on this metric. While certain sub-state units could have higher or lower capacity, we are concerned here with the national-level response. I use a binary high/low measure for state capacity, although—as with regime type—a continuous measure would be preferable.

Leadership response measures the extent to which political leaders took the outbreak seriously from its early emergence and directed the state apparatus to address it. This variable specifically concerns the government—the individuals or parties in positions of power—as distinct from regime type.

Societal buy-in acknowledges the role that societies play in disease spread (and, more broadly, in determining the ultimate effectiveness of any state intervention). For the moment, it is a measure of the extent to which people seem to be complying with government-ordered social distancing recommendations (and, in the absence of such recommendations, whether people implement social distancing on their own).

Putting these variables together produces the following chart of varying response outcomes:

1. The best outcomes so far come from higher-capacity states, regardless of regime type.

This is not surprising: high state capacity gives rulers more tools to confront all crises, including epidemiological ones. Robust infrastructure facilitates rapid response and gives leaders tools they can repurpose for public health purposes (to take a somewhat concerning example, consider Israel’s repurposing of surveillance tools for epidemiological contact tracing).

Many of the high-capacity East Asian cases also benefitted from recent experience dealing with SARS and H1N1; they have had opportunities to develop state capacities specifically suited to this kind of crisis. That bodes well for some otherwise low-capacity African states that have developed procedures to combat HIV, Ebola, and other infectious diseases.

2. The best outcomes are also found in cases with timely and proactive leadership responses.

We do not yet know how much proactive leadership can do with a weak state, but the Italian example shows that a delayed response can put even a decently capable state in serious trouble. Italy’s system of universal health coverage and low-cost access may have helped, but it did not save the country from becoming the disease’s second epicenter. It seems to be the case that, at least for pandemics, the machinery of state must be put into action; it cannot be relied upon to simply act on its own (as Foucauldian scholars show us it does in many other situations).

This poses a problem for comparativists, who generally prefer to theorize the structural features of societies, states, and economies rather than the choices of individual leaders. Of course, it may well turn out that deeper forces are at work in driving leadership responses. When we look more closely at the actions of leaders who downplayed the risks of COVID-19, we may find that they were in close re-election battles, suffered from comprehensive information problems that made judging the situation difficult, or had prior antagonistic relationships with their own state apparatuses.

When I shared a version of this chart with Dan Slater at the University of Michigan, his first response was, “so does regime type matter at all?” As a scholar of regimes, I am predisposed to think that it does, but he has a point. Both authoritarian and democratic regimes can fail or succeed at pandemic response (the same is true of most major socio-political projects, from dam-building to literacy promotion).

Authoritarian information problems (first diagnosed in Ronald Wintrobe’s 1998 The Political Economy of Dictatorship) are the key concern here. In authoritarian regimes, both rulers and citizens systematically lack reliable information, hampering their ability to make the correct decisions. Such information problems clearly played a role in the initial genesis of a major outbreak in China. The state’s initial response, to silence Dr. Li Wenliang and other medical professionals who reported the novel virus, squandered valuable time and deprived citizens of opportunities to protect themselves. Dr. Li died a hero several weeks later, but by then the outbreak had reached truly massive proportions.

China, however, is an exceptional case: surely governments will be better at taking an outbreak seriously when it has already proved devastating elsewhere. China, Iran, and Italy had the bad luck to be hit first, and democratic Italy has proved little better at tackling the problem than authoritarian Iran—although, again, we may not know the full extent of the Iranian outbreak.

Authoritarianism may also matter when it comes to social buy-in: if a regime has already established pathways for forcing or otherwise inducing people to do what it wants, getting citizens to comply with social distancing protocols will be easier. But—as the everyday heroism of healthcare workers in China and elsewhere shows—proactive societies may well be able to fill some part of the gap left by an inattentive government or a rickety state.

The above chart also comes with two important caveats.

First, I have sorted responses based on their effectiveness at either containing or mitigating an outbreak. Most of us, however, would agree that more goes into a “good” response than just efficacy; respect for human rights, equity, and the environment surely matter too. Right now, it seems difficult to focus on anything other than death tolls and case counts, but there is variation on these other fronts as well. In the coming months, brave people will document violations and inequities perpetrated in the name of saving lives; if for no other reason than data availability, social scientists should be among the first to defend them.

The second caveat is that there is much we still do not know. Many of the possible pathways on this chart have not yet been filled. We don’t know much about what happens in low-capacity democracies with rapid leadership responses, nor about what happens in low-capacity authoritarian regimes, regardless of leadership quality. We lack comparative leverage on the exact role social buy-in can play, or the extent to which it varies independently of government response (if leadership clearly and strongly encourages social distancing, are people more likely to adopt it?).

This is only a preliminary foray, an attempt to spark conversation rather than provide definitive answers. The variables considered here may turn out to matter differently at different points in time; they may be proxies for other, deeper causal forces; they may co-vary (indeed, some of them almost certainly do); they may be irrelevant. Experts on individual countries and on the specific infrastructure and political actors involved will have much more to say, and we should listen closely. Epidemiologists and public health specialists can help us reckon with the clear but tricky role of time in all of this. Impressive interdisciplinary work already exists on disaster response and we should consult and build upon it.

Variation intrigues everyone, not just scholars of comparative politics. As people around the world start to develop their own accounts of why different countries have responded differently, we should be active participants in the conversation, offering concepts and prior experience, listening carefully, and working with interlocutors to develop better questions and sharper critiques.

COVID-19 and the Start of a Global Recession