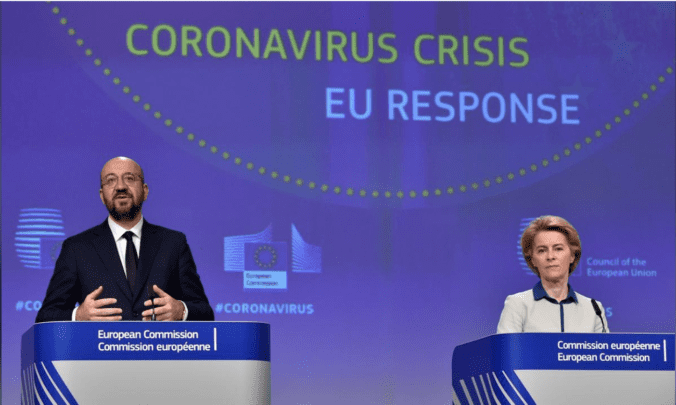 This is a guest post from Sean D. Ehrlich, an Associate Professor of Political Science at Florida State University who researches international and comparative political economy, trade policy, and democratic institutions. His first book, Access Points, was published by Oxford University Press in 2011 and  his second book, The Politics of Fair Trade, was published by Oxford University Press in 2018. He can be found on Twitter @SeanDEhrlich.

As the coronavirus pandemic continues to rage across the European Union, the EU itself has been relatively inactive, leaving it up to the member states to address the medical crisis and its economic and social consequences. Largely, this is by design, as public health issues were intentionally left to national discretion.

Where the EU has taken action, it has been limited and technocratic such as pooling money for joint ventilator purchases and funding vaccine research cross-nationally. The one exception has been the European Central Bank, which has taken major steps by injecting over €750 billion into the economy through quantitative easing to support the region’s economies.

Otherwise, what the EU has not done is offer any European-wide fiscal stimulus or aid for countries that implement their own policies. While the EU does not have ready mechanisms to do much of this, they do have tools like the European Stabilization Mechanism (ESM) to lend money to countries that have increasing debt which was developed to address the Eurozone sovereign debt crisis that started in 2008. However, though negotiations are ongoing and a preliminary deal has been struck, the members of the EU have yet to agree on a final plan to use the ESM.

The main reason the EU has yet to really respond to the pandemic is the fundamental divide between states that prefer disciplined fiscal and monetary policy and states that prefer less disciplined policies. This is the same divide, with many of the same countries involved, as in the Eurozone crisis, and the debate is following the same process in accelerated fashion. Italy and Spain, the two hardest hit EU countries, also were among those most affected by the prior crisis while Germany was the main country, then and now, resisting bailouts and generous loan terms, albeit this time with the Netherlands being even more hardline than Germany.

Spain and Italy have been asking for help for weeks to limited avail. On April 5, Spanish Prime Minister Pedro Sanchez wrote about the need for a new Marshall Plan to help countries going into debt. Sanchez said that not doing so would mean that “the credibility of the European project will be severely damaged” and “Europe itself is at stake.”

This plea came amidst stalled negotiations over a European response where Italy and Spain were demanding monetary help primarily through Eurobonds, which are shared debt instruments that Spain and Italy would be responsible for paying off but that would be backed by all Eurozone countries. If Spain or Italy were unable to pay, other Eurozone countries would have to pay or else risk their own credit rating. This would enable Spain and Italy to obtain better terms and would demonstrate fiscal solidarity.

Germany and the Netherlands opposed Eurobonds and preferred to use the ESM with the Netherlands wanting to offer these loans only on condition that the recipients make fiscal reforms. Under pressure, the Netherlands dropped these demands, allowing a preliminary deal to be reached on a €500 billion package mostly made up of unconditional ESM loans.

This is a close repeat of the debates during the Eurozone crisis. In that instance, creditor countries insisted that debtor countries enact austerity in return for loans while the creditor countries wanted Eurobonds and loan forgiveness. (Jeff Frieden and Stefanie Walter provide a thorough and readable overview on the Eurozone crisis and the political science literature that discusses it). In the current crisis, though, the calls for austerity conditions placed on loans are even more problematic. During the Eurozone crisis, it was at least plausible to argue that poor economic policies in Greece and elsewhere were responsible for the crisis in those countries and so any loans given out had to be matched with changes to those policies to make sure that similar crises did not re-emerge.

But with the pandemic, it is obvious that Italy’s and Spain’s economic policies did not cause them to have the worst outbreaks. Forcing them to pursue austerity policies would be pointless as these debts they are taking on are not the result of the macroeconomic conditions or policies in the country. There should be no reason to expect that if Italy and Spain kept their pre-pandemic policies that they would go into debt again. The Dutch insistence on austerity conditions is thus harder to understand and harder to defend than German austerity demands in the preceding crisis.

This might explain why the framework for an agreement that was reached on April 9 included that ESM funds would be distributed without immediate conditions. However, questions remain about what happens when the pandemic is over and countries need to pay back the ESM loans: will the strict rules about fiscal discipline return? Will Germany and the Netherlands insist on tax increases and spending cuts so that debtor countries can pay back the loans without running large annual deficits? That the funding comes in the form of loans rather than Eurobonds or fiscal transfers means issues of how to pay for the pandemic response in Southern Europe are only delayed not resolved.

Why the Déjà Vu?

Why have we seen a repeat of the Eurozone crisis in this coronavirus crisis? Fundamentally, it is because the divisions exposed by the earlier crisis still exist and the institutional architecture of the EU has not changed. There are still wide differences in the wealth of the countries in the EU as well as their macroeconomic policies. Some countries like Germany, the Netherlands, and other wealthier Northern European countries prefer more disciplined fiscal policies to keep inflation in check while other countries, such as France and many Southern European countries, prefer looser policies that lead to more economic growth.

In addition, failure to create a fiscal union after the Eurozone crisis limits the ability of the EU to use budgetary policies to help countries fighting the Pandemic. As a result, we continue to see an economic union that has shared monetary and trade policies, but different fiscal policies which will only lead to continued conflict with each economic crisis as part of a common dynamic of ‘failing forward’ described by Erik Jones, R. Daniel Kelemen, and Sophie Meunier.

What are the likely results of this current EU crisis? A lot depends on how long the economies of Europe are shut down and what policies the EU implements over the course of the pandemic. But PM Sanchez is correct that the credibility and perhaps the future of the EU is at stake. The handling of the Eurozone crisis led to calls for Greece to leave the Euro or even the EU, contributed to the wave of antiestablishment and extremist support throughout the EU, and maybe partially contributed to Brexit. The response to coronavirus has the potential to lead to much worse.

The Future of the EU after Coronavirus?

In addition to the Spanish Prime Minister’s statements about the future of Europe, discontent with the EU has also been apparent in Italy. Prime Minister Comte has said Italy won’t use the ESM funds as Italy is still pushing for Eurobonds instead. This is particularly problematic given existing skepticism about the EU in many countries. In ongoing research on opinions about Brexit in other EU countries coauthored with J. Barnabas Lee, we find fairly high support in many countries for respondents’ own countries leaving the EU. Italy had the second highest support for leaving the EU in the 2018 Eurobarometer with over 30% of respondents who expressed an opinion preferring to leave the EU. While this is short of a majority necessary for exit, it shows significant underlying discontent with the EU.

Spain was significantly more supportive of the EU with only 12% of respondents supporting leaving the EU in 2018. The other countries where more than 25% of respondents expressed support for leaving the EU (Austria, Croatia, Cyprus, Finland, and Greece) have been less affected by coronavirus so far but, Greece and Cyprus remember the Eurozone crisis and opposition may increase if rich countries continue not to bail out struggling countries. Even if countries do not leave the EU, more Euroskeptical parties might win elections, slowing down or altering continued cooperation within the EU, as President Emanuel Macron of France warned, arguing that if the EU does not implement a program that shares the financial burden of the pandemic response then the Eurozone and even the EU could collapse as “the populists will win — today, tomorrow, the day after, in Italy, in Spain, perhaps in France and elsewhere” adding that “you cannot have a single market where some are sacrificed.”

The EU still has time to avoid these dire outcomes. The current bailout fund does not preclude additional future bailouts so Dutch and German opposition to Eurobonds can still be overcome. It’s also possible that future repayment of ESM loans will not be accompanied by conditions or that the Italian and Spanish economies will bounce back strong enough that they can easily repay the loans. However, regardless of final outcome, the coronavirus shows that when it comes to fiscal policies, the EU remains as divided as it was a decade ago. The European Union has not learned the lessons of the Eurozone crisis and it running out of time to do so.

Responses to COVID-19 in South Africa: The centrality of food security