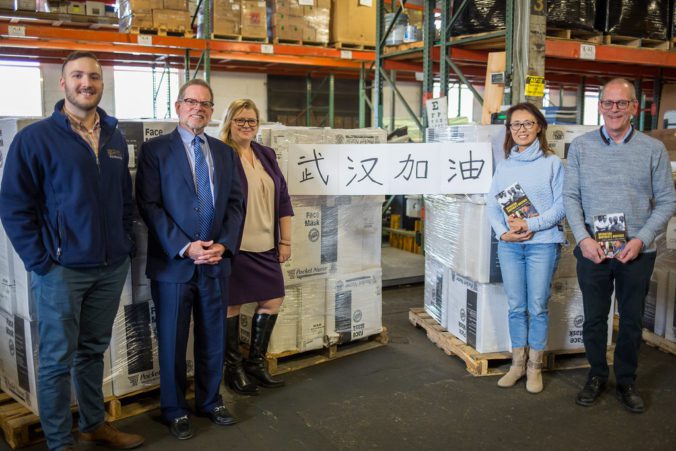 This is a guest post from Jiun Bang, PhD (University of Southern California, political science and international relations), currently a visiting scholar at the Korean Studies Institute at USC.

In the midst of the coronavirus outbreak, cities have been making the news, from the harrowing daily struggles of New York City with COVID-19 to President Trump’s erroneous estimate of Seoul’s population of ‘38 million’ [more like just shy of 10 million].  I happened to listen to Dr. Robert T. Yanagisawa, MD and Professor of Medicine at the Icahn School of Medicine at Mount Sinai and Co-Director of the Mount Sinai Global Health Program in Japan, talk about the bond between New York City and Tohoku (Japan) based on the ‘9/11 to 3/11 Survivor Exchange Program,’ which references the attacks of September 11, 2011 and the Fukushima disaster of March 11, 2011.  According to Dr. Yanagisawa, there are plans by Japanese medical students to send N95 medical masks to Mount Sinai hospital in New York.

All this got me thinking about the concept of paradiplomacy: diplomacy by sub-state political units, including cities. As a big fan of diplomacy and one who often laments the lack of appreciation for both the practice and discourse of diplomacy by mainstream IR, I thought I would introduce paradiplomacy—especially between cities—and its potential applications for the ongoing COVID-19 pandemic.

To be clear, the nomenclature of ‘paradiplomacy’ is not tension-free. One of the early scholars to identify and label the practice of diplomacy between non-central governments was Ivo Duchachek, who saw the state as a multivocal actor and the sub-national imprint in international affairs to be a long-lasting one. (I should mention that Duchachek had also used ‘microdiplomacy,’ which soon morphed into paradiplomacy. See Kuznetsov for more details.)

Since then, others like Brian Hocking have preferred the term ‘multi-layered diplomacy,’ to emphasize the network of relationships over the more compartmentalized processes (and implicit conflict) that are transposed to the image of parallel diplomacy, the long form of paradiplomacy. There are also actor-specific terms such as ‘city diplomacy,’ which according to Rogier van der Pluijm and Jan Melissen, is “a form of decentralization of international relations’ management, choosing cities as the key actors.”

While my own preference for paradiplomacy in the title was strongly dictated by the alliteration that it created with ‘pandemics,’ I opted to use the umbrella term of paradiplomacy to prevent an implicit reduction in scale that may come with the label of cities, particularly as some cities actually boast a greater population than entire countries. (An impressive organization to which New York City, Seoul, and Beijing are all part, is the C40, a network of megacities committed to addressing climate change.)

One institutional element that I think has played a role in facilitating greater paradiplomacy by cities is the program of ‘sister cities’; since I would rather be fastidious than lazy with nomenclature, I should point out that ‘sister cities’ is just one particular term that has gained traction among several others (i.e. twin towns, twin cities etc.). In a non-Anglophone context like Northeast Asia—which is my own area of interest—sister city seems to be the common choice (‘jamae doshi’ in Korean and ‘shimai toshi’ in Japanese) so I will stick with this for now.

In the case of the U.S., the history of sister cities can be traced back to Sister Cities International (SCI), which was created at President Dwight Eisenhower’s 1956 White House conference on citizen diplomacy. According to the SCI website, it has 1,800 partnerships with 138 countries (incidentally, California has the most partnerships with 356). Among many intriguing factoids about the SCI, there is what is called a ‘city connection marketplace’ that serves as a kind of ‘match-making’ place for cities wanting relationships with other cities. (Maybe one day, a budding graduate student will take up Mercer’s ideas on ‘feeling like a state’ but at the city-level.)

In fact, predating the SCI by one year is the Saint Paul-Nagaski Sister City Committee (SPNSCC), the first U.S. city partnership with an Asian city. One of the first programs by the SPNSCC was to send medical supplies to Nagasaki, which was still recovering from the atomic bombing of 1945. This brings me to the ongoing COVID-19 pandemic and the instrumental value of sister cities (and paradiplomacy in general).

In essence, sister cities are meant to be above politics. Beneath all the Soviet-U.S. antagonism during the Cold War, there was considerable interest at the city-level to promote sister city relationships between the two countries: there was some kerfuffle in early March after the New York Times reported in length on the efforts by presidential hopeful Bernie Sanders during his time as mayor of Burlington, Vermont, to establish a sister city arrangement with Yaroslavl in the Soviet Union in 1988. (The Washington Post also published its own piece clarifying the ‘usual’ nature of the sister city practice during those times.)

Of course, just as that debate challenged the apolitical ideal of sister city relationships, state-level politics often have a way of trickling down. One contemporary example that comes to mind is when Osaka dropped San Francisco in 2018 over the latter’s hosting of a ‘comfort women’ statue after 60 years of sister city relations (there is a good article about that here). (‘Comfort women’ refer to victims of sexual slavery by Japanese soldiers during World War II). Still, it is hard to think that after years of goodwill and friendship, an entire relationship could unravel from one decision alone; since then, there have been activities between the two cities as advertised by the San Francisco-Osaka Sister City Association. As political scientists, many of us believe in the idea of ‘institutional stickiness,’ and I see the same thing happening here—it is much harder to dismantle the human infrastructure that operationalizes the concept of sister cities than it is to quash the concept.

How Can Sister Cities Be Mobilized During COVID-19?

With this in mind, I want to think that there is a lot of promise for what cities can do in terms of paradiplomacy during this pandemic, especially since the institutional linkages are clearly already there. Even South Korea, which has become somewhat of a ‘model’ case for its response to COVID-19, has seen instances of paradiplomacy: Donghae-si in Gangwon province has received hand sanitizers from its sister city of Tumen (in China’s eastern Jilin province), while Busan in the southern part of the Korean peninsula has received masks from its sister city of Shanghai. While some have described China’s efforts to send masks abroad as ‘face-mask diplomacy,’ the instances of Sino-Korea sister city cooperation are clearly part of paradiplomacy. Amidst ongoing country-specific acrimony and racism, cities also have the advantage of creating less public backlash—partly due to the reality that local stories rarely make national headlines but also partly due to another unfortunate reality that people in general tend to be more familiar with countries than cities.

Just a couple days ago, Fort Wayne in Indiana confirmed that it had received a shipment of masks from its sister city of Taizhou, located on China’s eastern province of Zhejiang. Conversely, the U.S. city of Pittsburgh had sent masks back in February to its sister city of Wuhan; to quote one of the organizers behind the shipment, “having a sister city is like any other close friendship. You share each other’s triumphs and tragedies.” Even earlier in January, there was a fundraising effort on the GoFundMe platform by the Pittsburgh Chinese community to send medical supplies to Wuhan. (The campaign raised a total of $58,888.)

As I write this, New York City remains an epicenter for COVID-19 in the U.S., with over 5,000 confirmed deaths. Here is to hoping that paradiplomacy may provide a supplementary track for NYC’s much-needed medical supplies and equipment.