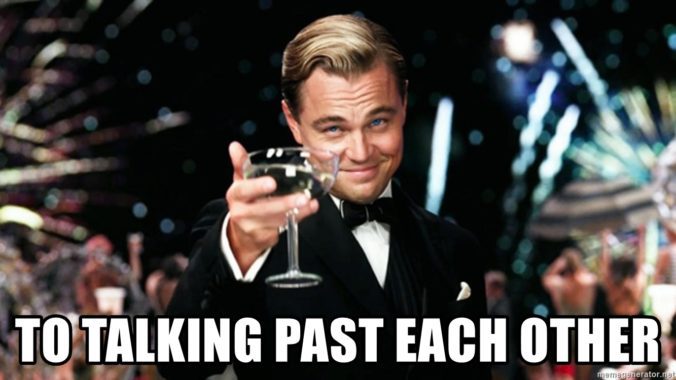 It isn’t just about Wæver and Buzan

In case you missed it, quite the IR controversy has broken out. In August 2019, Alison Howell and Melanie Richter-Montpetit (hereafter H&RM) published “Is securitization theory racist? Civilizationism, methodological whiteness, and antiblack thought in the Copenhagen School” in Security Dialogue (SD) OnlineFirst. The authors conclude, after a tendentious (my assessment) reading of Security: A New Framework for Analysis(1998) and Regions and Powers (2003) that securitization theory is fundamentally racist and, deemed unsalvageable, should be ejected from security studies—and this would include the word securitization.

Lene Hansen, whom H&RM criticize for failing to unearth securitization theory’s racist foundations and who they argue engages an ‘Orientalist imaginary’ in her seminal Little Mermaid article, published a peer reviewed response in SD to H&RM’s paragraph long critique in March 2020. Ole Wæver and Barry Buzan (hereafter W&B), the primary focus of H&RM’s critique, published their peer-reviewed response in SD in May 2020, accompanied by a Twitter thread by Wæver, as well as a 98-page exegesis expanding on their SD response. I have been fairly vocal on Twitter arguing against the merits of the H&RM article, as well as pushing back on some of the condemnation of Ole Wæver (Buzan is not on Twitter). Alongside Nawal Mustafa and Robbie Shilliam, I was also on the Nexon/PTJ hit podcast Whiskey and IR Theory.

A quick sidebar: to put things crudely, the ‘debate’ seems to have crystalized around two camps: pro-H&RM/ anti-W&B (I have seen a few anti-securitization comments, but that seems to be a small number) and the obverse. There are a lot of difficulties with this characterization. One obvious one is that the participants are not mirror images. While it appears to be mostly academics in the H&RM camp, the other ‘side’ has been infiltrated by a range of non-academics—fascists, racists, misogynists, and general misanthropes. My thoughts here do not concern them. They should crawl back into their cesspits.

The general agenda into which the H&RM article falls is a valorous one, one that should occupy a greater place in IR. Much of the discussion, however, has not been about race but rather an obsessive focus on the transgressions—real or imagined—by Wæver and Buzan. This is leading the security studies community to overlook the very real possibility of professional and intellectual damage to both junior and senior scholars who use securitization theory arising from the maximalist, radical conclusions of the H&RM article.

What gives rise to these anxieties and dilemmas? A central problem lies in the agenda set by H&RM: the discussion started at a radicalized extreme in which an entire research program was labeled racist and irredeemable. This absolutist conclusion resembles nothing so much as contemporary socio-political polemics. In any case, it creates a Manichaean premise in which nuance, conversation, interrogation, and inquiry—the essential operational code of IR—are eliminated. The problem is that the debate started where there was no middle ground to be had, no point at which self-reflection and critical self-assessment could take place. It was foreclosed by H&RM’s maximalist conclusions (which, to be clear, I do not think are supported—but that is another post). And now what do we tell those junior scholars who are hoping to publish using securitization theory? What do we tell the editors who might be concerned that they will be accused of aiding and abetting a racist theory?

I think most IR scholars agree that all theories developed anywhere are reflective of their cultural and sociological priors. That means we should always be looking for the gaps, the silences, the absences, in what those theories see in the world. Does securitization theory need to be critically interrogated along these lines, and reformulated where necessary? Unquestionably, yes. Does that general meritorious agenda allow us to overlook H&RM’s poor execution?1

Some argue yes, but many commentators seem to skip over this question—noting in passing ‘problems’, ‘reservations’, or the like with the H&RM article but rarely going further. My concern is that the condemnation of an entire research program, much of which has been used to explore those very issues of race by non-western scholars, without a discussion on the merits of the argument and conclusion harms a great many more people and the intellectual enterprise of IR and security studies.

A less invested observer might point out that the original H&RM as well as the responses by Hansen and W&B all appeared in the same journal and all have the imprimatur of peer review, so it all comes out in the wash. But the intensity of the controversy suggests that is not the case. The claim of racism is, rightfully, a powerful one. The credible claims of racism did much to sink Huntington’s clash of civilizations thesis. Here, the stakes are even larger: an entire research program is at risk of being understood as so racist that it must be excised from security studies.

Supporters of securitization theory see that peril coming from a deeply flawed piece of scholarship that seems to be getting a pass on substance and are seeking to draw attention to that reality. Perhaps owing to the animus directed at Ole Wæver, there seems to be almost no discussion of the disciplinary implications of this moment. If we can say supporters of securitization theory are focused on the intellectual issues at stake rather than the process and politics of debate, it is because there are very real scholarly consequences here and they are seeking to challenge what they feel is an unjustified and extreme conclusion about a research program that has born tremendous fruit in security studies and has the promise to continue to bear even richer fruit in the future. Put another way (one that resonates with the furor perhaps), they are hoping to keep those voices that seek to use securitization theory to expand our knowledge and understanding of security practices in the world from being silenced.

*I rarely peer-review my Duck posts. In this case, I asked several colleagues to read and comment, which they did to great effect. I am incredibly grateful to them, though in this current environment I shall refrain from naming them.

1 It is worth noting that H&RM cite Patricia Owens’ critical assessment of Hannah Arendt’s work and the role of racism therein. Even in her damning indictment of Arendt’s racism, Owens stops well short of concluding that Arendt’s work is irredeemable.

“We are not okay. And you shouldn’t be either.”