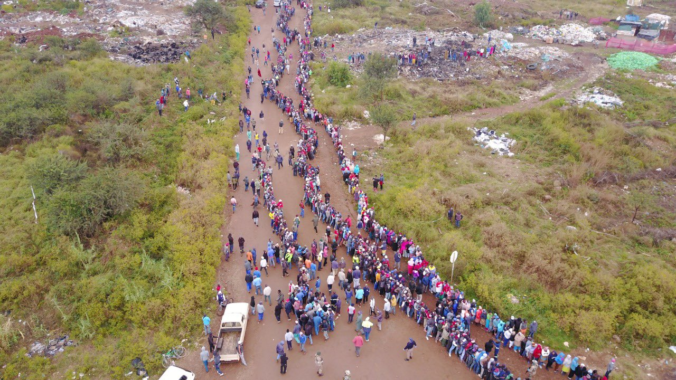 Responses to COVID-19 in South Africa: The centrality of food security

This is a guest post from Kurt Ackermann, a civil society leader in South Africa who works through urban social agriculture to strengthen community resilience in cities. He is executive manager and co-founder of The SA Urban Food & Farming Trust and an associate at the Global Risk Governance Programme at the University of Cape Town.

COVID-19 in South Africa has followed a trajectory atypical of any other nation. For speculated but still uncertain reasons the country managed to flatten its curve dramatically, with one of the world’s strictest lockdowns likely to have played a major role. This included no freedom of movement for exercise, no sales of alcohol, cigarettes or hot prepared food, a ban on travel for funerals, a requirement for all businesses to register and be approved for a permit to operate as an essential service, police roadblocks checking for permits and the illicit transport of unauthorised goods, and more. The disease continues to spread, but slowly and without throwing the nation’s health care system into crisis.

However, the slowed course of the pandemic and severity of the lockdown have amplified pre-existing stresses arising primarily from the staggering level of inequality that has, in fact, worsened since the end of apartheid 26 years ago. Most prominent among these stresses has been a crisis of hunger.

Before the pandemic the levels of food insecurity were exceedingly high, with 20% of the population nationally having inadequate or severe lack of access to food, a situation that is worse in urban areas where some two-thirds of the population now resides. This is exacerbated by malnutrition and diet-related non-communicable diseases that have become widespread. When people can eat, they are not eating well, as is reflected in their health. That the nation has one of the world’s highest rates of infant stunting given these circumstances should not come as a surprise.

The Lockdown and its discontents

With the government’s response to the pandemic coming in the form of a severe lockdown, the economy has been effectively shuttered and the financial stresses on households increased, particularly on those who had some access to an earned income through wage labour, casual piece-work, or self-employment in the informal economy (this against an official unemployment level of 29%, unofficially estimated at 38.5%).

Schools were closed, and this meant the school feeding schemes that provide 9 million children with a meal daily during the week, and that enabled households to spend their money on other essentials, were also closed. Residents were ordered to stay at home and observe social distancing, but in townships, informal settlements and other under-resourced communities where high-density living is a fact of life and 5 or 6 people sharing one backyard room in a shack adjacent to other shacks is not unusual, what was barely survivable under previous circumstances has become unliveable, and compliance all but impossible.

The response to non-compliance from the state has been heavy-handed and militarised, with over 70 000 troops deployed to help police enforce the state of emergency regulations, mainly in poor urban areas. Some revisions by government to restrictions on food sales allowed small shops (‘spazas’) and informal food traders to re-open with certain limitations, but a ban on sales of alcohol or cigarettes (nationwide) has meant much lower income for shop owners and no small level of anger among their customers.

And with many residents required to carry a signed document with them specifying the purpose of their being out on the streets, the echoes of notorious apartheid pass laws are obvious and defiance in poor communities, while not overtly anti-government or political in nature at this point, is normalised. Some incidences of shop and food-transporting trucks being looted have been reported, but this has not become widespread.

Public sentiment has been largely in support of the lockdown and the approach taken by national government. President Ramaphosa, enjoying broad (but not uniform or unqualified) positive sentiment prior to the lockdown, has been the face of the response, but has delegated much of the communication of the details to his various ministers. The Health Minister, Dr Zwelini Mkhize, has been seen as capable, forthright and non-ideological in approach.

Other ministers have had less favourable records during the lockdown, from the harsh approach and harsh words of the Police Minister, to the contradictory and seemingly arbitrary (and potentially illegal) decisions of the Cooperative Governance and Traditional Affairs Minister, among others. The conduct of the ministers and the stress of life under the lockdown are starting to shift sentiment and the President is under renewed pressure to assert his leadership.

On paper, the South African Constitution guarantees the Right to Food for all residents. On paper, South Africa still produces enough food to feed itself. But neither of these will address the hunger crisis unfolding right now under the COVID-19 lockdown. With the lockdown, first imposed on 23 March, having been extended from its initial 3 weeks to 5, and then the introduction of a 5-tiered system of lockdown levels, each of indefinite duration as the lockdown is gradually lifted, the urgency of a humanitarian food provisioning system is obvious to keep people from being malnourished, going hungry, starving or, eventually, rioting.

Responses to the crisis of hunger

Having been a participant in some advisory engagements with government on aspects of this emergency food provisioning for several weeks now, it was immediately evident that preparedness for a large-scale event of this nature, acute or sustained, was not adequately part of disaster planning and that officials were figuring many things out as the disaster unfolded day by day. Even this week, over a month into the lockdown, it was admitted privately that while yes, the cavalry was coming in the form of national government programmes and funding for food provisioning, that it would not be enough.

That the President announced the distribution of 250 000 food parcels nationwide when the need is 20 times greater gives one a sense of the scale of the mismatch of resources or capacity and need. In Cape Town alone 500 000 households need to be provisioned in a city of 4.5 million – nearly 40% of the population. There are plans for a national voucher system to enable needy residents to go to shops and exchange them for food parcels, but what format they take, how they are distributed, in what amounts, with what frequency, at what scale and redeemable at which shops for what kinds of food have all yet to be determined. Social welfare grants are being topped up temporarily during the lockdown to help those poorest households who already receive them, but the amounts are insufficient to stave off the actual hunger faced by millions.

Government has not been alone in the effort to address this crisis of hunger. The bigger NGOs who are experienced at humanitarian relief have lumbered into action and are starting to assist at an expanded scale after some weeks, also supported by donations from billionaires, wealthy corporations and others. Some ad hoc networks linking farmers, wholesale food markets and needy communities have been improvised, funded by donations.

In Cape Town a self-organising response has become an important part of the relief effort, with ‘Community Action Networks’, or CANs, being established by ordinary residents in communities across the city, coordinated loosely as a grouping called Cape Town Together. More affluent CANs self-matched with those in under-resourced communities and marshalled their resources and ingenuity to help, often starting with food parcels and soup kitchens, but including hygiene and cleaning products, PPE, educational materials and more.

An internal survey last week identified 170 informal feeding programmes being operated by CANs, most of which did not exist a month earlier. Donor funding, mainly small amounts from private individuals, is flowing into these networks and government funding has been put on the table as well. How these spontaneous, volunteer-driven, charity-based ad hoc programmes hold up over time, and whether they will become superfluous or ever more essential, remains to be seen as the lockdown persists.

Although at a national level, South Africa is thought to have sufficient food supplies, important trends regarding the hunger crisis are broadly negative in outlook. The food available now is either what was planted months ago, with farmers now having little incentive to plant or breed during a time of financial risk and market uncertainty resulting in future scarcity and price hikes, or it is what was imported before the lockdown (e.g., rice), while supply chains are disrupted globally and all national borders remain closed including airports, border crossings and some ports, with no certainty as to when this situation will change. The approaches to food provisioning coming together now will face weakening forces as budgets are stretched ever thinner, as crisis fatigue sets in among donors, and as energy and focus flags among volunteers and civic-minded residents.

While the skills and efficiency of government and NGO food provisioning are likely to increase with time, the effectiveness of addressing hunger will largely turn on sustained budget levels and not improved operations. That inter-governmental relationships are contested (city-province-national ‘co-equal’ spheres) may diminish with time as the working processes are normalised, but with time the ‘we’re all in this together’ camaraderie is also likely to diminish and the old institutional and political party fault lines will re-emerge to some degree. We are already seeing the stresses of governing in an unequal society in current political critiques of the pandemic responses of national political leaders as being elites out of touch with the realities of the lives of ordinary South Africans. That no major mitigating positive trend or opportunity, save elimination of the disease through treatment or vaccine, is currently evident, is worrying.

An uncommon resilience among South Africans

For all the negative outlook about hunger during this lockdown, South Africans have robust experience staring down a number of other crises in recent years, including chronic electricity shortages and rolling blackouts, sustained drought (including a countdown to ‘Day Zero’ in 2018), and nearly a decade of corruption and looting during the previous presidency that left state-owned enterprises bloated and haemorrhaging billions annually, with the country’s credit rating unanimously now deemed worthy only of ‘junk’ status. Of necessity this is a resilient society, and with the confidence from having overcome apartheid, is not lacking for grit.

Adapting in the face of such shocks and stresses has become something of a gallows-humour hallmark of contemporary South Africa. One can see other such characteristic strands that run through South African society highlighted by the responses to the food crisis, for example:

While the lockdown hunger crisis has a unique origin in the novel coronavirus, the response to it and the effects of that response seem to resonate, or perhaps even to rhyme in some way with the past, both recent and deeper.