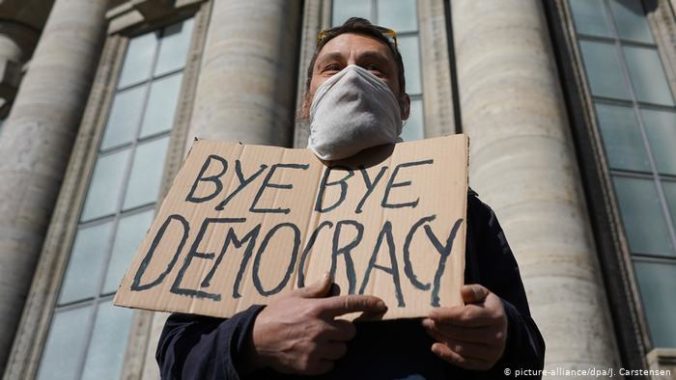 Thoughts on Political Science in a Time of Plague

This is a guest post by Jeffrey C. Isaac, James H. Rudy Professor of Political Science at Indiana University, Bloomington. You can follow him at his blog at Democracy in Dark Times.

The coronavirus has thrown the entire world into a terrifying crisis that challenges public health and the very possibility of normal social interaction.

If ever there were a time when scholarly research and relevant knowledge were needed, it is now. Public officials and journalists have clamored for new scientific and medical research, and universities and university-based scholars have answered the call.

The Contributions of Certain Sciences to Public Health Seem Clear

A few weeks ago I received a note sent to all faculty and “friends” of Indiana University by the Indiana University Vice President for Research. Billed as “IU RESEARCH IMPACT: COVID-19 UPDATE,” the note offered reassurance that, at a time of widespread crisis, Indiana University research facilities were continuing to operate and that Indiana University faculty were as productive as ever (“In fact, during the month of March, IU faculty, staff, and students submitted more research proposals for federal and other external funding than in any previous month in the past decade”).

If the note’s primary purpose was to articulate “congratulations” and pride at the persistence of faculty and administration during the crisis, its secondary purpose was to underscore the pressing relevance of university-based research.

The following week a similar letter was sent out by IU President Michael McRobbie, also extolling the ways that IU researchers have “energetically engage(d)” the challenges of COVID-19. The letter singled out the development of real-time COVID diagnostic tests; the development of a “new Coronavirus Data Hub” capable of tracking the total number of COVID-19 cases in Indiana, as well as county-level cases, county-by-county risk factors and central Indiana risk-level areas; the use of IU’s advanced computing resources to help understand the pandemic; and the use of machine learning techniques from the School of Informatics to help policymakers locate vulnerable populations.

The work that is being extolled here clearly meets the pressing needs of the moment.

And the crisis has underscored the importance of university-based research in a wide range of areas, from biology, medicine, and epidemiology to engineering, psychology, and social network theory. As Vox regularly reports, there has been ongoing scientific progress in these areas (see here, here, here, and here). The crisis has also raised serious questions about law, ethics, and public policy, of the sort that have been impressively addressed, for example, by Harvard University’s Edmund J. Safra Center for Ethics under the leadership of Danielle Allen, which has convened “a rapid response initiative in response to the COVID-19 threat,” and has published a range of interesting white papers on how public policy can best address the challenges of public health (this work has recently been incorporated into the Center’s COVID-19 Response: Pandemic Resilience Roadmap).

At the same time, the current crisis quite obviously extends far beyond medicine or public health policy, and raises the most pressing questions of public life itself. These questions include the sources and consequences of social and economic inequality and vulnerability; the strength and limits of social capital in the face of deadly disease and extreme social isolation; the implications of digital technologies that facilitate rapid communication of information and disinformation; and the very nature of social interdependence and public authority in the modern world.

Among such pressing questions, none looms larger right now than the crisis of constitutional democracy itself. In the U.S. context, this crisis reduces to two related concerns.

The first is that the threat of Covid-19 and the demands of “social distancing” will interact with other archaic features of the U.S. electoral system to damage the integrity of the November election, constraining public opposition; limiting access to the polls for many voters; allowing demagogues to raise questions about the legitimacy of the electoral results; and thus placing in question the very possibility of a peaceful alternation of power.

The second is that the current president of the U.S., Donald Trump, has been consistently disdainful towards many features of constitutional democracy. He regularly expresses hostility toward the independent press and towards his political opponents. He refuses Congressional oversight. He has responded to the pandemic by simultaneously refusing any responsibility and insisting that he has “total authority” and can do “whatever I want.” In recent days he has supported armed protestors of state shelter in place orders– declaring “LIBERATE VIRGINIA, and save your great 2nd Amendment. It is under siege!”—and then declaring that he will close the border to all legal immigration by executive order.

In short, at a time when responsible, effective, accountable, democratic government is needed more than ever, the chief executive of the U.S. is behaving in ever more autocratic ways.

Every single medical and public health innovation that is currently being developed by the most brilliant scientific minds in the U.S. academy is a meaningful response to the COVID crisis only if it is incorporated into effective public policy by a government that is serious about governing, transparent with its citizens, and accountable to the electorate. And right now it would appear that the U.S. does not have such a government.

Centuries ago, Aristotle famously declared that politics was “the master science.” The current crisis suggests that perhaps he was not far off the mark. For while political science cannot analyze the microbial structure of a virus, develop a new vaccine, or prescribe a new method of contact tracing, it can do something that those other scientific enterprises cannot do: it can enlighten and educate citizens about the sources of social vulnerability and political contention, the dynamics of domination and autocracy, and the reasons why democratic self-government is such a fragile and such a precious historical achievement.

Political scientists from a variety of scholarly perspectives have been sounding the alarm for some time about the “erosion of democracy” and the particularly authoritarian tendencies of the current U.S. president (Steven Levitsky and Daniel Ziblatt’s How Democracies Die, which has received extraordinary attention, is merely one well-known example of political science attention to the crisis of democracy).

The Coronavirus Exacerbates A General Crisis of Democracy

Political scientists have been especially alarmed in recent weeks by how Covid-19 has exacerbated the above-mentioned threats to democracy. This has led many colleagues to apply their ongoing research agendas and findings to the Covid crisis; much of this research has indeed been featured here at Duck of Minerva. At the same time, it has led a great number of colleagues to devote themselves to the broader task of public engagement. In late March an open letter from political scientists declared that “We Must Urgently Work to Guarantee Free and Fair Elections in November.” The letter received over one thousand signatures in a matter of days. As the drafters of the letter, my colleague William Kindred Winecoff and I subsequently published a piece explaining the reason why such an extraordinary academic consensus was possible: because everything we know about politics informs us that it is during moments of crisis that democracy is most endangered and is thus in most need of special vigilance and support.

The letter was not itself a form of scholarship. It was a form advocacy, on behalf of something that virtually every U.S. history and civic textbook extols—the value of democratic elections and of democratic citizenship more generally.

But while the letter was not itself scholarship, it was grounded in volumes of scholarly research, developed over decades, about how public oversight is essential if government is to be accountable to its citizens; how open and transparent public debate is necessary if intelligent public policies are to be crafted to deal with pressing public problems; and how free and fair competitive elections, which allow for the peaceful alternation of power, are the most important form of public oversight and social learning in a complex modern society.

These ideas are at the heart of modern political science research. They are developed, and debated, in every issue of every major political science journal, from Perspectives on Politics to American Political Science Review, from Studies in American Political Development to World Politics to Democratization to Journal of Democracy. And they are disseminated by a range of web platforms that include the Monkey Cage, Vox, and Duck of Minerva, Public Seminar, and The Contemporary Condition.

This research is governed by scholarly standards of evidence and argumentation. While most political scientists have partisan loyalties, political science scholarship is typically not partisan. It is broadly scientific. But it does take its bearings from the pressing challenges of modern democratic self-government. And most political scientists see their work as contributing to the broader processes of public education and public enlightenment.

The work of political science, and the human sciences more generally—history, sociology, anthropology, geography, economics, and “the humanities” too—is essential right now, if we are to inform and educate the public about how to maintain not simply the medical health, but the social and political health, of our people.

And none of this knowledge, whether medical, cultural, social or political, will have much value unless it can be used by public officials, public health workers, and ordinary citizens, to improve the well-being of the society at large. And this requires a functioning and healthy democracy and a government that takes science–including social science—and public enlightenment seriously. As long as this is in jeopardy, political scientists have a crucial role to play, as researchers, teachers, and public intellectuals.

Apart, Together: The separate worlds of Covid-19 beliefs