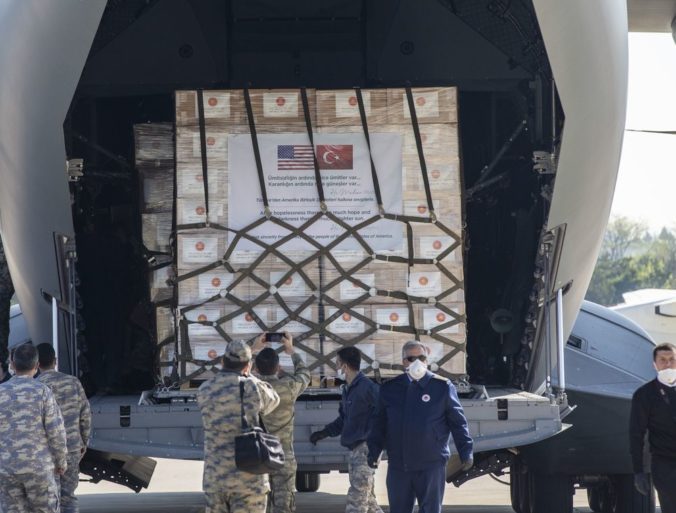 About a week ago, Egypt sent medical equipment to the United States to help in the fight against Covid-19. The packages were printed with “From the Egyptian People to the American People.” This prompted many dark jokes, as Egypt is currently suffering a major Covid-19 outbreak it is struggling to contain. Then Turkey followed suit. Turkey sent a plane with medical equipment to the United States, despite also suffering a Covid-19 outbreak.

The “obvious” explanation is economic: Egypt depends on US aid, so they want to keep us happy. Turkey doesn’t, but its economy is struggling so maybe they want to ensure the United States will help them if needed.

But the explanation, like so many in our sub-field, is insufficient, and leaves many questions unanswered. Why are Egypt and Turkey doing this, and not so many other dependent countries? Why did Turkey follow Egypt’s lead? Is Turkey really so dependent on US aid that it’d give up crucial medical supplies?

The answer really involves the importance of status and hierarchy in international relations. Starting with the foundational works of Gilpin on international order and change, we’ve long acknowledged the informal hierarchies that form among states, based on prestige they acquired through their stances and history. Recently, scholars have begun analyzing the way states acquire and use status, and the impacts this has on various aspects of international relations. Similarly, others have argued international relations is full of hierarchical relations that structure state behavior. Overall, these works argue that states are driven not just by the desire for more wealth or material resources, but by the need for greater prestige. Likewise, states’ influence over others is often a factor of intangible status differences as much as economic or military coercion.

It also touches on the particular dynamics of Middle East politics. Middle Eastern international relations include a major role for debates over identity and values, the “symbolic politics” Barnett discussed. States appeal not just to material interests but also common causes and shared identities. Additionally, informal hierarchies frequently form and re-form, with dominant states managing regional politics or contesting the status of the states on top.

Specifically, we sometimes see states taking action that both recognizes and challenges the status of “superior” states. This was apparent in the run-up to the 1967 Six Day War/June War. Egypt sat atop an informal hierarchy of Arab States since the 1956 Suez Crisis. Yet, other states began to be critical of its actions, pushing it to take a stronger stance on Israel; this included both radical states like Iraq and conservative ones like Saudi Arabia.

That’s what’s happening here. America is the dominant power in the Middle East, and states in the region feel compelled to show their fealty to the hegemon. Why Egypt and Turkey, specifically, though? It’s because these two states often desire–or believe they have–a bigger role in the region. By offering to help America, they are highlighting their own prominence, increasing their status. Focusing just on the material incentives overlooks the rich and complex nature of regional relations.

This highlights a common issue in IR: lazy explanations. We often tend towards the easier, most “obvious” explanations. This usually involves material incentives. But this isn’t the same as the simplest and most direct explanation. Indeed, we’re often twisting the fact around to make a convoluted case for economic or military power.

Islam doesn’t really matter in Saudi Arabia’s foreign policy: it’s just oil wealth. Turkey isn’t trying to increase its regional prestige, it’s just maneuvering for economic support. Etc. etc. etc. These explanations are not completely wrong; they get part of it. But they overlook the broader context and lead to misinterpretations of what’s going on.

But even though these explanations aren’t sufficient, they quickly take hold in academic and policy circles, creating a “common wisdom” that skews understanding of the issue. This “common wisdom” is then self-perpetuating. Those who push back against its policy prescriptions are cut out of professional networks. And those who challenge its academic pronouncements get blocked by peer review.

We can see this on a recent issue I’ve written about. Last fall, tensions were increasing between Saudi Arabia and Iran. Many policy observers assumed that Saudi Arabia was trying to pull America into war with Iran. I pointed out, however, that there was actually evidence of Arab states–including Saudi Arabia–trying to restrain America. And I expanded that here, noting that it’s almost a case of “chain-ganging in reverse.”

When it became apparent that Saudi Arabia didn’t want war, the common wisdom shifted to argue that they only were hesitant because they thought America was being too indecisive. Nevermind that America was consistently hostile to Iran under Trump. Or that THERE WAS NO EVIDENCE for this claim. It quickly took hold as the explanation for Gulf politics, as I discussed here.

I don’t want to beat a dead horse, but that’s just wrong, and will lead to flawed analyses and policy prescriptions. But it’s not clear how to change this situation, given the strong incentives to go along with established voices in both the policy and academic sphere.

These “lazy explanations” are a problem in the analysis of Middle East politics, and the assumption of material interests driving international relations. And I worry Twitter makes it worse; as people just retweet 250 character hot takes, eventually they gather momentum and look like a fact.

Scholars and policy analysts need to be wary of such lazy explanations for complex events, and push past them to really understand international relations.

When norms collide: The COVID-19 pandemic and difficult choices on the hierarchy of norms and values