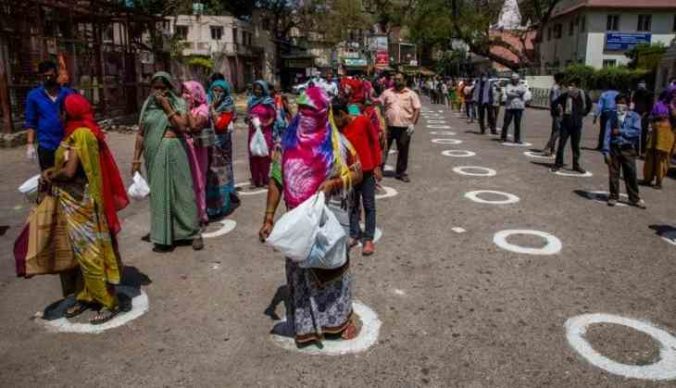 This is a guest post from Suparna Chaudhry, incoming Assistant Professor of International Affairs at Lewis & Clark College. Her research focuses on human rights, international law, and political violence, with a focus on state persecution of NGOs. She can be found on Twitter @SuparnaChaudhry.

On March 24, Indian Prime Minister Narendra Modi imposed a three-week national lockdown on India’s 1.3 billion people. Domestic and international air travel, passenger trains, interstate buses and metro services were all suspended. State borders were sealed and states had to ensure, “no movement of people across cities or on highways.” The lockdown has since been extended twice, most recently on May 1, when the government announced its continuation until at least May 17.

While the latest announcement relaxed movement restrictions in districts relatively unscathed by Covid-19, a large part of the population, including all major cities, remain in the severely-hit red zones under complete lockdown. What have been the effects of the lockdown? What role have non-state actors played, in particular non-governmental organizations (NGOs), in Covid-19 containment and relief efforts? What challenges do these groups face from the state and how might the pandemic influence state-NGO dynamics?

Unplanned and chaotic: Consequences of the harshest lockdown in the world

The lack of adequate notice before the initial lockdown announcement, as well as its subsequent extensions, have adversely impacted a majority of the population. Approximately 60-70% of the Indian economy is informal with many people working as construction labor, agricultural workers, domestic workers, street vendors, rickshaw pullers and auto and taxi drivers being heavily dependent on daily wages.

Migrants from rural areas constitute a large part of the informal economy and they have been the hardest hit during this lockdown. Between movement restrictions and the closure of state borders a mere few hours after the initial lockdown announcement, many were left stranded in cities. With buses and trains suspended, many marched back home to their villages and towns – a move described as the “biggest human migration on foot after Partition” on the Indian subcontinent. Many died from exhaustion and hunger on the way. Those who remained in cities have had little to no safety net.

It took five weeks after the initial lockdown announcement for the government to permit these migrants to head home on transport. However, even this belated response imposed additional hardships on migrants. State governments, instead of the central government, are responsible for organizing these inter-state buses. Migrants have had to pay extra to avail themselves of these services. While calls to reopen the economy can be heard across numerous Western countries, many argue that this is not a comparable discussion in a country like India. With almost 450 million people part of the informal economy, a large percentage of the population cannot hope to survive in this state of extended lockdown without adequate government support.

Amidst the massive disruption caused by the pandemic and meager government support, non-governmental organizations (NGOs) have assumed a critical role in relief efforts, for example, providing shelters to displaced migrants, organizing community kitchens, and spreading information about the virus. The Indian government recognized the NGOs’ role in delivering an effective crisis response and, at the end of March, reached out to more than 90,000 groups, asking them to join the government’s efforts in tackling the pandemic. This move caught many NGOs by surprise.

NGOs have faced massive constraints in India and across the world

NGOs have faced serious constraints not just in India, but across South Asia and around the world. Data from the CIVICUS Civil Society Monitor shows that NGOs are under attack in nearly 60% of countries across the globe – 111 in total. There is no doubt that violent attacks on these groups are often an effective means of curbing dissent. But states have also gotten savvier and refined their strategies to avoid criticism that often accompanies violence.

States have started implementing what I term in my current book project, Uncivil Societies, ‘administrative crackdown.’ Administrative crackdown is  the passage of laws to create barriers to entry, funding, and advocacy by NGOs. In contrast to violence, administrative crackdown has fewer perceptible adverse consequences – citizens may see it as regulation rather than repression, resulting in little to no counter-mobilization. It may also circumvent concerns among state security or bureaucratic agents about illegitimate orders based on violent repression. The international consequences are also fewer, since legal restrictions rarely invite condemnation or threats of aid withdrawal.

Based on data I collected from both primary sources (legislation) as well as secondary sources like reports produced by the International Center for Not-for-Profit Law (ICNL), USAID Civil Society Organization Sustainability Index, USAID NGO Sustainability Index, NGO Law Monitor, CIVICUS and World Movement for Democracy (WMD), among others, I find that the incidence of administrative crackdown has consistently increased over the last few decades.

Foreign funding laws – the extent of which can be seen in the graph below – are the most direct hit to NGOs’ lifelines. In many developing countries, citizens are often too poor to support local NGOs. Potential domestic philanthropists may also be deterred by dismal tax incentives or the government’s threat to withhold their business permits.

These developments are also not just limited to authoritarian or hybrid regimes, but are also present in democratic states. Over this past decade, Indian NGOs have faced intense scrutiny,  stricter regulations, and smear campaigns. In 2010, India amended its Foreign Contribution Regulation Act (FCRA), targeting all non-profits receiving money from foreign sources and prohibiting those whose activities were ‘political’  in nature. A leaked report by India’s Intelligence Bureau accused NGOs of draining the country’s GDP by 2-3% a year.

Between 2014 and 2019, 14,500 NGOs were banned from receiving money from abroad. Consequently, foreign contributions into the social sector declined by 40% between 2014 and 2018. The NGOs targeted during this wave of attacks were not just limited to groups working on contentious causes such as human rights, corruption, advocacy, but also included groups working on uncontroversial issues such as public health. For example, in 2017, the government cancelled the license of the Public Health Foundation of India, a group receiving funds from the Bill and Melinda Gates Foundation, that was working to provide technical assistance for HIV prevention, access to medication, and capacity building of primary care physicians.

Stepping in to fill the void: NGOs during the pandemic and changing state-NGO dynamics

The recent overtures by the Indian government towards NGOs, along with the Ministry of Home Affairs’ advisory to states to utilize services of NGOs, signals a possible change in state actions towards these groups. While governments have increasingly maligned these organizations over the last few decades, the Covid-19 pandemic presents an opportunity to reshape the nonprofit sector’s relations with states. As NGOs now step in to provide services and fill gaps in government responses, they also face an opportunity to strengthen their legitimacy among the public – which may have become damaged by the government-led smear campaigns.

As governments struggle to keep up with community needs, NGOs are quicker to act and are also more attuned to local needs. Pandemics, just like natural disasters, can exacerbate inequalities and nonprofit advocacy and services are essential not just during the pandemic, but even in its aftermath. Given the already overstretched healthcare infrastructure in countries like India, NGOs also play an important role in providing information about preventing the spread of the virus and in the distribution of PPE and other protective measures such as soaps and hand sanitizers. They can also fight disinformation, which is particularly important as it has aggravated community tensions and sparked xenophobic violence in India.

To be sure, there remains reason to be cautiously optimistic about the possibility of more amicable relationships between governments and nonprofits across the world. However, many governments such as Hungary, Bolivia, Philippines, among others, have taken advantage of the pandemic to impose censorship and expand state surveillance. Last month, the Indian government charged numerous activists, journalists and lawyers under the repressive Unlawful Activities (Prevention) Act (UAPA). International support for these civil society groups is important for these organizations in not only in their crucial relief efforts, but also to bolster their voices as they protect societies from greater rollbacks on their democratic rights and state excesses during this crisis.

Too Soon for a Coronavirus Commission