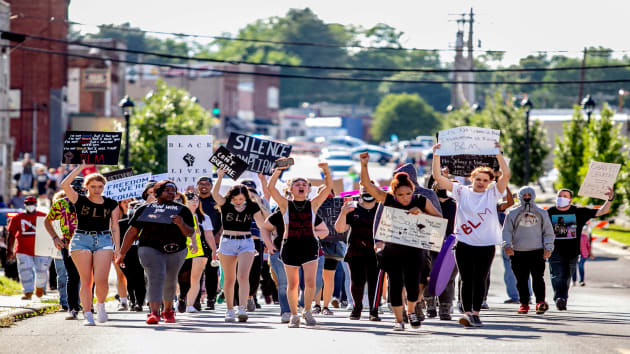 This is a guest post from Kimberly Turner, a doctoral candidate at Southern Illinois University Carbondale. Her research focuses on contentious politics, political economy, and street protests.

After a blustery show of force and threat to deploy the military onto American street, President Trump ratcheted up the rhetoric by calling protestors terrorists. For many the past week has been a dizzying escalation in the scope of the protests and the response by governmental officials. This scenario is more akin to what we assume is the response of an authoritarian state and not on the streets of a democracy.

There they would be very wrong. While unusually elevated, the characterization of protestors as criminals and resulting escalation of force is a common tactic deployed by officials in democracies and authoritarian states alike. And it often starts from a common inflection point, when officials begin to depersonalize protestors as outside agitators rather than constituents they are duty bound to serve and protect.

Some commonalities between mass protests of the 2010-2020 period have emerged while writing my dissertation on skilled labor grievance in the Arab Spring. Tunisia’s Jasmine Revolution was initiated due to poor policing. Ben Ali claimed the protests were the work of foreign terrorists non-reflective of actual public sentiment, and then the security forces came out.

Egypt and Libya followed the same script: Mubarak blamed foreign elements, while Qadhafi denounced supposed foreigners and ““rats” of international governments”. Blaming “outsiders” is immediately accompanied by deployment of security forces followed by military against civilians. The use of outsider rhetoric is not limited to authoritarian leaders either: India’s Arvind Kejriwal blamed “outsiders” for February riots, while government officials from Ferguson to Milwaukee have blamed “outsiders” for violent spurts emerging from racist policing.

Dog whistles in this context are carefully coded phrases meant to stoke racial hostility.  Ian Haney Lopez notes that usage of these terms is strategic: distract the public’s attention away from serious wealth inequities by offering a scapegoat and present your party as the solution to society’s ills. The “othering” of protestors follows the tradition of the dog whistle.

This tactic, of referring to demonstrators as “outside agitators” is widely used by officials across the globe when facing grassroots movements. The rhetoric is intended to deprive a movement of its calls for accountability, legitimacy, salience, and recourse while maintaining the political equilibrium.

Minnesota’s governor and the mayors of its two largest cities were quick to blame outsiders, erroneously claiming the totality of early arrests as nonresidents. Their retractions came just as swiftly once KARE 11 reported that arrestees were overwhelmingly from within or surrounding Minneapolis. However, this did not caution other governors and mayors across the country against adopting the dog whistle as protests erupted in at least 140 cities over a six-day period.

While far right and leftist groups, along with opportunistic looters and rioters, have used the protest as cover for their own activities, nonviolent protests are often characterized by moments of violence, or even violent flanks. Opportunistic and fringe groups will always try to insert themselves into the process to stir up trouble. Identifying and combating these groups is certainly important but officials too-often use these groups as grounds for de-legitimizing demonstrators.

On day five of the protests, Minnesota governor Tim Walz denied that protests remained about relevant grievances, “The situation in Minneapolis is no longer in any way about the murder of George Floyd…It is about attacking civil society, instilling fear and disrupting our great cities.” Officials have been eager to shift the narrative away from poor leadership on anti-racist policing to “law and order” policies and rhetoric.

Outsider rhetoric at its base is an attempt to deny air to the flames of a protest. Mark Walmsley’s article notes that denial is a central facet in official response to mass protests. Just as southern officials in the 1960s rebuffed claims of racial discrimination, conservative commenters rallied around a common script of bothsidesism, “playing the race card”, and “just a few bad apples” during the Ferguson protests. Blatant denial can be a powerful tool for a governmental official, even when facts are apparent, and evidence is abundant.

By simply denying that protests are derived from local grievances that have national and often international salience, local officials can re-frame grievances about policing and racism as non-localized, and thus not their responsibility. If only a small segment of their constituents is impacted, then officials have little incentive to act.

The “few bad apples” argument can then be deployed to offload responsibility in action to the courts or another entity. Officials may then argue that a judicial recourse, rather than a political one is appropriate. By shifting responsibility to the judiciary, the official can also delay calls for substantive action by arguing that the judicial recourse should precede any political ones. As litigation can take years in the courts, the official is basically off the hook.

Use of the “outsider” rhetoric also allows official to cast suspicion on the actual legitimacy, saliency, and scope of the protest. Minneapolis Mayor Jacob Frey, having first supported calls for arresting Derek Chauvin, warned residents Saturday that “If you have family members or friends who are even considering protesting, this is no longer about protesting. This is no longer about verbal expression.”

This implies that the sole rationale of returning demonstrators is for criminal intent rather than expressive purposes. By framing complaints as imported by criminals, the legitimacy of the protests then becomes highly questionable to the public. Simultaneously, officials can then claim that the scope of the protest is much smaller than the media or activists claim. Attempts to under-report the number of protest participants allows officials can claim that “their town” doesn’t have a race problem.

Under-reporting crowd numbers is a common tactic of governmental officials, both democratic and non, as larger crowds restrict narrative control. As Dawn Brancati noted, larger crowds bring greater national and international media coverage, are more difficult to repress, and more difficult to discredit. Regimes also risk Lichbach’s 5% Rule where active mobilization of 5% of the population becomes destabilizing. Once officials have lost control the narrative, they also lose control of the parameters of the demand slate. Officials may have to then acquiesce on policies and positions suboptimal to their departmental interests.

An interesting but insidious by-product also emerges where the use of outsider rhetoric by officials simultaneously re-criminalizes black protesters and re-centers the conversation around whites. Black demonstrators are criminal for being in the street, regardless of the purpose, while white radical groups become the locus of new media reporting.

The focus shifts from black grievance and grief to white anger and power. As white radical groups are often discussed in partisan terms rather than social justice terms, officials manage to neatly muzzle and target black demonstrators, and return the conversation to comfortable partisan patterns. Reconfirmed is which segment of the constituency officials prioritize and serve, and marginalized communities are codified as outsiders.

Mentoring Is What You Make Of It