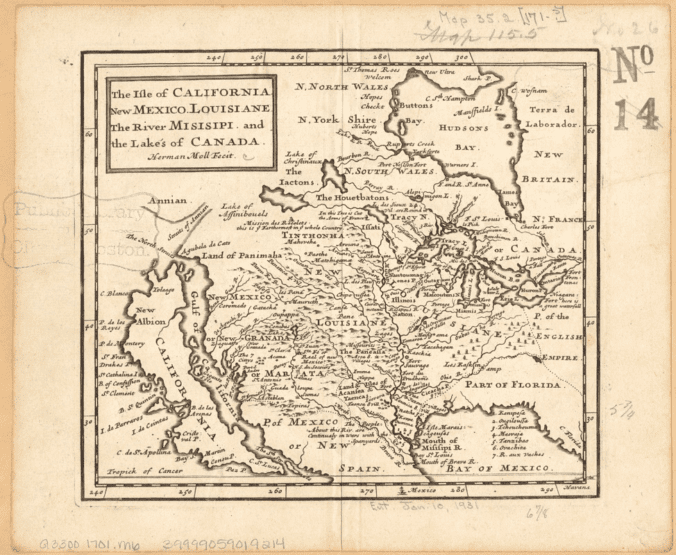 In 1701, a cartographer named Herman Moll produced a map entitled “The Isle of California: New Mexico: Louisiane: The River Misisipi: and the Lakes of Canada.” Glance at this image, and you will notice the exaggerated size of Florida, condensed Great Plains, and presence of a Gulf of California fully separating the state from the rest of the country. How might such a map have been drawn?

The apocryphal story goes something like this: In the 1600s, a first set of explorers arrived in California via Baja. Trekking north, they soon encountered non-navigable waters. A second set of explorers started at the north end of the territory, journeying south through the Straits of Juan de Fuca; they too encountered water they could not pass. Putting together the explorers’ reports, the mapmakers in Amsterdam connected the dots, and the Island of California appeared.

Years later, a third group of explorers sought to cross the Gulf and explore the land beyond. They arrived, fully prepared with long boats in tow. But of course, instead of water, they encountered the Sierra Nevada mountains. The crossing was merciless, and most of the explorers died. Those who survived shared their discovery with the mapmaker. “Well,” he replied, “the map can’t be wrong; you must have been in the wrong place!”

This tale illustrates our very human blinders. We have outsized confidence in what’s familiar (Florida) and pay less attention to what isn’t (the Plains); we extrapolate from existing knowledge to project into the unknown. And when faced with contradictory evidence, our entrenched models and maps remain difficult to overturn.

For the last 15 years, we at the Bridging the Gap Project (BTG) have used this story to introduce scenario analysis as a central piece of our New Era Workshop for PhD students. During the workshop, two dozen graduate students in political science, history, and related disciplines are presented with thematic, global scenarios, unfolding five to ten years in the future. Through analyzing these scenarios and probing the challenges and opportunities presented by plausible future worlds, our participants shed their “mental maps” to pose questions about future-oriented policy and research questions. BTG directors and fellows have previously written about this exercise—an innovative method for generating novel, policy-relevant research questions.

In 2017 and 2018, a central component of our scenario analysis was a global pandemic, in which a novel pathogen producing “ebola-like symptoms” emerged in South Sudan, the Central African Republic, Ethiopia, Kenya, and Uganda in June 2024. By July of that year, the scenario went, cases start appearing in China, India, and Bangladesh, traced back to oil facilities in South Sudan. Poor infection control at local hospitals allows the pathogen to spread quickly—first regionally and then globally. We built into the scenario the smoldering embers of global spread, fueled by the international nature of work and travel in the twenty-first century.

In recent weeks, we have given a lot of thought to this exercise and resulting discussions—in particular, to what we missed, despite our intentional and explicit efforts to abandon our “mental maps.”

There were some glaring gulfs in our mental maps, even though the entire purpose of the exercise was to break out of typical thinking.

First, we got a variety of things wrong. Most glaringly, we failed to anticipate that the United States and several other industrialized countries would lead the world in infections and deaths. Instead, we naively assumed that a virus would spread more fatally in the developing world, where, as of this writing, such devastation has not materialized. Relatedly, we did not imagine that the United States could so thoroughly botch its response to a global pandemic—both in terms of its failure to lead, promptly and strategically, but also its failure to even heed warnings from the rest of the world and scientific community that might have saved untold American lives.

Second, despite acknowledging that global crises produce both challenges and opportunities, we were wildly optimistic about the nature of the global response. We overestimated the capacity of the World Health Organization to play a central, constructive role in global pandemic response, though existing research suggests we should have known better. More generally, we had mixed expectations for international cooperation. Though our conversations in early 2017 and 2018 were largely concerned with impending collapse of the liberal international order, we still expected a global health disaster to re-energize or inspire positive new avenues of cooperation. Those expectations have been dashed in the current reality.

Ironically, when we designed the scenario, we weren’t sure if it was sufficiently “political”—we felt the need to add political intrigue. Indeed, our sketch alluded to the intentional infection of a Saudi king at the hand of a regional rival. Our interest in the political drivers of the balance of power distracted us from sensing how pandemic response might naturally shake up global leadership and competition, while bolstering strongmen. And, we did not guess that several world leaders’ falling ill—from UK Prime Minister Boris Johnson and Prince Charles, to Canadian First Lady Sophie Gregoire Trudeau, to Iran’s deputy health minister—would seemingly matter so little.

Despite our interest in the global balance of power, we failed to extrapolate the range of effects on interstate military conflict. Others have discussed the risks to U.S. military readiness in light of the tragic situation on the USS Roosevelt. There is serious thinking happening about whether the COVID-19 situation makes inter-state war more or less likely. And fora like the WHO, instead of spearheading the global response, are terra firma for long-standing geopolitical squabbles.

Finally, we failed to consider the many negative externalities of a global health crisis, despite our explicit desire to use scenario analysis to explore the intersection of health and more “traditional” aspects of international politics. We failed to imagine the crisis of democracy currently occurring in the United States as republicans and democrats battle over voting by mail, holding in-person nominating conventions, and even postponing elections because of public health concerns. There are now real fears that the November 2020 elections may be in jeopardy. We also did not think through the ways that leaders from Turkey’s Erdogan and Israel’s Netanyahu to several U.S. Senators and President Donald Trump would manipulate this pandemic for personal enrichment and political gain.

What We Got Right

Nevertheless, there was much we got right. At the most basic level, we recognized that a global pandemic was conceivable, and that it could be a major driver of international politics in the future. On this point, we were in excellent company: Professional forecasters from the U.S. intelligence community, Johns Hopkins University, and the Center for Strategic & International Studies (CSIS) have been conducting pandemic scenario analysis—with a focus on coronaviruses—for years.

Second, we anticipated that a global pandemic would provide openings for emerging and non-traditional forms of leadership, both within public/private partnerships and by non-state actors. Indeed, the lack of coordinated preparation for a health crisis has encouraged 3D manufacturing companies working with individuals and hospitals to quickly generate personal protective equipment. We’ve seen the mayors of San Francisco and governors of Washington, Oregon, and California coordinate to transfer much needed supplies to key hotspots, when the federal government cannot undertake the critical mission. Drawing on a growing literature on rebel governance, we also expected violent, non-state groups, including criminals and insurgents, to take advantage of gaps in public service provision—in ways both helpful and harmful to local populations.

Third, our scenario discussions returned to the key role of borders, though not necessarily in ways we would have expected. We talked through the implications of states’ shutting down borders and closing off international travel. Technology has played a critical role in facilitating external surveillance and border shut-downs. States like Israel and China’s using intelligence assets and capabilities to surveil their own population is reminiscent of the dark intersection of geopolitics and public health in Max Brooks’s World War Z.

Last, our discussions assumed that in a pandemic, states would focus on individual security and the lives of citizens at home and abroad. We anticipated that countries like the United States would move to airlift their citizens from locations abroad. Indeed, the United States worked quickly to “rescue” diplomats, spring breakers, and students studying abroad. Our scenarios predicted states’ withdrawing their peacekeepers from foreign lands—yet we still found it jarring when the United States pulled Peace Corps volunteers suddenly home.

What Have We Learned?

The COVID-19 pandemic has shown us just how hard it is to escape our mental maps, despite embarking on an exercise specifically designed to help us think outside of the box.

There are a few ways we can continue to work on this. BTG is committed to diversity and intentional inclusion in all of our programming: redoubling our commitment to including participants with diverse backgrounds and perspectives—in terms of both identity and research interests—is absolutely crucial to abolishing groupthink and generating the most creative, constructive conversations.

Current events urge us to spend more time engaging with the domestic consequences of global politics, especially within our own country. That the pandemic and accompanying economic crisis have fueled growing crises in federalism, social mobilization, anti-black violence and white supremacy, and civil–military relations in the United States should have been a larger part of our analysis, and must be going forward.

Beyond our work at BTG, the events of the last several months have thrown into stark relief the seriousness of combining creative forecasting with political will. As noted previously, public agencies conducted extensive, professional scenario analysis on exactly this kind of pandemic, and private institutions predicted almost every major turn we’ve seen since January. In other words, anticipating a pandemic of this nature was not difficult. U.S. policymakers cannot plausibly claim that the pandemic was unknowable; it was repeatedly and urgently predicted by our own intelligence community.

Instead, preparing for, and responding to, such novel global challenges requires patient investment and sustained political will. Good predictions are powerless without concomitant response, planning, and preparing for the worst case scenario.

Unable to imagine the United States at the heart of such a disaster, our mental maps did not let us see that American leadership on a contemporary existential global challenge was a Gulf of California of our own, leaving us now ill-equipped and with brutal mountains to climb.

Dear Civ-Mil Community: The (Retired) Generals Are Speaking & We Should Listen