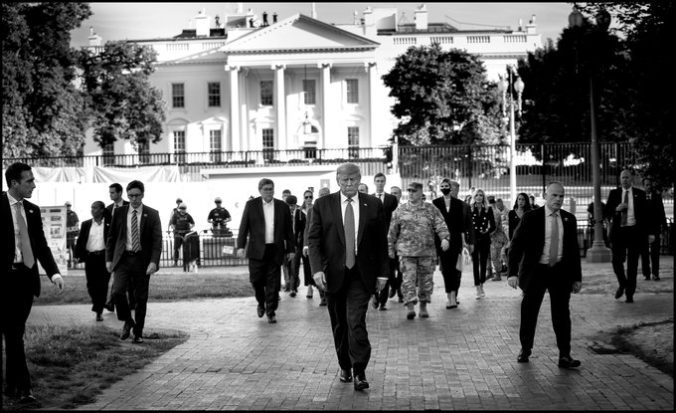 Dear Civ-Mil Community: The (Retired) Generals Are Speaking & We Should Listen

This is a guest post by Carrie A. Lee, an Assistant Professor at the US Air War College. The opinions and recommendations offered in this piece are those of the author do not represent the official policy or positions of the U.S. Government, U.S. Air Force, or Air War College.

On the first evening of June 2020, President Donald Trump used National Guard military police units to fire tear gas and rubber bullets on peaceful demonstrators in front of St. John’s Episcopal church in Washington, DC. The move, which was largely perceived to be an intentional and excessive show of force to clear the way for a photo-op, sparked outcry amongst observers from across the political spectrum, including those of us who study civil-military relations and remain concerned about the increasing use of the military for partisan political purposes.

Two days later, former Secretary of Defense and General (Ret) James Mattis broke his long silence and denounced the president and his actions, writing that, “Never did I dream that troops taking that [enlistment] oath would be ordered under any circumstance to violate the Constitutional rights of their fellow citizens—much less to provide a bizarre photo op for the elected commander-in-chief, with military leadership standing alongside.”

It comes on the heels of a similar editorial by Admiral (Ret) Michael Mullen, who served as the 17th Chairman of the Joint Chiefs of Staff titled, “I Cannot Remain Silent,” where he stated that Trump had, “laid bare his disdain for the rights of peaceful protest in this country, gave succor to the leaders of other countries who take comfort in our domestic strife, and risked further politicizing the men and women of our armed forces.” Both pieces’ tone and tenor can only be interpreted as a stinging rebuke of not just the president, but of Secretary of Defense Esper and current Chairman of the JCS General Mark Milley—something that is perhaps unprecedented in U.S. civil-military relations.

The last time Mullen spoke out, prominent members of the civil-military relations community largely condemned his remarks. Many will be tempted to follow this pattern of behavior. After all, civil-military relations scholars have a long history of chastising retired senior officers for wading into political waters on the grounds that such speech compromises the ability of the military to maintain its identity as a non-partisan institution.

And on the whole during normal times, this is not a wrong way to see the world. Maintaining a non-partisan affiliation has long been thought to be an important component to keeping high levels of public trust on both sides of the aisle. And there is little evidence that the public is able to effectively distinguish between retired and active duty officers. So, any time a retired senior leader publicly admonishes a sitting president, they risk that the general public will mistake their personal opinion for that of the institution they represent.

But what the civil-military community gets wrong is that by saying any and all involvement is bad for military non-partisanship is also to say that there is no situation in which retired military officers, with three and four decades of service to and leadership of this country, should be allowed to fight for their profession. Instead, we should be thinking about the situations in which retired officers who speak out may actually preserve rather than degrade the norms of non-partisanship. This, I would argue, is exactly one of those times.

Civil-military relations are full of behavioral norms; indeed, very little about how civilians and the military are supposed to interact is written into law or otherwise codified. Norms are useful for two distinct reasons. First, they provide the unwritten guidelines to behavior and generate a set of general expectations for “healthy” civil-military interactions. But perhaps even more importantly, the breaking of norms acts as a kind of alarm bell that signals to both the community and the broader public that something is terribly amiss. Deliberately undermining establish norms, especially norms that we think of as critical to the health of the profession, serves as a way to “break glass in case of emergency.” Seen in this light, norms are made to be broken—but only as a last resort.

What does this kind of emergency look like? Again, the civil-military community has spent considerable amounts of time and effort exploring the conditions under which active duty officers should resign in protest or otherwise undermine the president. But the debate for retired officers has been less systematically evaluated, in many cases because retired flag officers do not de facto share the same restrictions on speech about the president and policies that the active duty must comply with. Even still, this debate is one that I have in my own classrooms in professional military education every year, in multiple forums: should generals exercise their new-found freedom of speech in policy, or should they stay silent to try and protect the military from appearing partisan—or even just political?

This debate always generates fierce discussion amongst my students, and there is rarely consensus even within a small seminar. And it is true that over time, the norm has broken down as an increasing number of retired general officers endorse political candidates and get involved in partisan politics. Even still, however, groups of retired senior officers speaking out against a president or his policies have been relatively rare. Indeed, the exceptions appear to point to a single cause that would prompt groups of retired senior leaders to publicly break with a sitting administration: actions that jeopardize the military’s ability to fight and/or maintain public trust in a significant way.

I would argue that we are in such a state of emergency again. The Trump administration has regularly and blatantly politicized the Department of Defense in ways the undermine the military’s ability to fight, recruit, retain, and keep public trust. The president has signed campaign paraphernalia on military bases, denigrated the opposition political party at major speeches in front of the troops, repeatedly refers to senior active duty military commanders as “my generals,” allows partisan media sources to influence decisions in military justice, revokes security clearances in retaliation for public criticism, and recently reached down to relieve a distinguished Navy Captain of command for making the administration look bad. The president’s repeated threats to use the military to establish “law and order”—which emerged in the late 1960s as a dog whistle to white Americans concerned about domestic unrest and civil rights—falls squarely within this pattern.

Without significant pushback by the military institution itself that signals its commitment to non-partisanship, that day may be closer than we realize. And yet, the active duty military are bound by oath and duty to obey and serve. And so the retired generals are the ones left on the front lines.

In each high profile case we see, retired flag officers are responding not to policies they don’t like, but instead to acts by the administration to insert partisan politics into the military. Admiral (Ret) William McRaven wrote an open letter to President Trump objecting to pulling former CIA Director John Brenan’s security clearance because of Brenan’s public criticism of Trump. Admiral (Ret) James Stavridis objected to Trump’s “unprecedented” intervention into Navy discipline that was sponsored by Fox News. And Admiral (Ret) Michael Mullen spoke out against Trump’s handling of the Crozier affair last month, criticizing Modly for exercising undue influence and jeopardizing the ability of the Navy to encourage its middle leadership to “speak truth to power.”

These acts all send strong signals precisely because they are rare, and in many cases being done by leaders like Mullen who have previously expressed a strong commitment to restraint. They did not wake up one day and decide to issue public statements about the administration’s handling of events because they decided that norms of non-partisanship are unimportant.

Rather, these statements send a strong signal to both the uniformed military and civilians writ large that politicization is not appropriate. To civilian leaders in Congress who might be tempted to look the way, they force accountability and a response. To the public that might doubt the nonpartisan nature of the institution, they signal protest against politicization. And to the uniformed members who might be tempted to politicize a response in anticipation of political elites, they remind leaders of the importance of being non-partisan and objective.

These retired generals have spent three and four decades in service to their country and those they’ve commanded. They have valuable expertise, but also a lifetime of understanding about civil-military norms and the kind of conduct that can irreparably damage the relationship.  We should listen to what they have to say.

“We are not okay. And you shouldn’t be either.”