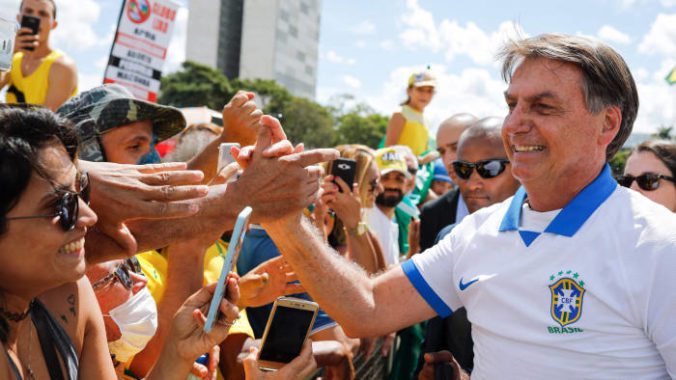 This is a guest post from Julie VanDusky-Allen, Olga Shvestova, and Andrei Zhirnov. Julie VanDusky-Allen is an assistant professor at Boise State University. Her research focuses on both formal and informal institutions, legislative organization, political parties, political participation, and support for and satisfaction with democracy. Olga Shvestova is Professor of Political Science and Economics at Binghamton University (SUNY). Professor Shvetsova’s research focuses on determinants of political strategy in the political process. Broadly stated, these include political institutions that define the “rule of the game” and societal characteristics that shape goals and opportunities of the participant players. Andrei Zhirnov is Associate Lecturer in Quantitative Methods in Social Science at the University of Exeter. He received his PhD in Political Science in 2019 from Binghamton University and studies political institutions and electoral systems.

Yet, to fully understand the COVID-19 policy responses in these countries, we need to look at responses not just at the national level, but also at state level, as Argentina, Brazil, and Mexico are all federal systems.

The three indices, total, state, and federal, are measured daily for each state daily. Each is normalized and hypothetically ranges from 0 and 1, with higher values indicating a larger response by the government.

Comparing Policy Responses
To compare federal and subnational public health policy responses to COVID-19 during the onset of the pandemic in Argentina, Brazil, and Mexico, we use PPI data from February 1, 2020 to April 30, 2020. We designate April 30 as the end of the pandemic onset phase because the global pandemic response was monotonically non-declining (escalating) during that period.

Across the three nations, there are three different patterns of national-subnational public health policy action.

While Figure 1 displays the individual responses at the federal and subnational level, it is also important to analyze how the combined federal-subnational responses contributed to the overall response in each country.

To this end, we calculated the total overall government response in each country, weighing each subnational response by its proportion of the national population.

The resulting index tells us the total policy protection of the average resident in each country from February 1 until April 30. We display the results in Figure 2 below.

While the data in Figures 1-2 tell us the strength of the adopted policies in each country, they do not consider the duration of policies.

To this end, we develop another measure that captures both the strength and duration of policies. The State Level Cumulative PPI is calculated for each subnational unit for each day by summing all PPI values prior to and including that day in that subnational unit.

We display the results in three histograms in Figure 3. The values represent the distribution of the State Level Cumulative PPI for all subnational units in each country from February 1 to April 30.

The histograms suggest that the average State Level Cumulative PPI in provinces in Argentina was higher than in Brazil and Mexico across the entire period.

And while states in Mexico and Brazil had similar State Level Cumulative PPI levels, there was quite a bit more variance in Brazil.

We also developed a Cumulative PPI measure that captures both the strength and duration of overall federal and subnational policies in each country. The Cumulative PPI is calculated for each day by summing all weighted PPI values prior to and including that day. We display the data in Figure 4.

This information, combined with the information from Figures 1-3, suggests that Brazil and Mexico had comparable levels of public health policy protection. But the two nations reached those levels via the policy responses of different types of government.

In Brazil, it was mostly through state policy, and in Mexico, it was through a combination of state and federal policies. We discuss how these three different patterns of federal-subnational responses evolved in each country below.

A Strong Federal Response in Argentina

In Argentina, even prior to the confirmation of the first case on March 3, the federal government acted. In February, the government monitored and isolated travelers from countries with confirmed cases.

After the first confirmed case, a few provinces closed schools, closed their domestic borders, closed down non-essential businesses, and required residents not to leave their homes unless necessary.

On March 12, the federal government declared a state of sanitary emergency and began to restrict travel from countries heavily affected by the pandemic. It also shutdown entertainment venues, restaurants, and schools nationwide.

On March 19, the federal government declared a complete lockdown throughout the country. All nonessential businesses were closed. People were not allowed to leave their homes unless necessary. Security officials strictly enforced this lockdown.

The map in Figure 5 below displays the total COVID-19 response (PPI) at the provincial level, reflecting the strength of public health policies by federal and provincial governments that were in effect from March to April.

The map demonstrates that there was a strong and uniform public health policy response to the pandemic’s onset in Argentina.

The Rise of the Brazilian States

In direct contrast to Argentina, the Brazil federal government took a laxer approach to addressing the virus.

Early in the crisis, President Bolsonaro publicly dismissed the dangers of the pandemic and dubbed it a media fantasy. As such, the federal government did not pass many measures to mitigate its spread.

In early February, the federal government did begin encouraging but did not mandate that individuals who were exposed to the virus or had traveled to the places with the virus would self-isolate.

The first confirmed case in Brazil was on February 25. But it was not until mid-March that the federal government began to adopt stricter policies to mitigate the spread of the virus.

It imposed partial international travel restrictions from countries with a large number of cases. It also declared a state of emergency and allowed individuals from vulnerable populations to work from home.

In early April the Brazilian Supreme Court confirmed the states’ concurrent powers to address the health crisis and ruled that states had the power to determine which businesses stayed open.

Since President Bolsonaro was resistant to adopting policies to mitigate the spread of COVID-19 in Brazil, state governments such as Pernambuco, Goiás, Bahia, and Santa Catarina took the lead in addressing the crisis.

Of note, many states declared a state of emergency before the federal government did. Almost every state shut down schools early in the pandemic. Most states shut down non-essential businesses, bars, restaurants, and entertainment venues. Some also placed strict restrictions on social gatherings. In April, some states adopted the mandatory use of face masks.

In the map in Figure 6 below, we display the total levels of COVID-19 Protective Policies (PPI) in each state in Brazil, taking into account both federal and state policies effective for the states from March to April.

The first COVID-19 case in Mexico was confirmed on February 28. At this point, the federal government began isolating individuals with suspected infections.

In mid-March, the government shut down schools and partially shut down the land border. Towards the end of March, the federal government began placing strict restrictions on social gatherings and allowed vulnerable individuals to stay home from work.

On March 30, a federal state of emergency was declared, which closed non-essential businesses and entertainment venues, and people were asked to not leave their homes unless necessary.

And in mid-April, the government restricted movement within the country to and from areas with the most cases. At the same time as the federal government was responding to the crisis, state level policymakers worked to develop their own state level responses.

Several governors adopted emergency declarations. A large number of states closed non-essential businesses and entertainment venues even before the federal government did.

Several states independently restricted social gatherings and often had stricter measures than those by the federal government.

And some states placed stricter restrictions on travel than did the federal government. Of note, the northern border states of Coahuila, Nuevo León, and Tamaulipas coordinated their efforts and asked residents not to travel between states unless necessary.

In April, some states restricted public transportation and mandated the use of facemasks in public spaces. The map in Figure 7 displays the total levels of COVID-19 Protective Policies (PPI) in each state, taking into account both federal and state policies effective for the states between March and April.

The data in the map demonstrates that public health policy response to COVID-19 in Mexico was weaker and less uniform than it was in Argentina, but also slightly stronger and more uniform than in Brazil.

Public health policy making in response to COVID-19 onset progressed very differently in Argentina, Mexico, and Brazil. Due to Argentina’s strong federal response, there was a strong, unified effort throughout the country to address the onset of the pandemic.

Brazil and Mexico had similar responses overall, but due to two different processes. States rather than federal government led Brazil’s response, and Mexico’s response was a combination of state and federal efforts.

It is too early to say at this point how much the policies that governments adopted early on in each country have contributed to the overall epidemiological landscape in these nations.

While these are only initial observations, given the variation in government policies across the three countries, it is worth taking a closer look at whether overall government policies influenced cases and deaths per capita, after controlling for other relevant factors.

However, although we can only make preliminary conclusions about the effects of policies on health outcomes, we can draw more definitive conclusions about political incumbents’ commitment to adopting costly public health policy efforts in slowing and stopping the pandemic onset.

It is clear, based on the index, that the federal government in Argentina was far more willing than the Brazilian and Mexican federal governments were to commit to addressing the onset of the virus despite the economic costs of adopting stricter policies.

Mentoring Yourself as a Woman in Academia