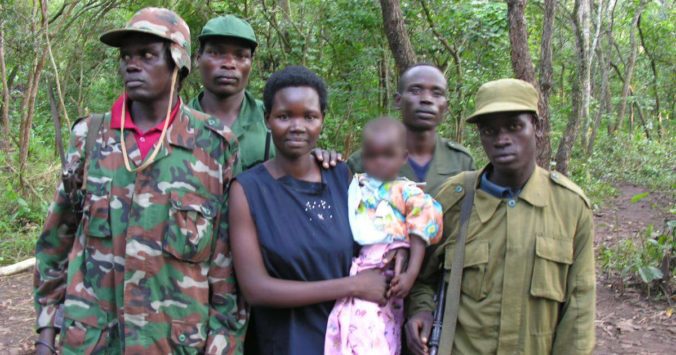 Evelyn Amony: one of Joseph Kony's wives, author, and survivor of forced marriage

This is a guest post from Phoebe Donnelly (@PhoebsG86), a Visiting Fellow at the Feinstein International Center at Tufts University and a Women and Public Policy Research Fellow at Harvard Kennedy School.

The UN’s International Day for the Elimination of Conflict-Related Sexual Violence (CRSV) passed without much recognition on June 19. However, CRSV has not disappeared during the global pandemic and victims of different forms of CRSV face additional hurdles to accessing services and support. Certain survivors in particular, those in forced marriages with members of rebel groups, may face even more challenges in escaping cycles of violence because of the ways in which forced marriage binds them to their partners and rebel groups. Due to the increased challenges for survivors of CRSV, it is a useful time to understand one common and less visible form of CRSV: forced marriage.

My research on two rebel groups in East Africa – al-Shabaab in Somalia and Kenya and the Lord’s Resistance Army (LRA) in Uganda – explains why rebel groups across the globe perpetrate forced marriage. My co-researchers and I interviewed 150 survivors and perpetrators of forced marriage and people living among them across Uganda, Kenya, and Somalia between 2017-2018. These interviews highlighted essential patterns in forced marriage.

1. Forced marriage is distinct from rape and sexual slavery. Forced marriage is commonly defined as “a situation in which the perpetrator through his words or conduct, or those of someone for whose actions he is responsible, compels a person by force, threat of force, or coercion to serve as a conjugal partner resulting in severe suffering, or physical, mental, or psychological injury to the victim.”

While rape can be a part of forced marriage, forced marriage implies a continuous relationship with a “conjugal partner” which makes it distinct from rape.  Victims of forced marriage don’t know how long they will be tied to their husband and suffer lasting stigma as a result of the marriage. In Uganda, women forcibly married to members of the LRA, despite having been released over fifteen years ago, spoke about social stigma, challenges earning a living, and physical and verbal abuse they currently faced.

The difference between forced marriage and sexual slavery also rests on the idea of a conjugal partnership. Forced marriage is not just a sexual crime, but is an attempt to formally bind a woman to a rebel group member. Labeling the coercive relationship a marriage and incorporating marital traditions contribute to the unique harm caused by forced marriage. Interview participants in Somalia shared that they were particularly pained by the ways in which forced marriage by al-Shabaab broke with local marital practices and isolated  women from their families and communities. As a result of this distortion of tradition, locals labeled forced marriages perpetrated by al-Shabaab members as “illegal marriages.”

2. Forced marriage is used for ideological and strategic reasons. My research shows that rebel groups use forced marriage when they want to create a new idealized future society. Since its formation in 1987, the LRA has abducted over 66,000 youth in northern Uganda and forcibly married at least 42 percent of the females who stayed with the group over two weeks. Forced marriage was key to the LRA as part of its goal to create a new Acholi ethnicity in northern Uganda. Other groups use forced marriage as part of cultivating an image in line with their religious beliefs. Al-Shabaab in Somalia wanted to appear as “pious” Muslims who respected women. Interview participants spoke about being told that they should marry members of al-Shabaab as part of their religious duty.

On the strategic level, the LRA used forced marriage to bind group members who were abducted to create families. Creating families provided a familiar organizational structure for young forcibly recruited members with no prior military experience. There were hierarchies within LRA families (for example, first wives had seniority) and family members were responsible for supervising each other and preventing members from escaping.

3. Not all rebel groups use abduction to facilitate forced marriage as the famous cases of the “Chibok Girls” in Nigeria in 2014 or the LRA’s abduction of 139 schoolgirls at St. Mary’s College in northern Uganda in 1996 might suggest. Al-Shabaab used a different model when it forcibly married women and girls in Kismayo, which it controlled from 2008-2012. In Kismayo, al-Shabaab stalked, as well as physically threatened or used violence against the families of women and girls who refused their “proposals.” In other cases, women in Kismayo accepted proposals from al-Shabaab fighters because of fear and/or for economic survival.

A large piece of the puzzle towards preventing rebel groups from perpetrating forced marriage starts with identifying and disseminating information about rebel groups using this tactic. Rebel groups often deny or conceal the use of forced marriage because it can provoke a backlash from their supporters or societies where they operate. Additionally, governments and international organizations need to plan ways for women currently trapped in forced marriages to safely escape, find shelter, and reintegrate into society.

Rebel groups continue to perpetrate forced marriages across the globe, yet scholars and policymakers know little about this form of CRSV. As the world deals with the devastating effects of the coronavirus pandemic, we cannot forget about survivors of CRSV including women trapped in or trying to escape from forced marriages.

The networks and hidden procedures that keep discrimination alive in academia

Hagia Sophia and the Multi-Level Politics of Heritage