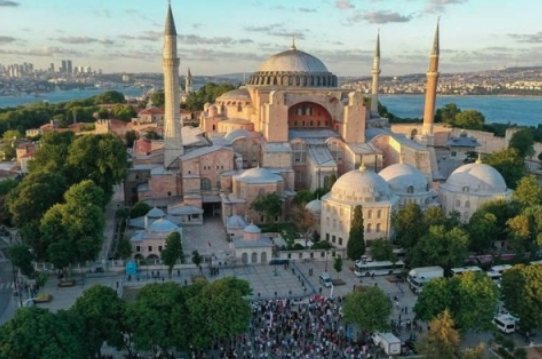 Hagia Sophia and the Multi-Level Politics of Heritage

This is a guest post from Elif Kalaycioglu, who is an assistant professor at the University of Alabama. Her research is on international relations, world order and global governance with a focus on UNESCO’s world heritage regime, global cultural politics and the impact of cultural diversity on the international order and its institutions.

On Friday, June 10th 2020, the highest administrative court in Turkey annulled the 1934 cabinet decree that transformed Hagia Sophia from a mosque to a museum. UNESCO’s press release, lamented the decision concerning the world heritage site and urged Turkey to protect its universal value as an architectural masterpiece and the symbol of interaction between Europe and Asia. Speaking shortly after the court decision, Turkey’s President Recep Tayyip Erdogan declared that as a mosque, Hagia Sophia will remain the common heritage of humanity in “a much more sincere way.”

This is not the first status change for Hagia Sophia. It began its life as a cathedral in the Byzantine imperium. It was converted into a mosque after the conquest of Istanbul by the Ottomans in 1453. Following the founding of the Turkish Republic, a 1934 cabinet decree transformed it from a mosque to a museum.

This post analyzes the two most recent status changes of Hagia Sophia guided by the key insight of heritage studies that heritage is adjudicated from a present political vision, draws selectively upon the past, and projects this vision into the future. Both status changes entail particular conjunctions of domestic and international political presents. Specifically, Friday’s decision demonstrates and reproduces a long-standing domestic turn away from the Republic’s earlier orientations towards secularization, modernization and the West. Taken in a context of economic woes and policy disillusionment, it reminds Erdogan’s constituency that the country is still on the path to this desirable future. Internationally, it takes place at a time when the universalist visions of the post-WWII order, including that of UNESCO’s world heritage, are under increased strain.

Scholars of critical heritage studies have long contended that heritage is not simply, or even primarily about the past. Rather than being a reflection of the past, they argue, heritage is adjudicated from the present. This adjudication rests on particular socio-cultural and political visions for the community. The past is selectively approached as the source of traditions that can support this particular vision. The final temporal element is the future. Having established a claim on the present and supported it with a selective reading of the past, heritage is to be preserved and passed onto future generations, as a way of ensuring the continuity of a particular iteration of the community.

While moments like the conversion of Hagia Sophia from a museum to a mosque bring into sharp relief the intersection of heritage and politics, the starkness of the encounter often results in the analysis that this is a politicization of heritage. And yet, as the above description suggests, politics runs through heritage, often in much more mundane ways. This includes the state-led curation of heritage through the construction of monuments that celebrate its sovereign victories or the elevation of certain religious or secular events to the level of national holidays. Such endorsement of heritage is congruent with an imagined political community, fosters it through a particular cultural history, and projects it into the future.

Importantly, it is not only nationalist-populist projects of heritage that are attached to political visions. Cosmopolitan-universalist projects, such as UNESCO’s World Heritage regime operate in structurally similar ways. In that case, the imagined community is “humanity,” understood in universalist, reconciliatory terms. To foster this humanity in the present, a shared cultural heritage is curated by selectively drawing on a history of aesthetic, cultural production. Likewise, the goal is to foster shared identification with a set of sites deemed “world heritage,” and through those sites, with the community of “humanity.”

Within this temporal schema, a changing politico-cultural present can create “dissonance” with the existing narratives and objects of heritage. Examples of dissonance include colonial heritage in postcolonial contexts and Soviet heritage in post-Soviet countries. These sites are dissonant because they do not fit the dominant project of identity construction. From the perspective of those in positions of power vis-à-vis the construction of a dominant identity, dissonant heritage presents a challenge. This challenge of “past mastering” in relation to a changing present can take the form of eliding, which ignores dissonant sites, destruction, which eliminates them, or reinterpretation, which seeks to bring them within the framework of dominant norms and identities.

Reinterpretation brings us to the multiple status changes Hagia Sophia has gone through, and particularly its early Republican conversion from a mosque to a museum, and the present decision to transform it into a mosque.  The question at stake is, under what present visions of political communities did these status changes unfold, and what kind of past mastery did they entail?

Politics of Becoming a Museum/World Heritage

The World Heritage Convention was signed in 1972 and placed under UNESCO. At the crux of the world heritage regime is the idea that certain natural and cultural sites in the world exceed temporal, national and regional boundaries on account of the “outstanding universal value” they possess. These sites constitute the shared heritage of humanity.

To become world heritage, sites are nominated by states that have territorial sovereignty over them. These nominations are evaluated by an Advisory Body, comprising independent international experts. They are inscribed on the World Heritage List, upon approval by an intergovernmental World Heritage Committee.

Monumental artefacts in historic areas of Istanbul, including Hagia Sophia, were nominated as world heritage by the Turkish state in 1984. The positive expert evaluation emphasized the “political will to safeguard a number of privileged sites with the aid of the international community.” This takes us to the domestic and international present from which Hagia Sophia was adjudicated as a museum and a common heritage of humanity.

Domestically, Turkey was still pursuing the secular, modernizing and Western-oriented Republican project. This project, initiated by the Republic’s founder Ataturk, is symbolized in Hagia Sophia’s status change from a mosque to a museum, which signaled at once the domestic secularization and the international orientation to the Western-led international order. This status change was no less an encounter of heritage with a political vision, and it was similarly enacted in a top-down manner, with a cabinet decree.

Then, the Western-led order itself had not yet come under the ideational-institutional strains it has been facing in the last decade. In fact, at the time, other states such as Assad’s Syria and Sadat’s Egypt eagerly participated in UNESCO’s world heritage regime, nominating sites such as the Nubian Monuments and Palmyra, signaling their willingness to take part in the modernist, universal cultural politics pursued by the international institution.

As we fast forward to 2020, the present from which Hagia Sophia’s status is re-adjudicated, we can note that for conservative nationalists, which did not identify with the political project of a secular, Western-oriented republic, the act of turning Hagia Sophia into a museum was the source of dissonance. Thus, celebrating Friday’s decision, pro-government columnist  Gulerce re-published an op-ed he wrote thirty years ago: “We want back what was cut off from our history, faith, culture, national dignity, state honor…The hesitations of ‘But what would the United States, the West say?’ should be removed over this country.”

Friday’s decision sits similarly at a present context that is both domestic and international. Domestically, it entails a long-standing transition away from the original vision of the Turkish Republic, steered by President Erdogan and his Justice and Development Party. This transition away from a secular, western-oriented republic seeks to replace it with a conservative polity, which draws much more strongly on its Ottoman past. In fact, the decision to transform Hagia Sophia into a mosque adjudicates it not only as a Muslim, but also as an Ottoman heritage.

But that is not all. As commentators have noted, until last year, Erdogan chose not to weigh in on the debate on Hagia Sophia. Since then, he has been a vocal supporter of the transformation, in a move that has been interpreted as an attempt to distract from the economic hardships, policy failures and waning popular support among his base. In this context, the re-adjudication of Hagia Sophia acts as a reminder of the broader stakes of the political vision, and signals that Turkey is still moving towards a desirable future for this conservative base, rather than being mired in a present of economic hardship and other disillusionment.

What about the international dimension? It is no secret that the Western-led ideational-institutional framework of global politics is under duress. The cultural-political projects associated with this global political order have felt this duress earlier on and more acutely, as their universalist claims were countered by modifications, resistance or refusal by new participants in global politics. UNESCO’s universalism has similarly come under challenge and criticism, including the contention that local value is the proper grounds for the identification, valorization and preservation of heritage.

On the one hand, Erdogan’s assertion “They dare telling us not to transform Ayasofya into a mosque. Are you ruling Turkey or are we?” is testament to the loosening hold that the international normative-institutional frameworks have on the country. On the other hand, the turn away from the international is not so simple. Speaking after the court decision, Erdogan declared: “Hagia Sophia, the common heritage of humanity, will go forward to embrace everyone with its new status in a much more sincere and much more unique way.” The sentiments were echoed by the presidential spokesperson Ibrahim Kalin, who asserted that Hagia Sophia will always belong to world’s historical heritage, it will be open to visitors of all faiths and that the art historical elements will be preserved.

What is at stake then is not a simple disavowal of the international for the national. Rather, in congruence with Turkey’s recent international posturing, the demand is to take part in global politics while challenging its existing contours. The challenge is to a secular, reconciliatory, universal, which links Hagia Sophia’s value to it being an architectural masterpiece and testament to interactions between Europe and Asia, best reflected in its status as a museum. This is countered by a different vision of humanity, which claims that it continues to be open to all, but under different functions and values.

That all remains to be seen of course. What is clear, however, is that the multiple status changes Hagia Sophia has gone through have always been adjudicated from particular political presents. Each domestic/international present has entailed a reinterpretation of the site’s meaning and ownership, drawing upon a particular subset of its histories. The latest decision, while structurally resembling the early Republican one in its top-down political execution, manifests and reproduces significant political shifts in Turkey’s domestic and international vision.

It is also in this light that we can make sense of the international reaction. While articulated in terms of universal value, and aesthetic conservation, it in fact betrays worries about the loss of a particular international political vision, embodied in but not limited to the Hagia Sophia decision.

Beyond the Open Skies Treaty