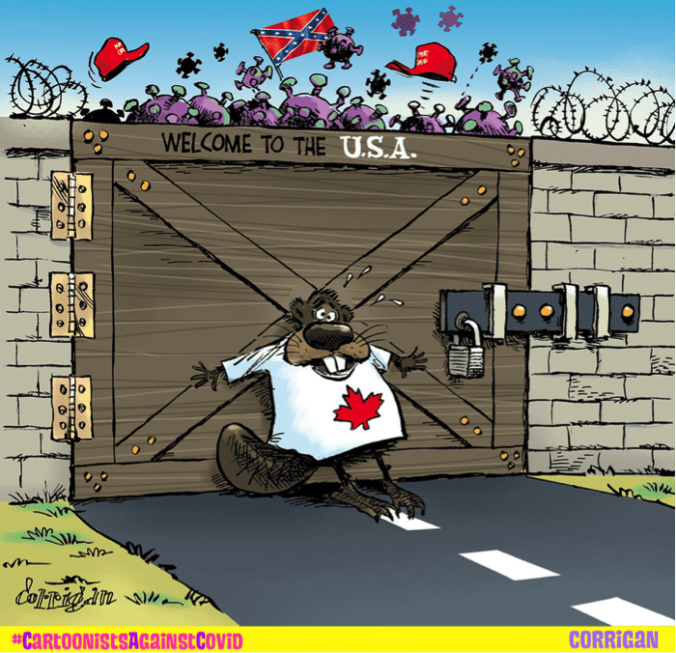 Love, Loathing, and Loss: America’s COVID-19 Response and the View from Canada

This is a guest post from Jennifer Mustapha and Eric Van Rythoven. Mustapha is an Assistant Professor at Huron University College in London, Ontario and studies the politics of the War on Terror, globalization and development, and Southeast Asian regional relations. Rythoven teaches International Relations and Foreign Policy at Carleton University, Canada.  His work has been published in Security Dialogue, European Journal of International Relations, and Journal of Global Security Studies, among others.

For many observers America’s catastrophic response to COVID-19 is a far-off spectacle rendered all the more inscrutable by the country’s power and position. For Canadians however, the experience is more akin to watching a close friend spiral into a crisis of shockingly irresponsible behaviour.  Not only is their tragic circumstance a threat to the safety of others, but we face the added grief of knowing that someone we care about has chosen such a destructive path.

We write this because America occupies an invaluable place in the Canadian political imaginary. It is the ubiquitous ‘other’ that haunts almost every thought and conversation in Canadian politics – and it is failing in a way that has stunned the Canadian public and policymakers. But America is also our kin – a bigger “sibling state” that we live in perpetually close proximity to –and Canadians are struggling to reconcile our familial relations with its increasingly rapid descent into darkness. In this blog post we offer some preliminary thoughts on what this failure looks like from a Canadian perspective. We organize our discussion around three sentiments – love, loathing, and loss – that summarise the conflicting, and often contradictory, feelings Canadians are experiencing from this side of the border.

When we teach Canada-US relations we often use our discipline’s sterile language of ‘amity’, ‘alliance’, and ‘security community’ to describe the relationship between the two countries.  But the truth is simply this: Canada loves America.  No, we don’t mean all Canadians love all Americans – Carolyn Parish quickly dispels that myth – and we can admit that a condescending vein of anti-Americanism often cuts through Canadian political discourse.  But there is no denying the deep and enduring affection between our two countries, borne out of decades of interwoven history and culture.  We have long shared a commitment that our relationship is special. We are enmeshed, bonded, and dependent on one another.

We love your money – the American and Canadian economies are closely intertwined and 75% of Canadian exports go to the US. We love your security – Canada often enjoys unparalleled military and intelligence cooperation with the United States. We love having the world’s longest undefended border.  We love that we can travel, visit, live, and work in the United States with relative ease.  We love your sports, your arts, and your culture; so much so that we fear it will eclipse our own.  We even love your constitution, your laws, and your political leaders–at least some of them.

This affection bubbles up in a variety of ways.  The hospitality of Gander, Newfoundland, in taking in 6,700 airline passengers stranded on 9/11 is now mythic in Canada-US relations and has become a canonical part of the stories we tell.  The so-called ‘Bromance’ of Trudeau and Obama served as an easy stand-in for broader feelings of amity between our countries. And public polling of Canadians captures an enduringly favourable view of the United States despite the increasingly widespread loathing for its present leader; the version of America he has come to represent; and the ways that the Trump Administration has repeatedly imperiled our close relationship since he took office in 2017.

Appreciating this context matters because as Butler (2016) reminds us, not all relationships or lives are grieved equally. To be grieved, one needs to be acknowledged as a life that matters.  The more a life is known, appreciated, and even loved, the more acutely pain is felt at its loss.  America, we do not simply know you.  We love you.  And that makes the grief of the present all the more difficult to bear.

Relationships can be complicated and the Canada-US relationship is no exception.  Running alongside the affections described above is a serious and growing antipathy towards both the current administration and Americans more broadly. In a survey conducted earlier this spring Canadians were asked what word first comes to mind when thinking about the United States.  The five most common responses were “Trump”, “President”, “Chaos”, “Confused”, and “Bully”.  50% of respondents expressed a negative sentiment while only 6% expressed positive sentiments (the remainder were coded as neutral).  But while this downward trend clearly started before the pandemic, there are several reasons why America’s response to COVID-19 has made things worse.

The first of these has to do with the border. Borders are a central feature of how states define and determine their limits, inclusions, and exclusions. They connect us and they separate us. They are often fluid and shifting, and renegotiated as needed (Basaran 2008). The Canada-US border is no exception. With almost $2 billion dollars in daily cross-border trade, any disruption to the free flow of goods, services or people across the Canada-US border represents a severe challenge to bilateral interests.  Prior to the COVID-19 pandemic, the suite of security measures that typically governs our shared border reflect that fact.  Specifically, the various policies and programs of the post-9/11 Ridge-Manley “Smart Border Declaration” were designed to facilitate the continued movement of “safe” and “low-risk” goods and people through an otherwise increasingly fortified border.  In 2017, Canada even agreed to a highly contentious expansion of American legal authority in “pre-clearance” areas on the Canadian side of the border, all in the name of facilitating movement at the border.

The emergence of the novel SARS-Cov-2 virus has further complicated the politics of the border.  In March both countries agreed to an unprecedented closure of the border to all non-essential travel in a bid to slow the virus.  Yet, while Canada has been able to slow infection rates across the country, the United States has exploded as one of the global epicenters of the virus.  Now, in a move that is hugely unpopular with the Canadian public, Canada is starting to feel pressure to open the border.  On July 3rd an open letter from 29 bipartisan members of Congress called for the Canadian government to ease border restrictions while Trump has mused about re-opening the border from as early as April.  This puts the Trudeau government in a deeply uncomfortable bind: ease border restrictions and risk a resurgence of infection rates, or keep the border closed and risk retaliation from one of the most unpredictable administrations in history.

Beyond the border, the Trump administration’s efforts to block our and others’ access to critical pandemic-related supplies has deeply disappointed Canadians. In April it was reported that the Trump administration attempted to stop the US company 3M from exporting N-95 masks to Canada. 3M ultimately refused, but Trump’s move was seen as serious enough by the Canadian government to elicit a retaliatory threat to block Canadian nurses from crossing the Windsor-Detroit border to work in US hospitals. This is part of a larger pattern of apparent bad faith behaviour as the US has reportedly diverted PPE shipments set for other countries as well, including Brazil, France and Germany. When combined with reports that the United States is hoarding almost the entire global supply of remdesivir it becomes clear that their domestic COVID-19 response is directly linked to widely-felt disruptions in global supply-chains.

Finally, it is not just the American government that is raising the ire of Canadians in relation to COVID-19.  To the dismay of many Canadians, American “culture wars” over measures like mandatory mask laws are beginning to spill over into Canadian public discourse.  A smattering of organized groups are holding “anti mask” and “anti distance” rallies around Canada, and one could be forgiven for assuming they got their talking points from their American COVID-denier counterparts. There have also been a number of stories in recent weeks of Americans entering Canada and flouting public health rules.  Instead of self-isolating for 14-days Americans have been spotted hiking in national parks and driving around border towns. In July, two separate American couples were fined 2000CAD each for failing to quarantine upon arrival in Ontario. The ensuing COVID-19 related hostility towards Americans has now escalated to the point where even Canadians driving with American license plates have experienced harassment, vandalism, and, in at least one case, an alleged physical assault. There are even Reddit threads discussing who you should report “suspicious” American license plates to.

Importantly, the Canada-US relationship has had its share of ups and downs. Disputes, conflict, and contestation are not alien to the Canada-US relationship and there are plenty of examples we can point to.  But what seems so unprecedented in the current context is the level of actual animosity involved, and how this increasingly carries through into our most quotidian interactions.

It’s difficult to appreciate the Canadian perspective without understanding the role of loss.  To be clear, Canada has not escaped COVID-19 unscathed: as of writing this almost 9,000 Canadians have died and 115,000 have been infected by the virus.  Yet the much larger scale and gravity of the American loss overwhelms us.  Pictures and stories of death and illness bleed across the border into the largest America-focused media market in the world outside of the United States.  Each time we debate easing public health restrictions in Canada, the experiences of Florida, Arizona, California, Georgia and Texas loom large with ready-made arguments for the costs of moving too quickly.

Finally, the loss here is not simply about the disease.  Canadians are grieving the loss of America as a stable and reliable ally.  In the history of Canadian foreign policy there are two enduring anchors that have shaped our orientation towards the world: the first is a commitment to multilateralism, especially in the context of ‘liberal’ institutions like the United Nations; the second is an intimate, though often uneven, relationship with the United States.  Both of these anchors are now under strain.  Canada recently suffered a lost bid to secure a seat on the UN Security Council–the second such defeat in 10 years, leading to tough questions about the role of multilateralism in our foreign policy.  At the same time, the United States is withdrawing from the world and continues to threaten Canada with tariffs and unpredictable behaviour. It is becoming increasingly difficult for Canadians to regard the United States as a reliable – or even desirable – ally.

The loss of these two anchors raises uncomfortable questions about Canada’s place in the world.  Part of the issue is Canada’s status in the future international order.  Insofar as Canada remains inexorably coupled to its “bigger sibling-state,” the vivid failures of the United States in the face of COVID-19 hints at a future where a declining America brings Canada right down with it.  In other words, while the United States is undergoing its own “exit from hegemony”, there are growing anxieties over what this exit means for Canada.  And the issue here is not simply a loss of status, but a loss of certainly.  If there is one overarching lesson Canadians can draw from the coronavirus pandemic, it is that we are no longer certain that the United States can be relied upon – not to share resources, not to coordinate policy, and certainly not to save lives.