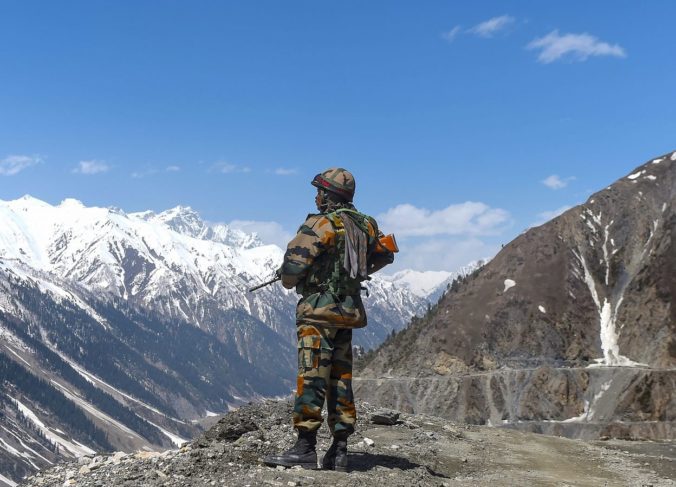 This is a guest post from Aniruddha Saha, a PhD student at the Department of War Studies, King’s College London. His research examines India’s nuclear policy using a constructivist approach and is currently being funded by a King’s International Postgraduate Research Scholarship. He has also recently published with Strategic Analysis, OpenDemocracy, Eurasia Review and The Quint.

With the killing of 20 Indian soldiers by the Chinese army along the disputed Line of Actual Control (LAC) on June 16, several dimensions of the violent border skirmishes between India and China have come to light. Research has shown that the brewing Sino-Indian crisis since early May remains unprecedented ― since at least a decade. More recently, Clary and Narang have argued in ‘War on the Rocks’ that in the backdrop of the current COVID-19 crisis, the response options of the Modi-led Indian government to the Chinese threat “range from bad, to worse, to truly ugly.”

However, the current responses taken by the Indian administration to the crisis seems to contradict the direct confrontational actions that it has recently taken in response to other threats, notably from Pakistan. Therefore, the more pertinent question to ask is: Whether this high degree of apprehension of the Modi government (and the moral compromise of its own retaliatory standards) to deal with the Chinese translates to ‘defeat’ in the absence of a full-blown conventional war?

1.   The Downplaying of the Chinese Incursions

A statement from the Indian Ministry of External Affairs (IMEA) on June 17 had stated that “the Chinese side sought to erect a structure in Galwan valley on our side of the LAC.” Three days later, in direct contradiction to the IMEA, Modi remarked at an all-party meeting that “neither anyone has intruded into our territory nor taken over any post.” However, fresh satellite images that surfaced on June 22, clearly showed signs of Chinese construction in the Galwan Valley.

It is unusual for the Indian Prime Minister to downplay territorial incursions. In February last year, when a Pakistani terrorist outfit killed 40 Indian security personnel in the Pulwama region of Indian-administered Kashmir, India’s Mirage 2000 fighter jets crossed the Line of Control (the de-facto border that separates Indian administered Kashmir from Pakistan administered Kashmir) and carried out bombings against terrorist camps in Balakot. Another example is from September 2016 ― in response to a terror attack in Uri that claimed the lives of 18 Indian soldiers Indian troops crossed the Line of Control into Pakistan-administered territory and carried out a ‘surgical strike’ against border terrorism.

Since these incidents and with Modi’s 2019 speech in Gujarat, he cemented his image as a leader who aggressively responds to military threats. In light of the current Indo-Chinese crisis, this image has undoubtedly been shaken as he has remained extremely careful against issuing direct confrontational statements against China. In a national radio programme on 28 June, titled “Maan ki Batt”, Modi did not even for once utter the words ‘China’ or ‘Chinese’ to refer to the skirmishes along the LAC. More recently, India’s Defence Minister Rajnath Singh, cancelled his trip to the disputed Ladakh border and Modi’s visit to the region “went only up to Nimu, just 35km from Leh airport and nowhere near the Line of Actual Control.”

Modi’s position towards the current crisis is also starting to have serious implications in domestic politics. Opposition leaders have already started accusing the current Indian government of maintaining a soft stance against the recent Chinese aggression. Furthermore, in seeking re-election for his on-going second Prime Ministerial term under the banner of the Bharatiya Janata Party (BJP), Modi had actively used the Uri incident to buy into the patriotic pulses of the Indian voters. Therefore, Modi’s downplaying of the current situation in the Galwan Valley may succeed in taking away fire-power from future BJP election campaigns. Also, it could raise questions of credibility pertaining to double standards: Unlike Pakistan, Modi’s ‘New India’ backed down when faced with a Chinese neighbor having greater offensive material capabilities.

On June 29, the Indian Ministry of Electronics and Information Technology issued an interim ban against 59 Chinese-owned applications and stated that these apps were “prejudicial to sovereignty and integrity of India, defence of India, security of state and public order.” While the tradition of boycotting foreign products in a show of opposition can be traced back to India’s pre-independence days, the recent move by the Indian government again falls short of the self-imposed and more aggressive standards of taking the fight back to adversaries

The banning incident comes a few days after the Indian government was accused of failing to pick up on intelligence reports in the region and also ignoring the constant alarms raised by local regional leaders. There can be speculation as to whether India’s humiliating defeat in the full-blown war against China in 1962 still makes India reluctant to take military action against Chinese aggression. However, in more concrete terms, the interim ban can also be perceived as the Modi administration grasping for some sort of response ― to desperately save its own image after being rather uncharacteristically questioned on several fronts on its aggressive retaliatory intentions.

Furthermore, the banning of Chinese apps is not an ‘unprecedented response’ against an ‘unprecedented Chinese move.’ In 2017, the Modi administration had placed a similar ban on Alibaba’s UC Browser after the latter came under the scanner of being a spyware. The Indian government had also asked all Indian defense officials and personnel to uninstall more than 40 Chinese apps. Even though China has criticized the more recent ban to keep up the anti-against India, the latter seems to have already compromised its more hard line position by shifting its stance of a Pakistani ‘surgical strike’ to a ‘soft strike’ against China. As the Indian economy has already taken a huge hit due to the COVID-19 pandemic, there have also been questions raised by skeptics on the feasibility of this move, as India imports about five times more from China than it exports to the latter.

While it is well-known in academic, policy and military circles that China’s offensive capabilities largely exceeds India’s, there are several other alternatives that the Indian government can explore. Even though the Modi government recently changed the ‘rules of engagement’ that currently allows Indian troops in the LAC to use firearms against ‘extra-ordinary’ circumstances, such measures would likely benefit the stronger military side in case of a full-blown conflict.

There would be immense international pressure in order to prevent the two nuclear armed neighboring states from engaging in a full-fledged conventional war. In case the border situation continues to escalate, the Indian government can exploit these normative concerns to simply indicate better preparedness of the Indian side against a Chinese attack.

First, this could include entering into new talks for the procurement of conventional defense equipment with other nations as this would indicates that India still exercises an uncompromising attitude in modernising its conventional strike forces ― even when faced with an adversary like China that has greater military capabilities. Second, India could ramp up diplomatic support to states that share similar concerns of Chinese expansionist policies. Third, India could explore ways of  engaging in diplomatic discourse with China that balances the articulation of India’s regional power status and India’s simultaneous willingness to diffuse the current border tensions. Finally, while the US Trump administration has been vocal in backing India in the conflict, India has also received support from France and Germany. Therefore, it can specifically use these acknowledgments as a bargaining chip and discourage Chinese confrontation by indicating that the clashes are enhancing international support for India ― something that China has always been wary of ― and isolating China further in the region.

The Virus in the Digital Domain: How Governments Can Respond To Coronavirus-Themed Cyberattacks