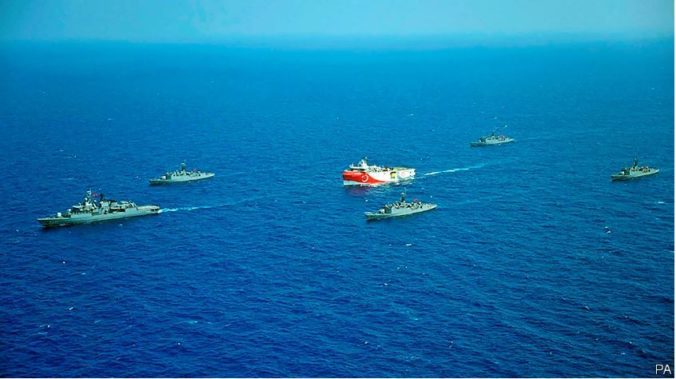 We open each of my undergrad classes with a discussion of current events. In the past four years, there have been several times that students have wondered whether a war may be about to break out: between America and North Korea, America and Venezuela, India and China, Qatar and Saudi Arabia…America and Iran. We spend a lot of time talking about the issues, the motivations for each state’s behavior. And when “nothing” happens, I always wonder whether all the time we spent was worth it.

I’m wondering the same thing about tensions in the Eastern Mediterranean. If the situation defuses without conflict between Turkey and Greece, will all the attention we’re paying to it have been worthwhile? And will this register as a “case” worth explaining for international relations? I argue that it should, and suggest a few ways we can approach it.

First, some background. As this piece from The Economist helpfully explains, the situation arose from Israel discovering natural gas reserves in its territorial waters. This set off a scramble among other states in the Eastern Mediterranean to find, and exploit, their own reserves. Problems arose over what counts as territorial waters, with Greece claiming expansive rights due to its many islands and Turkey challenging that. There has been sabre-rattling on both sides, with Greece recently moving to buy arms from Western states to counter Turkey’s military. These tensions occur in a broader context of Turkish-Greece mistrust, dating back to the breakup of the Ottoman Empire, the Greek revolt in the 1800s, or the Ottoman seizure of Constantinople, depending on whom you ask.

Besides a collision between Turkish and Greek naval vessels, there has not been any outright hostility. The most likely outcome is a tense stalemate, with repeated eruptions of anger as new gas finds emerge. If fighting does break out, it’s likely to be a minor exchange rather than a full blown war.

If that’s “all” that happens, will this episode still matter to IR? By that I mean will it register as something we need to analyze and explore? Or does the fact that it fell short of war mean “nothing happened?” Is, as I’ve argued here before, inertia the norm for IR?

One could make a case that it wouldn’t really matter. Structural theories like Waltz’s Theory of International Politics admit that a lot of things happen in the international system we don’t need to study. Ultimately, wars and balancing alliances among great powers are what IR should ultimately focus on.

Alternately, one could argue that it matters because “nothing” happened. That is, we could study why Turkey and Greece didn’t go to war. What led to their restraint? Prudence, recognition of the costs of war, external mediation? There may be a good dissertation waiting there.

But I think there are some “positive” takeaways from this episode. I.e. aspects about a case of tensions short of war that we can study on their own terms:

This fits with a broader theme I’ve raised here, on expanding what we think “counts” in IR. Ideas matter even if the attempt to act on them fails. Cases that wouldn’t really show up in a regression analysis can still be important. And tensions short of war are worth of study.

Of course, it’s possible they may actually go to war, in which case disregard all this.