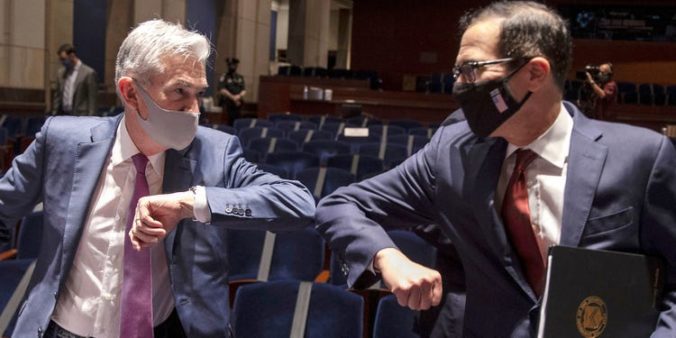 This is a guest post from Walter James, a PhD candidate in the Department of Political Science at Temple University with an interest in comparative political economy of financial regulation.

The Federal Reserve has stood as a bulwark between COVID-19 and another Great Depression in the United States. But it must tread carefully to maintain its reputation and legitimacy once the crisis passes.

Since COVID’s arrival in the United States, the Fed has acted with unprecedented speed by cutting its federal funds rate to close to 0%, purchasing massive amounts of securities, providing dollar liquidity to other central banks through international swap lines, and establishing lending programs for both Wall Street and Main Street as well as to state and municipal governments. Just in the last six months, the century-old central bank has flexed all of its monetary, regulatory and lending muscles at its disposal and acquired new ones along the way.

These moves have boosted the Fed’s legitimacy as an effective organization that stands ready to put its shoulder against the wheel when crisis strikes. In his monumental study of central bank power, Paul Tucker defines legitimacy as the public’s acceptance of the authority of state institutions. When financial institutions, investors and the public hold them in high regard, central bankers’ decisions, communications and forecasts command authority.

A poll by the Pew Research Center in March showed that 69% of respondents held a favorable view of the Fed in March 2020, up from 58% in early 2017. This upward trend will surely continue with the Fed’s swift and decisive response to the COVID recession.

But in the post-pandemic future, the Fed needs to think carefully about its public image to maintain its legitimacy. This means continuing to stay above political quarrels, communicating frequently about macroeconomic projections and policy decisions, and engaging closely with a wide range of economic stakeholders.

The idea of an independent Fed has always been a myth. As Sara Binder and Mark Spindel detail, the Fed and Congress are bound in an interdependent relationship – Congress needs the Fed to steer the economy and absorb public blame, and the Fed needs the lawmakers for political support for its actions.

Fed officials understand this. As former central bankers Ben Bernanke and Kevin Warsh explained, the Fed’s autonomy is limited to its monetary policy – it doesn’t extend to its regulatory responsibilities – and its actions must still be accountable to democratic scrutiny. After all, a central bank is an institution embedded in government and economy.

Even if its independence is imperfect, though, it’s critical that the Fed remain above politics to maintain its legitimacy. Chairman Jay Powell succeeded in this admirably by ignoring Trump’s trash talk for the past two years.

More difficult than ignoring the President’s tweets is to make sure that the Fed’s actions don’t inadvertently pick winners and losers after COVID. Recently the Fed hired BlackRock to advise its purchase of commercial mortgage-backed securities and corporate bonds. Delegating financial decisions to a firm with real expertise is understandable, but the decision caused some stir among journalists, who rightly worry that this move would further empower an already-giant asset management behemoth.

Another, less obvious danger is for Congress to pressure the Fed into invoking its emergency measures to bail out sectors of the economy in the future. Historical analogs of this difficult balancing act between parochial electoral imperatives and prudent economic policies are not hard to find. Plagued by the twofold problem of inflation and high unemployment in the 1970s, for example, the Fed succumbed to pressures from Congress and Presidents Nixon and Ford to keep interest rates low. Even then, the central bank failed to overcome stagflation.

In the last few months, the Fed’s actions set an important precedence which politicians might seek to exploit under more normal downturns in the business cycle. Programs like the Paycheck Protection Program Liquidity Facility and Main Street Lending Program can be tempting for elected politicians to urge the Fed to continue under more normal economic downturns. The lending facilities have precise expiration dates, and the Fed should resist calls by Congress to reenact them in the future. Emergency measures shouldn’t become part of the routine toolkit.

The most obvious way to maintain legitimacy is to ensure transparency and closely engage with a wide range of stakeholders.

The last two decades have seen a revolution in the way central banks around the world communicate with market participants and their political principals. Alan Blinder and colleagues note that central bank communication, particularly in the area of monetary policy, has become “truly a worldwide phenomenon” as it became increasingly clear that communication is a critical tool in influencing the market’s expectations and making central bank policy more predictable. The empirical literature they review largely confirms this.

Thankfully, the Fed seems to be taking the rights steps during the current COVID crisis. Soon after hiring BlackRock for its asset purchases, the New York Fed posted its contract with the firm, with explicit details about the modest fees to be paid to the asset manager. This is a marked improvement in the Fed’s transparency effort compared to 2008, when it also brought in BlackRock for rescue operations but failed to publicize the terms of the contract.

But while central bank communication in the form of press releases, Congressional hearings, and web posts can inform market participants and politicians, they’re not sufficient to engage with the wider public who are rationally ignorant about esoteric financial policy. To reach the average citizen, Andrew Haldane of the Bank of England called for a “second revolution” in central bank communication, which “would require central banks to engage with, and draw on, the general public – their ‘folk wisdom’ – as never before.” For the Bank of England, this has meant “Town Hall”-type meetings with companies and regular citizens to gauge key issues shaping the economy, as well as to educate them about what the central bank’s mission and activities.

The Fed is slowly catching up to this second revolution in interacting more directly with the public beyond well-heeled financial elites. Last year, all 12 branches of the Fed plus the Board of Governors in Washington hosted the “Fed Listens” event series. These events explored questions relating to the Fed’s dual mandate of maximum employment and stable prices. The Board of Governors revived the event virtually again in May of this year, with participation by organizations of workers, educators, affordable housing advocates, retirees, small businesses, and community financial institutions.

Whether we like it or not, the Fed will continue to gain powers in times of crises. The Fed’s legitimacy and effectiveness will be better served by combining these powers with clear and frequent communication and institutionalized interactions with the broader public.

What game theory taught me about last night’s presidential debate